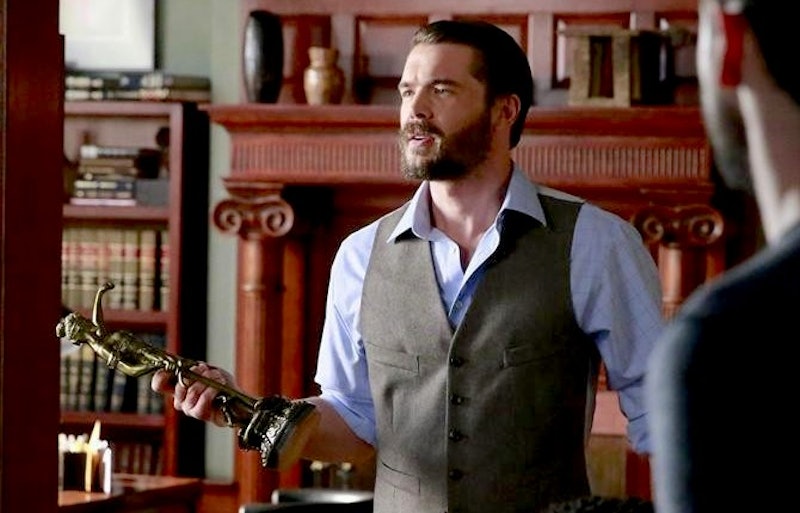 Enough about the ring, Frodo! Something is bugging me about my new favorite show and nobody is talking about it. We don't know where the trophy's scales are on How To Get Away With Murder . I am being completely serious: The contested icon and "get out of an exam free" card has scales that dangle from Lady Justice's raised hand. Once the trophy leaves Annalise's house on the night of Sam's murder, the scales are gone and the Lady is raising an empty fist.

Symbolism aside, check out the above photo of Frank: Those scales are GONE. This could spell doom for the Keating Five when How To Get Away With Murder returns from the break in January. Maybe they're still at the house and Frank can cover again. That's the best case scenario. However, I think that the scales got wrapped up in the carpet with Sam's body. If that is so, they could be in any number of incriminating places. They could be in the woods, Connor's car, or worst of all: in that dumpster with the remains of Sam's body.

I'm starting to think that Michaela's missing engagement ring was a red herring and what's going to get them caught is this piece of the murder weapon that is unaccounted for. I feel like this is so important that the next episode back is going to be titled "Where Are The Scales?" or something similar.

And because this is so huge, let's retrace everyone's steps on Bonfire Night for clues as to where the scales could be:

First, here's our Lady with her scales on Asher's shelf before Michaela snuck in and stole her. Hi, Lady!

This is right after Sam was pushed down the stairs and is lying unconscious. There's the trophy and you can clearly see the scales dangling. So they aren't at Asher's apartment. We know that much.

Here is the scene immediately after Sam was struck with the trophy. No scales. So they must have fallen off when Wes swung at Annalise's husband. I don't see anything else metal and glinty on the ground. Are they across the room? Under Sam's body? It would seem fitting if he had them in his hand, because look at how his body is posed just like Lady Justice. Like I said, this whole thing is rife with symbolism. An engagement ring and the scales of justice — how poetic.

There you have it.

Plain as day, from this point on the trophy is missing that crucial piece. Someone, eventually, has to notice that they aren't there. My guess is it will be Asher Millstone, poor guy. Asher knows Michaela took the trophy (though they are good lawyers and they could get him to doubt himself) and he saw Connor's car at Annalise's house. Once the scales are found and trophy is associated with Sam's remains, the whole thing is like dominos. Frank "finding it on the porch" is not a strong enough explanation under fire.

This has been bugging me for weeks, and the fact that the midseason finale didn't address it makes this unanswered question all the more tantalizing. At least now I know, or have a good guess as to why Wes didn't immediately notice something off about the trophy and retrieve the scales himself from the scene of the crime. He was too distracted by Annalise sitting at her desk, cool as a cucumber like she was posing for the world's spookiest portrait.

Which begs the bigger question: why didn't master of getting away with murder, Annalise, notice the lack of scales? Why didn't anybody notice, really? I guarantee that this tiny mistake will be what brings the whole operation down.