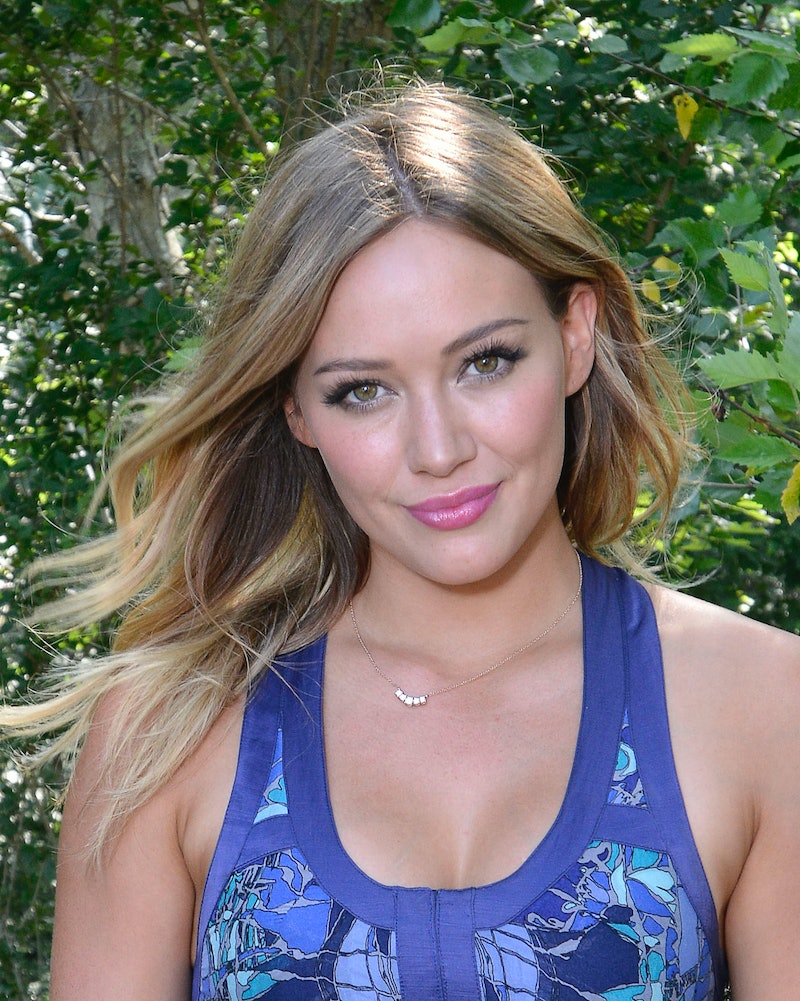 I had no idea that when Hilary Duff said she'd love to do a Lizzie McGuire reunion, she'd thought about it so much. BuzzFeed recently asked the actress and singer where she thought Lizzie McGuire would be today, and Duff gave an incredibly detailed answer that showed just how much Lizzie is still on her own brain. (Which is good, because she's still on my mind pretty often too. Those hairstyles were legendary and should never be forgotten.) Basically, Duff described what the character would be up to in 2014, and gave us the perfect Lizzie McGuire reunion movie plot all in one go.

I think she’d go off to college and potentially become a little cooler than she was, but still not bitchy at all. I think she’s just the biggest-hearted girl ever. Maybe she’d move to New York for a while, and her parents would probably follow her and rent an apartment secretly. I think she’s pretty smart. I can imagine her being on a path to something really special and great, but I feel like she’d still be working her way through the office grind and she’d probably constantly embarrass herself—mishaps in the office all the time. And she’d probably still be wearing butterfly clips, bringing it back!

Seriously is that not the best movie premise ever? She even added in the drama of having her parents follow her to New York. I can just imagine the hissy fit that move would bring on from Lizzie. "Mom! Come on, I'm an adult now. Stop treating me like a child!" And then cue door slam à la 7th grade.

There aren't really any excuses not to do a reunion at this point now that Duff saved the writing team the trouble of thinking up a plot. I love the idea of small-town, big-hearted Lizzie McGuire in the big city. The only thing I didn't like about Duff's 2014 version of her character is that she doesn't see Gordo in the picture anymore. "I don’t think she’d be married to Gordo," she told BuzzFeed. Sigh. I know it's irrational to think she'd end up with her middle school boyfriend but Gordo was just so perfect.

At the same time, though, I kind of appreciate that Duff envisions Lizzie's future as one of independence. She's on a path to doing something great in New York City, instead of being permanently linked to a boy. And thank goodness she didn't end up with Ethan or something. He was cute, but oh-so-dumb.

Duff knows her character, and she's obviously put a lot of effort into thinking about where she'd be today. So who better to trust with the plot of a reunion film than Hilary Duff herself? Hollywood better get on this because the actress came up with the perfect premise and now someone just needs to get filming.