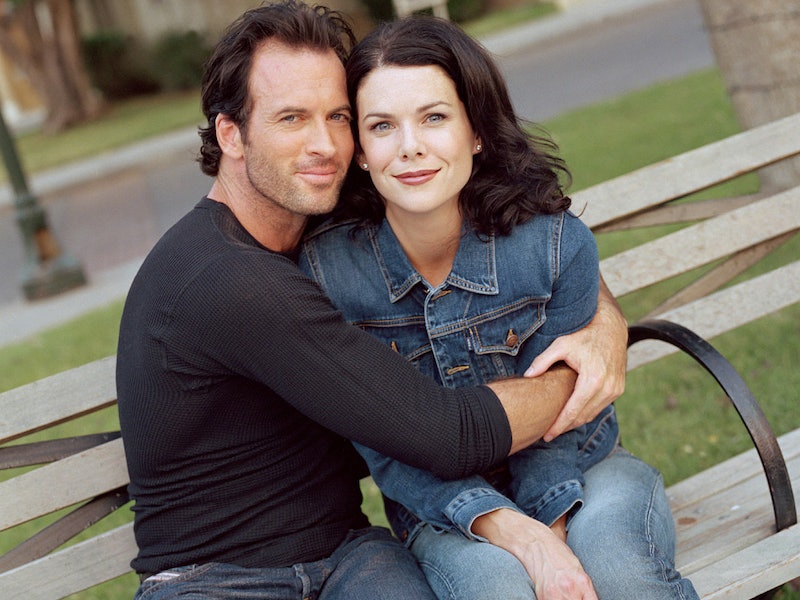 When it comes to an insanely well-written series like Gilmore Girls, it can be hard to narrow down a favorite season, let alone a favorite episode. I mean, they're just all so good. So smart. It's like asking me to choose just one snack at the movie theater. I WANT THEM ALL! That being said, now that Gilmore Girls is on Netflix, I've spent many sleepless nights re-watching countless episodes of the series and have, at the very least, managed to select my favorite Christmas-related episode. (Hey, it's a tough job, but somebody's gotta do it.) So after weeks and weeks of research (and more cups of coffee than I can count), I made my decision. The best Gilmore Girls Christmas episode begins and ends with the Season 1, Episode 10 classic "Forgiveness and Stuff."

You know the episode I'm referring to, don't you? The one where Richard is rushed to the hospital during a Christmas celebration, which sends the entire Gilmore clan (and Luke) into emotionally uncharted territory. As we all know, Richard and Emily Gilmore have never been the world's greatest communicators, especially when it comes to things like feelings. But this episode allowed viewers to see a softer side to Lorelai's usually strict parental figures and remind us that underneath all of that fighting and criticism, lies a family who loves each other above everything else.

See what I mean? To see two such stoic and strong people become so vulnerable, even for a moment, is a pretty powerful thing — and one that has never failed to give me all the feels. Seriously, you guys, just try not to feel something in this moment. I dare you.

But it takes more than a family death scare to make this a truly stand-out episode, which is where Luke and Lorelai come in. Since she found herself un-invited to her parents' annual Christmas party, Lorelai headed over to Luke's for dinner, where she confessed to him how much she had been looking forward to eating all the festive Christmas-themed food. So as a way to help cheer her up, Luke made her THIS:

That's right. He made her a SANTA BURGER! As in a burger that looks just like Santa. In other words, one of the sweetest gestures ever seen on the small screen or in the universe in general. Granted, I doubt it would taste very good. (Is that white stuff mayo or sour cream???) However, the intention was beyond heart-warming and further demonstrated why Luke Danes is the ultimate TV boyfriend. It doesn't end there, though.

As soon as Lorelai learns of her father's hospitalization, Luke immediately shuts down his diner so that he can drive her to the hospital and remains by her side the entire time. Poor Luke hates hospitals and there he is, sticking it out for someone he truly cares about more than either he or she knows at this point in time. But it's moments like this that made it clear even back in Season 1 that these two were endgame.

And if that isn't enough to fill you up with the holiday spirit, then I don't know what is.