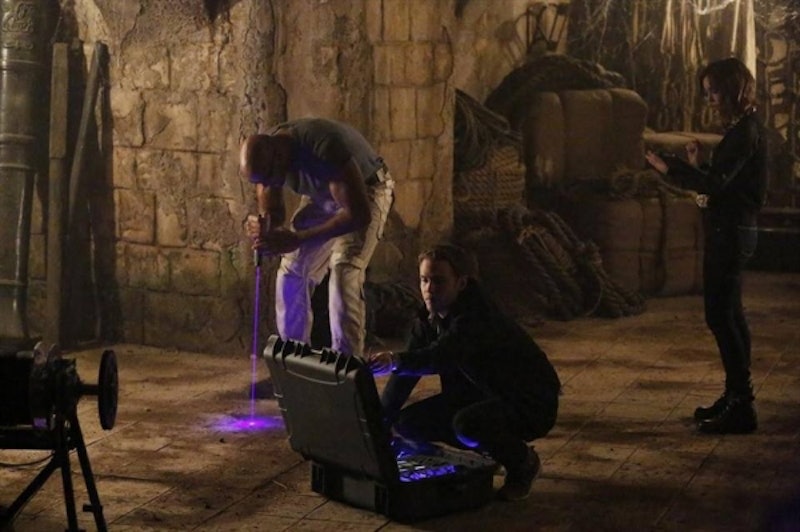 The theory that ABC's Marvel's Agents Of S.H.I.E.L.D. is leading to an Inhumans storyline has gained so much steam among viewers of the show and denizens of the internet that it is almost taken as fact at this point. This assumption is based largely on two clues: 1) The blue-skinned alien from Season 1, which most people take to be a Kree, and 2) Coulson's blueprint of an alien city, which sort of looks like Attilan, the movable capital of the super-powered beings. According to this theory, Skye is half-Inhuman, the Diviner probably has something to do with Terrigen Mist (the substance that turns humans into Inhumans), and the "temple" that everyone is looking for is actually the Tomb of Randac (the scientist who created Terrigen Mist).

But not everything in the Inhumans theory makes as much sense as some wish it would. Terrigen Mist couldn't create the "extinction-level event" Whitehall is after; a TV show would be unlikely to have the budget necessary to convincingly render Attilan; and, most damningly, the Inhumans movie is still four years away — would Marvel Studios president Kevin Feige really let S.H.I.E.L.D. blow the lid on some of the film's biggest reveals so far ahead of time? What if, god forbid, this theory were incorrect? Is there another story from the Marvel universe that could possibly explain the blue-skinned alien, Skye's extra-terrestrial heritage, and the "temple," all in one fell swoop? Actually, there is!

The Priests of Pama were a small pacifist sect of the blue-skinned Kree race. (The Kree are the ones who created the Inhumans.) Banished from their home planet for opposing the Kree wars, the Priests were exiled to a prison planet. There they encountered a celestial villain named Star Stalker, who attempted to consume their planet before they rebuffed it. The Priests then spread throughout the galaxy in pairs as sentinels watching for the return of Star Stalker. Two of them settled in Vietnam and built a temple.

Meanwhile, a man named Gustav Brandt met a woman named Lua Nguyen while working in Vietnam. They fell in love and had a baby. Sadly, the family was attacked by Lua's disapproving crime lord brother Khruul; Lua was killed, and Gustav left his infant daughter... with the Priests of Pama. The pair of Kree raised the human child, teaching her martial arts and grooming her to be the Celestial Madonna. They planned to marry her to the oldest living Cotati, a race of sentient plants (no, not like Groot — he's a Flora colossus) in hopes that she would bear the Celestial Messiah, "the most important being in the universe." They named her Mantis.

At the age of 18, the Priests wiped Mantis' mind and implanted her with manufactured memories of growing up in a Vietnamese orphanage; they then sent her out into the world in order for her to gain human experience to complement her alien upbringing.

In this theory, the blue-skinned alien remains a Kree — most likely one of Mantis' alien guardians. The temple is the home of the Priests of Pama, not the Inhumans. And, naturally, Skye herself would be Mantis. Of course, there are a few discrepancies: Skye was found by S.H.I.E.L.D. in China, not Vietnam; Skye's mother was killed by an immortality-seeking Nazi, not her brother; and the temple on the show is located underneath Puerto Rico, according to this sneak peek of Episode 9, "...Ye Who Enter Here." But the Marvel Cinematic Universe has twisted small details before, and enough here matches up to make this a compelling theory.

And no, if you're remembering Mantis as a green-skinned lady with antennae, you're not crazy. But that appearance only manifested after she mated with the Cotati; before that, she looked like a totally normal human girl. It's all starting to come together...

So, if the Priests of Pama theory is the correct one, then what will Coulson's team find when they enter the temple? Probably one of Skye's/Mantis' blue-skinned surrogate parents. According to TV Guide, this week's episode will "finally reveal that [the] mysterious blue man from outer space — the one whose rejuvenating blood saved the life of Director Phil Coulson — is a member of the humanoid Kree race." How better to unveil this revelation than to have the S.H.I.E.L.D. team enter the temple and come face-to-face with a living, breathing Kree? Just hopefully not this one:

The one mystery that remains unanswered by either the Inhumans or the Priests of Pama theory is the damn Diviner. We still don't know what the heck it is. Leading speculation is that it's either a Terrigen Crystal or an Infinity Stone — but we should also be prepared for the possibility that it's an original fabrication for the show and has no basis in the pages of the comics. Whatever it is, it binds together Skye, her mother, and Raina. So what do they have in common? Are they all part Inhuman? Part Kree? Part Cotati? Hopefully we'll finally get some answers this week.

Personally, I'm hoping that the Priests of Pama turns out to be the correct theory. In the comics, Mantis is a fairly important figure: she fought alongside Iron Man, Captain America, Thor, Black Panther, Captain Marvel, Scarlet Witch, and Vision against Thanos; and, on the page, she actually helped Peter Quill form the Guardians of the Galaxy by telepathically coercing Drax the Destroyer, Gamora, and others to join the team. If Skye is Mantis, that means there's a good chance that Chloe Bennet could be making the leap from the small to the big screen, and joining the Marvel Cinematic Universe for Guardians Of The Galaxy 2, Avengers: Infinity War, and more.