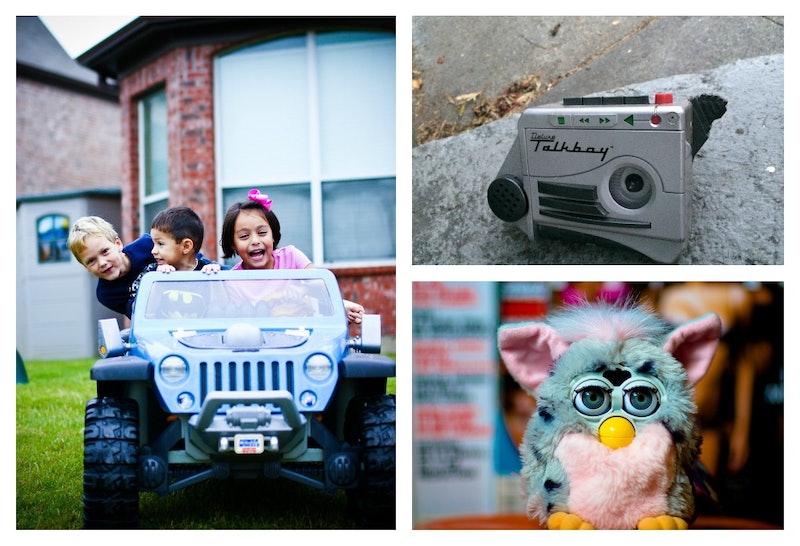 OK, yes, the winter holidays are really about spreading joy, showing appreciation for the awesome people in your life, and giving unto others, not just hoarding things for for yourself. But there's no denying it: For '90s kids, nothing was more exciting than running downstairs on Christmas morning, or lighting up the Menorah night after night, or doing whatever your holiday traditions called for, in anticipation of finding yourself rewarded with amazing new toys. What can I say? Kids are materialistic little things. It's been a long time since I've kept track of the "IT" toy each season; like most kids, though, I spent what probably amounted to way too much time on my holiday wish list each year with a careful eye to whatever the coolest new thing was. Obviously I didn't get everything I wished for year after year — my mom knew what she was doing when she told my brother and I that Santa would only accept three items and that he probably wouldn't be able to deliver on all of them — but coming up with the list was half the fun. These days, I put that same energy into coming up with holiday presents for all my favorite people in the world, so something about it must have worked. I love finding just the right gift for someone. Seems like a good use of those holiday wishlist skills.

I'm fairly certain that one of the reasons adults look forward to the holidays so much is for the nostalgia factor, so here. For Throwback Thursday this week, let's take a look at 15 toys every '90s kid wished for during the holidays Obviously this is by no means an exhaustive list; I had a heck of a time narrowing my initial brainstorms down to just 15, so you can imagine how many others either got left on the cutting room floor or simply didn't occur to me in the first place. Most of us probably remember the toys, the commercials, or both with a certain degree of fondness, though, so let's get ready to take a walk down memory lane. Happy December, everyone!

Made famous by the ill-fated Kevin McCallister, the Talkboy was originally created as a non-working prop for Home Alone 2: Lost in New York. After the film’s release in 1992, however, everyone wanted one — so Tiger Electronics made it a reality. Never before have so many children been that excited about a glorified tape recorder.

I usually file this one under “toys everyone wanted, but no one actually had except for that one kid who lived down the block from you.” Am I mistaken in my assumption that very few kids’ parents actually purchased a miniature working car for them?

This. THIS. What kid didn’t want a ping pong table, glide hockey table, and pool table, all in one? It was like a Transformer, only it launched cue balls instead of robot lasers. My brother and I actually received one of these during what was probably one of the most exciting Christmases of our childhood; apparently our dad had a hell of a time building it in the middle of the night without waking us up — but running downstairs to find it in the morning? Best. Thing. EVER.

Regular old roller skates? Way too unhip. Sleek, chic rollerblades was where it was at — as long as you didn’t mind wearing ridiculous amounts of padding while you shuffled your way around your driveway. Safety first.

I never really knew what to do with all those paper flowers I created with this thing, but they sure were fun to make. I remember attempting to use them as gift bows once and failing. Anyone else?

You might have wished for a Creepy Crawlers maker, too — but the Easy Bake Oven had the added bonus of making things you could actually eat. Always a plus.

Speaking of toys that make food…

A Barbie set that was also an ice cream maker? Heck yes. Technically this one is from the ‘80s, but even once the ‘90s rolled round, it never lost its charm. You can still get ‘em on eBay if you want to go vintage for the kids in your life this holiday season.

8. Some Sort of Gaming System

Depending on what part of the ‘90s you feel most nostalgic for, your specific gaming system might change; options from Nintendo alone run the gamut from the Game Boy to the N64, so take your pick (I went with a commercial for the original Super Smash Bros. here, partially because the newest one just came out and partially because it's the most memorable Nintendo commercial I can recall). Or go for a Sega… as long as it’s not a Dreamcast. Faaaaaaaaaail.

I’ve never witnessed one of these in action IRL, but I’m willing to bet they’re a lot creepier than they look in this commercial. Even so, she had a certain appeal — and I’m a sucker for dolls with gimmicks.

Under normal circumstances, sneakers wouldn’t be considered an exciting gift. When those sneakers had a gimmick, though? All bets were off. Reebok Pumps with their little squeeze-y air thing first hit the market in 1989; LA Lights from LA Gear, meanwhile, started literally lighting up kids’ feet in 1992.

Super Soakers may have been useless on Christmas Day itself if you didn’t grow up somewhere warm… but once summer reared its hot little head, you owned any water gun fights you had with the kids in your neighborhood. Originally sold by Larami, they’re now marketed by Hasbro as a Nerf toy.

If a Talkgirl and an Electronic Dear Diary had a lovechild, it would probably look and sound something like Talkback Dear Diary. The non-talking version first hit stores early in the decade; the Talkback variation followed up a few years later in 1996. Writing a diary entry by punching those little tiny keys wasn’t easy, but at least it didn’t try to auto-correct anything. Because duck that.

Remember my fondness for gimmicky dolls? Yeeeeeeeeah… I definitely had this one. Her color changing hair never worked quite as well as I hoped, but she was still a delight to find under the Christmas tree.

Trivia is so much cooler when it’s being taught to you by a miniature robot. The version seen here is the one from the early ‘90s — but did you know that 2-XL was actually around in 1978? I didn’t. Talk about an old geezer.

You know who I mean: Furby, Tamagotchi, Tickle Me Elmo, My Little Pony, American Girl dolls, Beanie Babies, and so on. We’ve already spoken at length about most of these suckers, so consider this entry their token inclusion.