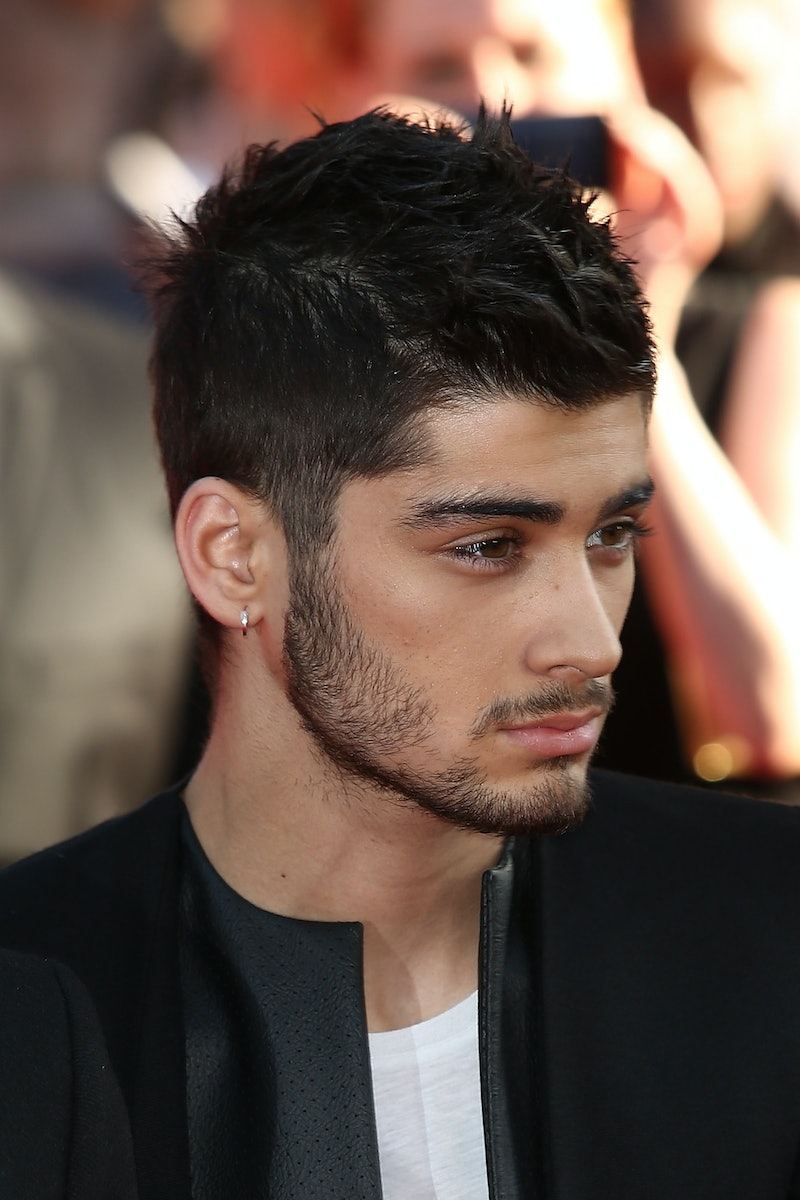 I am a woman well into her 20's and was around for the first batch of modern boy bands to roll into the new millennium: Backstreet Boys, 'N Sync, LFO, etc. You would think that those times are behind me, but as history has always proven, if there are teenage girls, there will be boy bands. But, wait, I'm not a teenager. Why do I like One Direction so much? As a well-adjusted grown woman (I sure hope so!), I was pleasantly surprised when many of my friends started crawling out of the woodwork to confess their love for the band. The talk seemed to mostly circle around Harry Styles, the floppy haired cutie with the Mick Jagger swag, but we know the main reason for this was his unabashed love for the older ladies. But no, not me. Zayn Malik stepped into the picture and he was was exact kind of guy I was always in love with: dark, handsome, brooding, and probably not very good for you. OOPS.

While I can't say I fall into the same category as the die-hard, obsessive Twitter and Tumblr fanbase One Direction's got going on, I can attest that Zayn's intense chocolate brown eyes sure have been enough to inspire some serious conversations amongst my fellow over-25-One-Direction-fans and there are plenty of things you should never say to the die-hard Zayn addicts. Let me tell you, being a Zayn Malik fan can be a tough life, but somebody has got to live it and I will proudly do it as I hang around with my Zayn cut-out. Just kidding.

Excuse me, but I am not here for "skinny shaming" and you know what, Zayn is only like 5'7" so he will always look tinier than the rest of the band.

"He has too many tattoos."

First off, it's not any of your business because it's his body and he is 21 years old, so he can very well do what he wants with it. With reported 42 tattoos to date, Zayn is slowly encroaching on Harry Styles' seat as most tattooed 1D member. I'm sure he will regret some of them in the future or want to remove them, but he has the money to deal with that bridge when it comes.

Along with the skinny claims, this one seems to be Zayn's sensitive spot. He most recently spoke out against Matt Lauer's claims about substance abuse on live television. Speaking to The Sun, Zayn said, "I'm really angry and upset by what was said on the Today show. I was really ill at the weekend. That's why I couldn't fly to America."

There are plenty of boy band members that may have a pretty face with no voice, or a great voice with not exactly the whole look. But in Zayn's case, he's got BOTH. If you actually listen to Zayn sing live, you can't really argue with the fact that he is probably the best vocalist of the band.

"He and Perrie are never gonna get married."

I'm one of the fans who isn't delusional enough to be planning my future wedding to Zayn Malik and I totally support his engagement to Little Mix's Perrie Edwards. Who am I to hate on a cute, talented, and very happy couple? Because of various postponements on their wedding, haters may think that it'll never happen but at least we know it's for a good reason, you know, traveling the WORLD. They were just spotted together in Weymouth, England happy as can be, so Zerrie LIVES ON.

Many people like to think that since Zayn usually sits back quietly in interviews and red carpets, he is conceited, pretentious, or just doesn't care. Since his beginnings on X Factor, he's gotten over some of his shyness, being in the spotlight and all, but sometimes that's just your personality and that's OK. There are plenty of other chatty ones in the band to take over, anyway.

I guess this can be attributed to his nonchalant attitude and recent missed appearances, but lots of people assume that he will be the first to leave 1D. Well, the boys themselves think this is just silly, and so do I. At a recent carpet for the AMAs, the boys were asked about Zayn supposedly leaving of the band, to which Liam joked, "If he is leaving, he's not doing a very good job." And what did Zayn have to say about this? "I'm here, I'm fine, we're a band, we're a unit." D'aww.

More like this
Kanye West Apologizes To Kim K "For Any Stress I Have Caused" In Rare Interview
By Jake Viswanath
Adam Levine Denies Having An Affair — But Admits He “Crossed The Line”
By Jake Viswanath and Radhika Menon
'School Of Rock' Changed Joe Keery's Life Forever
By Alyssa Lapid
Everything To Know About Taylor Swift’s 10th Studio Album, 'Midnights'
By Grace Wehniainen and Jake Viswanath
Get Even More From Bustle — Sign Up For The Newsletter