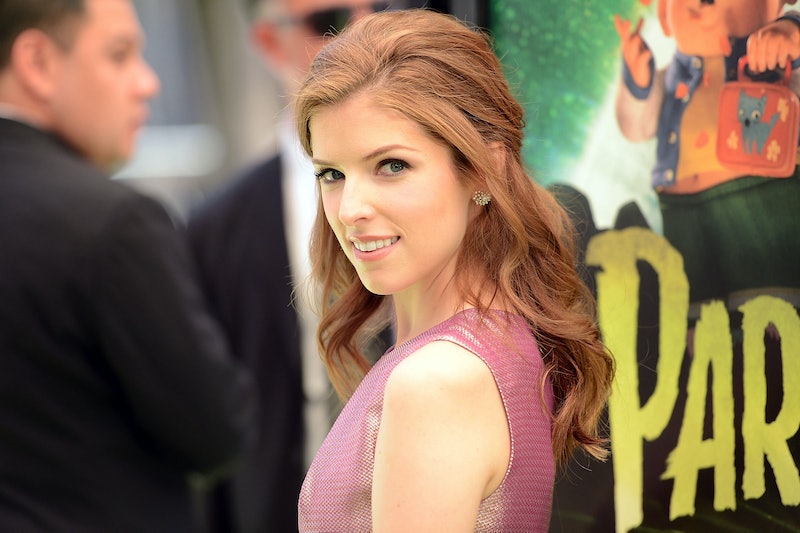 The world is in for a big treat. In the next year, we'll hear Anna Kendrick sing in not one, not two, but three musical movies. First up, she's Cinderella in Into the Woods later this month, then she takes on backwards romance The Last 5 Years in February. Then finally, she'll reprise her role as Beca in Pitch Perfect 2 next May — "Cups" and all. It's a trifecta of incredible music, and it reminds us all that Kendrick has built her career with song and dance. In fact, just over a decade ago, she kicked off her career singing in Camp, a movie centered completely around a performance camp.

Although her acting performances without music are equally incredible — like in End of Watch, Up in the Air, and 50/50 — it's always an added bonus to hear her voice. Offscreen, she's also a powerhouse vocalist, from her own chart-topping music video for "Cups" to singing for President Obama. It's time that she starts making her own music, perhaps even including a collaboration with Taylor Swift. She may think that singing is "hard as f*ck," but here's to hoping she keeps singing in almost every movie.

Kendrick's character Jill steps in after saying, "She's f*cked, I'm ready, and the godamned show must go on."

Even while singing karaoke drunk, she sounds amazing.

This rap-singing with Kendrick and Jake Gyllenhaal is the cutest thing you'll see today.

The shower scene that started it all.

The film took a short clip and made it a full song and music video. You go, Kendrick Coco.

The actress brought her red cups to Letterman for an adorable performance.

The only way to cure bus boredom.

Whenever Kendrick sings anything that was originally a rap, it turns to gold.

Still wondering how Pitch Perfect 2 will top this.

Kendrick stepped in for Idina Menzel to perform "For Good" from Wicked at Trevor Live in 2013.

At the 2013 Kennedy Center Honors, Kendrick put on a show-stopping performance of the Shirley MacLaine classic.

"Have Yourself a Merry Little Christmas" (2013)

For Christmas in Washington in 2013, Kendrick belted out this Christmas tune beautifully.

You can also, of course, hear Kendrick sing more in the Into the Woods trailer.

"You don't have to eat prosciutto" is the best line.

It will be the perfect Valentine's Day breakup movie.

More like this
Christina Perri Had No Idea Her 'Twilight' Song Is On YouTube's Top 100 Chart
By Radhika Menon
Amanda Seyfried Says She Felt Pressured To Shoot Nude Scenes At 19 Years Old
By Jake Viswanath
Twitter Is At Odds Over Taylor Swift’s Possible ‘All Too Well’ Oscar Run
By Brad Witter
What Is Ben Affleck's Net Worth? At 50, The Oscar Winner Makes 8 Figures Per Film
By Meg Walters
Get Even More From Bustle — Sign Up For The Newsletter