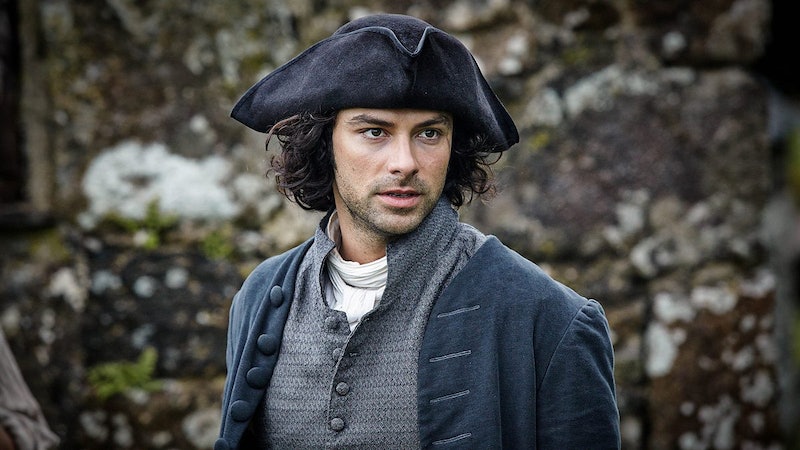 Step aside, Mr. Darcy, there’s a new resident period-drama hottie in town. Brooding, roguish, and undeniably handsome, Ross Poldark, the lead character in the hit miniseries Poldark , is a Revolutionary War veteran with a reputation for being a bold and reckless scoundrel. When he returns to his home in Cornwall in the 1780s, he finds his world turned upside down: His unofficial fiancée is now engaged to another man (his own cousin!), his father has passed away, leaving him significantly poorer, and, in the time he’s been away at war, his estate has fallen into total disarray.

Played by Aidan Turner in the Masterpiece PBS reboot of the 1970s Poldark series (which was based on a series of 12 historical novels by Winston Graham), Ross Poldark finds a way forward and proves himself time and time again the leading eighteenth-century man that period-drama fans have all been waiting for. Ross Poldark is the bad-boy-turned-gentleman who will capture your heart with his defiant spirit, his willingness to spring into action, and most of all, his nobility, in all senses of the word. Need more proof? Read on and see for yourself. (Warning: mild spoilers ahead.)

1. He's Not Afraid To Get His Hands Dirty

Usually refined and well-educated gentlemen need to maintain a respectful distance from all dirt and riff-raff. That applies to everyone except Ross Poldark. Although others in his acquaintance manage the mines from afar, Ross isn’t afraid to roll up his shirtsleeves (or take his shirt off entirely) and manage hands-on. In fact, he finagles financing to re-open his family’s closed-off mines and works side by side with his employees, entering the mineshaft and even excavating huge rocks himself.

2. He Looks Out For His People & Crosses Class Boundaries

Fearing that Ross will threaten his son’s relationship with Elizabeth, Ross’ former fiancée, Ross' uncle gives him money and tells him to scram because, as he says, “There’s nothing here for you, boy.” It seems true at the time, and Ross seriously contemplates (through a series of gratuitous close-ups of him gazing over some picturesque cliffs) trying his luck in London. But, in talking to the tenants in the area and seeing their dire working and living conditions, he recognizes his duty to them and sets out to rebuild the local economy starting with his family’s old mine.

3. He Has A Strong, Incorruptible Sense Of Justice.

When one of his tenants, Jim Carter, is down on his luck, Ross does everything in his power to help him. He gives him a house, and then offers him a job in order to help him provide for his pregnant wife and his mother and sisters. When the tenant gets caught poaching, Ross assumes responsibility and even serves as a character witness for him at court. Though others question why Ross gets so involved in the affairs of the working class, he follows his gut and makes an impassioned speech to the judge, pleading for leniency and a more merciful interpretation of the law.

4. He Believes In More Than The Pursuit Of Profit.

All the other gentlemen in town aim to maintain the status quo and possibly even widen the gap between the working class and the wealthy. They want to exploit their laborers and offer meager wages to keep them in their place. But, Ross is different. He believes in more than the mindless pursuit of profit; he believes in providing livable wages and good working conditions and in helping people so they can help themselves. Because he actually treats his workers as people, his employees are loyal to him. They work hard, fraternize with him, and protect him in times of danger.

5. He Has A Habit Of Rescuing People By Offering Jobs

While at the market one day, brooding of course, Ross rescues the poor but fierce Demelza who is under attack. He sits her down and gives her a meal, and he later discovers that she is on the run because her father beats her. Wanting to help, he offers a job in his household as a kitchen maid. Given his roguish reputation, townspeople suspect he has ulterior motives, but he goes ahead and hires her anyway.

When Ross returns home to find Elizabeth engaged to his cousin, Francis, he accepts her decision and doesn’t beg or seduce her or try to break them up. Furthermore, even though there are plenty of rumors swirling around town about him and his servant, Demelza, he waits a whole two years before giving into their mutual attraction and making the gossip true. Then, instead of discarding her like most other wealthy gentlemen would, he goes and marries her. He could have picked any one of the rich and eligible ladies in town, but instead, he chooses Demelza. This isn’t just a matter of falling in love with someone of noble blood without much money, letting his family down, and causing a minor scandal, as it is in Pride and Prejudice. Ross Poldark defies all sorts of societal expectations when he marries a peasant in his employ with little hesitation. He does what he wants based on his own moral code, which is possibly the most upstanding thing about him.

7. He Believes In Love & Second Chances

When his uncle bans his spinster cousin, Verity, from meeting up with an older sea captain with a shady past, Ross lets them rendezvous at his house in unabashed defiance of his family. Though he knows his uncle and cousin Francis will not approve, he does it anyway, trusting Verity’s love for the sea captain and choosing to see the best in people, whatever their history.

8. He Is Devoted To His Family

Ross may defy the Poldark family and their absurd conventions, but he is also devoted to them, when it comes down to it. Twice so far in the series, he has saved his idiot cousin’s life; first when Francis falls into a pool of water in the family mine, and later after Francis is injured in a duel with Verity’s sea captain lover. Also, despite Elizabeth’s abandonment and Francis’ cuckolding, he continues to offer them both support and friendship.

Ross is charismatic, mysterious, and intriguing. His defiant and dynamic personality should be enough to win any viewer over, but, for the eye-candy-inclined, he is also exceptionally ripped for a period-piece man. I don’t want to make this about his body, because he’s so much more than a body, but it’s worth mentioning that Aidan Turner as Ross Poldark frequently appears shirtless in the series, as he scythes his own fields, works up a sweat, and needs to change clothes and bathe after a long day’s work. Seriously, has there ever been a more drool-worthy, all-around enticing period-drama hero? No, the answer is no. So, go watch Poldark now.