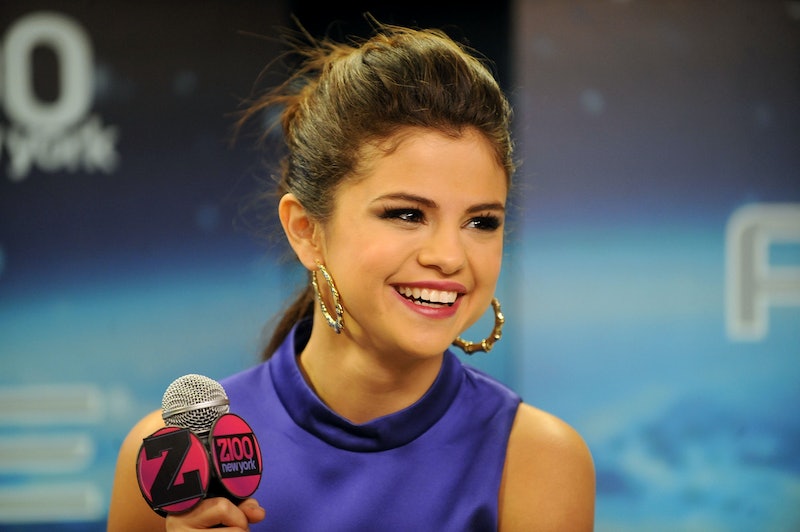 Like a never-ending game of ping-pong, it's hard to keep track of whether Selena Gomez and Justin Bieber are together. There's so much back and forth! They'll break up, reunite, post cryptic Instagrams, delete said Instagrams, and repeat that cycle. Finally I thought Jelena was officially donezo, since Gomez's "The Heart Wants What It Wants" made it pretty clear she knew Biebs was bad news. But in a radio interview on Thursday with NJR Norway, Selena Gomez says she still has "love" for Justin Bieber. Huh? I know, I know. That's clearly different from being in love, but it's still a bit surprising. This came up in conversation when Gomez was asked about writing her latest single (which she's previously admitted is about Bieber). Here's the full quote:

For me, whatever line of work I do, I always have to make sure I'm passionate about it. I definitely have so much respect and love for [Justin]. Going in the studio is very therapeutic, like any other artist... It was my way of having it be a message more to people in general. People everywhere feel this feeling and they should understand when anybody goes through that. They go through something and they just can't help what they want and what they love.

So is that her way of saying Bieber really wasn't that terrible? The part that confuses me is where she says she respects him, and follows it up by saying it's more of a message to "people in general." It's almost like a cop-out from admitting her real feelings. Still, I appreciate that she was trying to convey a universal message and wrote the song in the first place — that takes guts.

Even though she spoke highly about J Biebs, they're not together... at least not for now. When asked if she's dating anyone, the "Come and Get It" singer laughed and said, "No, I'm not actually." Then the interviewer asked if Selena Gomez ever uses Tinder... you know, like us normal folks. Her response? "Oh goodness, no. I don't even know how to work it. I really don't. I definitely don't Tinder." I'm not surprised that she's not on there. But come on, how could she not understand how to use it? You just swipe left and right! If that's too complicated, she can always check out these eHarmony profile recommendations a fellow Bustle writer made for her. Super helpful!

Oh, and another great part of this interview? When she was asked what she thinks about #BlondeBieber. Gomez giggled and refused to give an actual answer. Instead she said, "That's for him. I'll just let him answer all that." Although I wish she said more, it's probably better than her being like, "OMG, I hate it!" While some Beliebers love the look, I personally think he looks foolish. So I'd totally understand if Gomez felt the same way.

To listen to the full interview, check out the audio below!

More like this
Selena Gomez Reacts To TikTok Users Who Say She Shaded Hailey Bieber
By Grace Wehniainen
Selena Gomez Joked About Her Relationship Status In Her ‘SNL’ Monologue
By Grace Wehniainen
Justin Bieber Just Added Another Date To His UK Tour
By Sophie McEvoy
Taylor Swift, Kerry Washington & More Speak Out On Uvalde Mass Shooting
By Jake Viswanath
Get Even More From Bustle — Sign Up For The Newsletter