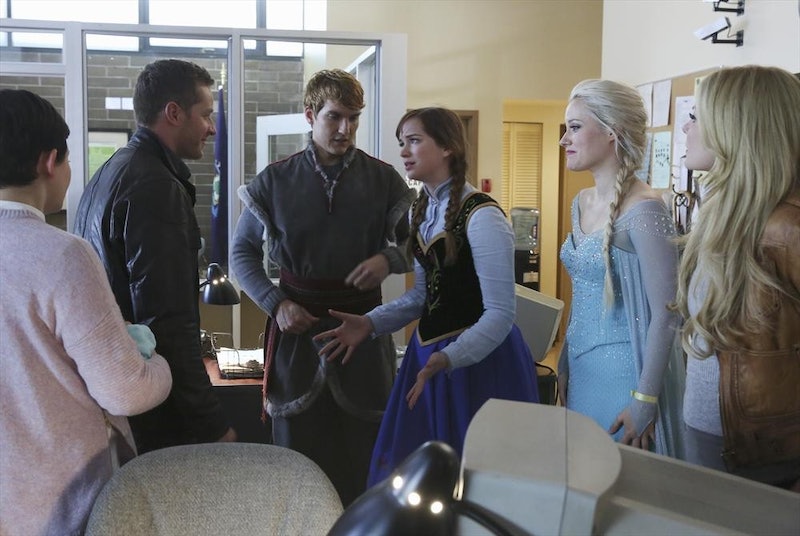 Once upon a time, or three times now, ABC's most enchanting drama has disappeared just before the holidays — leaving fairytale-obsessed audiences everywhere itching for evil curses and magical creatures until spring TV roles around. While the snow is finally melting away on Once Upon a Time, winter is only just starting in our world, which means the annual winter hiatus for Emma and the Storybrooke gang. But when will Once Upon A Time Season 4 return?

Since its inception in 2011, Once Upon a Time has taken an agonizingly long midseason break between December and March and this year looks to be no different. The Futon Critic predicts March 1 as the glorious Sunday that will continue the season, which is introducing epic new villains like Cruella De Vil and Ursula in the midseason finale. But what will happen to the regulars characters? The Frozen arc is bound to leave some open-ended storylines for our favorite Storybrooke residents.

A midseason finale would be nothing without multiple dramatic climaxes, cliffhangers, and in OUAT's case, usually a death or two. But regardless of which characters don't make it to Season 4's next arc, plenty of them will — and most of them will bring loose ends to tie up. When Season 4 returns, these are the likely uncertainties that will need to be covered immediately.

At the moment, Hook's life is on the line, but the relationship isn't completely dependent on his survival. On the one hand, Emma foreshadowed the possibility of Hook's death early in the season when she mentioned that everyone she's ever been with is dead. But that could have been a clever trick to make us think he'll die before season's end. Unfortunately, his survival doesn't necessarily mean his blackmailing Rumple and capturing all the fairies and whatnot won't destroy their relationship.

Before the spell of shattered sight set in, Regina apologized to Henry for putting a standstill on their plans to find the story book's author and promised him they would resume their mission. But why does she still need to find the writer if she has Robin? Assuming this won't be a main plot point in the finale, the season didn't do much to shed light on how that rewritten page landed in Robin Hood's possession. And in the mean time, we have no idea if Marian will live or whether his adultery will have consequences regarding Regina's happy ending.

Belle will never forgive Rumple if she finds out he lied about the dagger, never mind his plan to terrorize anyone who gets in the way of his search for immortality. It's extremely unlikely that either of the two will die in the finale, but I also wouldn't plan on seeing the newlyweds return as happy as they were when Season 4 began.

A Love Interest for Henry

Spoilers from before the season began suggested that a new character named Lily would form some kind of emotional relationship with Henry. However when Lily appeared, she turned out to be a friend from Emma's childhood, who we saw in a flashback. Though it would be much more minor than the series' other couples, I'd selfishly still like to see a new character introduced as a love interest for Henry. He wasn't in these last 11 episodes nearly enough, so it's definitely his turn for a little drama.