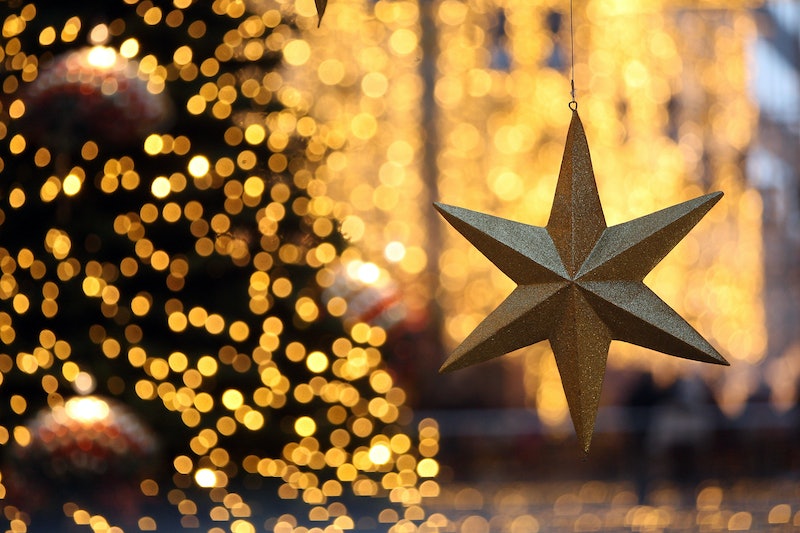 One of my most awkward "Hey, I’m Not A Christian" moments happened when I was in 5th grade. I was at my friend Colleen’s house building a model of one of the miracles of Babylon or something for a history project, and she invited me to stay over for dinner. I was starving and was never one to refuse food, so I gladly accepted the invitation, and we went to go sit at the table, where her dad and brothers were already waiting. Before anything happened, Colleen announced, “Gina is Jewish. She doesn’t believe in Jesus, so we can’t say "Jesus" when we give thanks.” Well, that got awkward quickly.

I never really thought about the culture or religion I affiliated myself with, since I didn’t really purposely affiliate myself with anything. But my friends knew that I was Jewish, at least ethnically and culturally speaking, and while most of the little humans I hung out with didn’t care, others were kind of weird about it. Maybe “hyper-aware” is the better term. Colleen wasn’t trying to ostracize me or make me feel “other”; on the contrary, I think she was trying to “protect” me any Christian vibes that might have made me feel uncomfortable. But the truth was, Christianity never really made me feel uncomfortable unless people pointed out that I wasn’t Christian. I never really felt different, and I still don’t.

I celebrate Hanukkah with my family, and I also celebrate Christmas with my significant other and his family. And I love Christmas! It’s so bright, and pretty, and there are ornamented trees, and minty Starbucks drinks. I have nothing against the holiday, but people will still feel the need to shield me, much like how Colleen once shielded me, from the animal that is Christmas. And it all just feels pretty unnecessary.

When you're a Jewish person dating or married to a goy, here are 11 things that will probably happen when you spend Christmas with their family:

1. Even if you’re non-practicing, your boyfriend or girlfriend’s mom will probably make you something non-pork

You try telling her that you eat pork, but she just says, "nonsense," hanging you a plate of specially made turkey or Tofurkey. Hey, you're not complaining. Ham is kind of gross, anyway.

2. For dessert, his grandma will let you know that Dreidel-shaped cookies are in the fridge and not to worry

Concerned that the green and red Christmas cookies might offend you, someone will probably buy blue-and-white frosted Hanukkah cookies from the grocery store, or even try to make something Jew-y, like apricot rugelach in order to make you feel like you fit in. But you guys: frosting is frosting, and butter is butter. Don't overthink these things. If it is sugary, we will eat it.

3. Once his little niece and nephew find out you’re Jewish, they will most likely ask, “So you don’t believe in Christmas?”

And it will be adorable, and you will have to come up with some kind of euphemistic way to say, "Nah, not really. But I totally dig it, my little babies!"

4. Her aunt will put your present under the tree, but wrap it in blue and white, Star of David bedazzled wrapping paper

Just so that you know she knows that you're Jewish. And it's a super sweet gesture, but just FYI: wrapping paper is kosher, no matter what color it is, or the type of design it has on it.

5. You’ll be asked if you’ve ever seen It’s a Wonderful Life

I mean, I haven't seen it, but that's not because I'm Jewish. It's because that movie is freaking boring and there are so many other movies I would rather watch instead.

6. They’ll probably explain every single tradition to you

"So on Christmas, sometimes we wear these thin, pastel paper crowns while we eat dessert," or, "On Christmas day, the family likes to go out to see a movie. Does your family have Hanukkah traditions?" are things you will probably have to hear. Just go with it.

7. Including why in god’s name we all still eat rum raisin cake

OK, but really: Why do you guys eat rum raisin cake when we all know it tastes like dry pastries baked by drunken pirates?

8. Someone will ask if you believe in Jesus

Every. Single. Year. Usually, this will come from a grandparent or a younger sibling who has no real concept of religion, nor social decency.

9. They will exercise great caution when saying a prayer before Christmas dinner

And this prayer will be as diplomatic as possible. "God" won't even be uttered, just in case you misinterpret the kind of God they're referring to.

10. Or they will ask if it’s okay with you for everyone to thank Jesus before the meal

And what are you going to say? "Actually, no. Can we thank Satan instead? Because I really do believe credit is due where credit is due." As long as I still get to eat when you're done talking, you can thank the easter bunny for all I care.

11. They’ll probably ask if it would offend you to listen to Christmas carols

And you will say, "No, not at all," because Christmas carols aren't offensive, they're just annoying. But ultimately, Christmas carols or not, you will be happy to spend the holiday with the person you love and the people they love because it's warm, cozy, and feeling very loved is really all this season is about anyway.