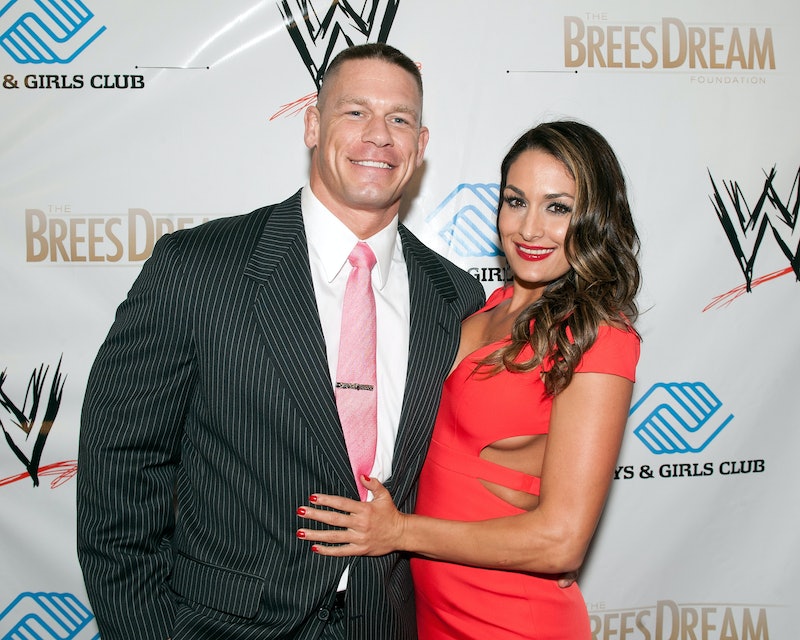 It's somewhat surprising, but also totally understandable, that so many of the plotlines on Total Divas — the reality series that follows the personal lives of WWE Divas — would revolve around marriage. After all, most of the cast members are women in their thirties, meeting potential mates at work and in overlapping social circles, trying to balance their personal lives with their careers. Sure, their relationships involve a lot more "tackle time" than many of ours, but this crew has run the gamut of love: dating, break-ups, puppy love, true love, marriage, engagements, broken engagements, and the couple that has run through (or at least considered running through) almost every single one of those pitstops just within their own relationship is Nikki Bella and John Cena.

In the first half of Season 3, Bella and Cena were like two (very muscular) kids in love, dealing with very adult relationship complications. Cena knew that he wasn't looking for marriage or kids in his future, but Bella didn't feel like those were decisions she was ready to make, or more likely, knew she'd feel differently if she made herself think about it. Though the couple handled the subject with maturity and flexibility, it only took a little bit of family medling (of the "Brie Mode" variety) to flip the script in the most dramatic of midseason cliffhanger conversations. Let's catch up on where they left the marriage question in the midseason finale, and where we might be finding the WWE power couple when Total Divas returns on Jan. 4.

Any way you look at it, Bella and Cena have had a rocky relationship. I've always assumed he's kind of a softy, and she seems pretty level-headed (when not lying about secret former marriages or, y'know, wrestling someone to the ground), but they've seen their fair share of drama and come out on the other side. In the first half of Season 3, dramatic romantic gestures and past secret reveals slowly turned into calm conversations about their future, namely, marriage: will they or won't they?

Cena has always said that he's not good for Nikki, and now it seems more clear why he thinks that... he doesn't want to make her sacrifice the two things that clearly mean so much to her: marriage and children. And that is where we left Bella and Cena, with him telling her, “If you love something, you let it go, I guess." But, y'all... I don't think he's going to let her go. Or rather, that she wants to be let go. Yes, they have some fundamental differences, but they both seem to be willing to work on them and, rather than make these grandiose sacrifices for each other, come up with a future that they can both look forward to. One that is, most importantly, spent together. Plus, they certainly don't seem to be broken up in the Season 3 interim.

Nikki's sister, Brie Bella, was the cause for Cena's midseason finale sacrificial change of heart, and the fallout of basically causing her sister's boyfriend to try and break up with her is bound to show up in the new season. Hopefully everybody can keep their scissor-kicks to themselves. Even with three months to get over it after filming, something tells me Nikki wouldn't be so quick to be best pals with Brie again if she had really caused a breakup with Cena. Brie's head still on and lipstick still on point? Then Nikki and Cena are probably still together.

But if they're still together... did this drama actually accomplish anything? Will there be wedding bells for a second Bella this season, or will Cena successfully White Fang her? The promos look like Bella is still fighting for the relationship, and Cena's Twitter reads like a teenager in love.

The latter half of Season 3 looks to be about Cena and Bella making compromises with each other to come up with a future they can both be happy with, and I really hope they can find one. Good luck, you two.