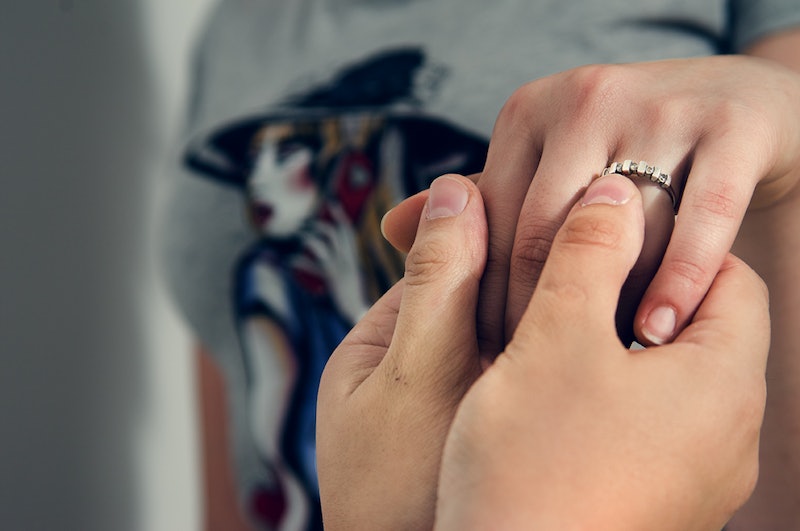 To all the guys out there planning huge wedding proposals, you’re going to have to up the ante from a boring old flash mob or some lame $80,000 iPhone proposal. That’s because British man Jim MacAuley just casually got a bunch of famous people to record a proposal video saying why his then-girlfriend, Sophie Hancock, should marry him. I'll let you take a wild guess on if she accepted or not.

The video, which features Ed Sheeran, Cee Lo Green, and Natalie, the cute assistant who falls in love with Hugh Grant in Love Actually (real name Martine McCutcheon), took four years to make. Which is really saying something considering they were together before 12 years before the engagement. 12 years! Talk about commitment. Maybe there is hope for us all.

However, this star-studded video proposal strategy probably wouldn’t work for most of us, MacAuley told The Mirror . Since he works as a musician (a “session drummer,” whatever that means, to be exact), he’s made connections with these celebs before and he wasn’t a complete rando to them. He said, “It took four years because you can’t just go up to people and ask them, you have to meet them and establish you aren’t an idiot.” So your plan to tweet at Kanye every day until he helps out with your proposal? Yeah, not gonna work.

For those of us who don’t have cool jobs where we get to hang out with Ed Sheeran, we will just have to live vicariously through this video, which you can check out below.

I’m just glad this worked out, because imagine if it had gone the other way? Like, if I didn’t want to marry a guy, a bunch of celebrities wouldn’t convince me otherwise, even if Shemar Moore was one of the aforementioned celebrities. How sad would that have been if it was all a waste?

Thankfully, making the video was time well spent since she said yes. This has served as your friendly reminder to always make sure you know the answer before you plan a super elaborate proposal!

More like this
The “Teenage Dirtbag” Trend Is TikTok's Latest Nostalgic Obsession
By Meguire Hennes
How To Use The Whatnot App To Thrift Vintage Items
By Emma Carey
12 Cheeky Instagram Captions To Use When You Haven’t Posted In Weeks
By Emma Carey
25 Things I've Reduced My Life To, In Addition To WFH In My PJs
By Ginny Hogan
Get Even More From Bustle — Sign Up For The Newsletter