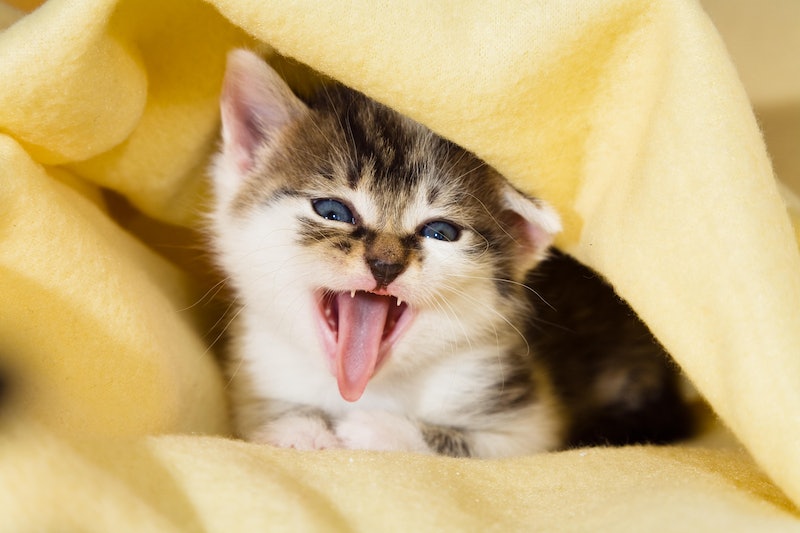 The holidays are winding down, which means that by now, various and sundry relatives you see once a year have had ample opportunity to make you feel terrible about how incredibly single you are. Even if it's by choice, somehow there's always that one relative who's perfected the art of showing their disdain for your love life by inquiring about your sibling's flawless relationship, then pointedly asking you how your search for a life partner is going. Despite Beyoncé's best efforts, it's still hard out there for a single lady.

But you know what? I say it's time we take a stand against this hostility toward single women. We may not have significant others, but we do have people who love us. Parents, siblings, friends, teachers, and, most importantly, our cats. People say you can't buy love, but actually, you can walk into the nearest animal shelter and adopt a pretty good approximation. (By the way, I'm just going to leave this link to an animal shelter locator here...)

In fact, in my opinion, cats are better than a boyfriend or girlfriend. Why, you ask? Well, I just happen to have an extensive list right here. Fancy that.

Animal therapy has been shown to reduce anxiety in college students. You know what happens to be used in animal therapy? Cats. Can you say the same about your last significant other? Probably not. In fact, he or she probably had the opposite effect, because breakups are more stressful for women.

Nobody likes stubble burn, but if you had a boyfriend a few months ago, you probably had to deal with it while he grew a beard in celebration of No Shave November. Cats, on the other hand, can and will rub all over you without leaving a trace. Except all the fur.

3. They're better at sharing the bed.

In relative terms, that is. Having a partner in bed at all can ruin your sleep, even if that partner is a pet. But wouldn't you rather be woken up by a purring ball of fuzz than your significant other snoring loud enough to be heard through earplugs?

4. You can tell them everything and they won't judge.

Because they don't have any idea what you're saying, unless it sounds like their name. It's very therapeutic.

5. It's socially acceptable to have more than one.

Polyamory is still frowned upon by most Americans, even if they do have a pretty sweet apartment community in New York, but it takes a lot of cat adoptions before you start to raise eyebrows. Maybe don't try to test this, by the way; do you really want to scoop the litter boxes of 15 cats?

6. If they leave, it's because there's better food somewhere else.

Your ex might have left because he fell out of love, or she cheated on you, or they might have peaced out without an explanation at all. But if a cat doesn't come home, you can assume either something happened (which I'd rather not contemplate), or someone started feeding them better food. Cat food is a much better excuse for leaving than "finding someone else."

7. They don't care what you feed them.

Only a total jerk would expect you to cook for him, and if he does, you should probably dump him. But there's still the underlying expectation that you should feed your significant other something other than takeout every once in a while, whereas cats don't care if you give them bits of egg that fell on the floor while you were cooking them. They're just excited you're flicking bits of food at them at all. That said, if someone is flicking them better bites of food then see number six.

In fact, you have no idea who their (probably adorable) parents are. Alternatively, you actually live with one of their parents too, and you love them all equally.

Instead of dousing themselves in Adam Levine's newest fragrance instead of showering after they work out, cats obsessively clean themselves all the time. Plus, there's the added bonus of watching them contort into weird positions to get hard-to-reach places.

Bet your last boyfriend couldn't do that. Unless he was a vampire, in which case you have better things to be researching than a list of why I love cats.

11. Their purring has magical powers.

You might have noticed your cat purrs when he or she is freaked out, as well as when they're happy. Turns out, it's because the frequency of their purring is associated with improved healing of muscle and bone.

12. They provide endless hours of entertainment.

Once you get your hands on some catnip or a laser pointer, you can entertain yourself for hours just by watching them go crazy.

13. They don't try to make you socialize.

Your ex was always saying, "You can't watch Parks and Recreation for six hours straight! You have to leave the apartment!" Your cat, on the other hand, is just as interested in the TV as you are. You can tell because they keep batting at the screen.

Now that I think about it, why do we even have significant others? Cats are just as awesome, with the addition of fluff and the potential for kittens. Next year, try taking your cat to family gatherings. People will be so distracted by their cuteness, or worried about your mental health, that your aunt Bertha won't even think to ask about your love life. Even if she does, just say you're saving yourself for Tom Hiddleston.