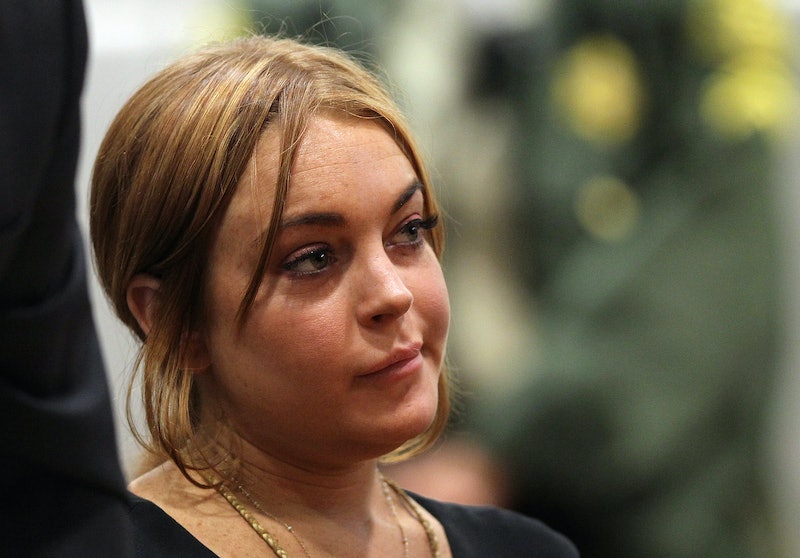 Do you think Oprah intervened? I totally think Oprah intervened. After only a few weeks of dating, Lindsay Lohan and boyfriend Matt Nordgren have broken up. While neither really confirmed their relationship in the first place, there are reports now that the two have ceased their romance and have gone back to being buddies without benefits.

Rumors surfaced that Lindsay and Matt were an item when they were spotted looking lovey-dovey at a club. He spoke to Page Six about how he's known Lindsay for seven years and how they're great friends, and wham: we slapped a label on them faster than you can say, "No, that's not my coke, officer."

And as fast as we called them boyfriend/girlfriend, it's allegedly over. A source told Perez Hilton:

Their work schedules and the distance just make dating impossible. He really likes and respects her. He thinks she is back on top, emotionally and physically. He respects her sobriety and wishes her the absolute best. They will remain good friends.

The phrase "work schedule" is throwing me here, but I'll allow it. I'm sure Lindsay is very busy working to keep her mother out of jail and Nordgren's probably working on getting back together with Hills star Audrina Patridge or his ex Vienna Guardi who starred on the Bachelor.

And let's not forget, Lindsay is also working with Oprah on that docu-series about her life. I'm sure Opes didn't look to kindly on this distraction called Nordgren in Lindsay's life... and hey, if Oprah talked Lindsay out of going on a trip to Europe, pretty sure she can talk Lindsay out of just about anything. Sucks to be Nordgren.

More like this
Laura Tott From 'First Dates' Married Her Long-Term Mystery Boyfriend
By Darshita Goyal
Nicola Walker’s IRL Husband Is No Stranger To TV Screens
By Darshita Goyal
Leona Lewis & Husband Dennis Jauch Welcomed Their First Child
By Darshita Goyal
Who Is Camila Cabello Dating? She's Getting Cozy With Lox Club CEO Austin Kevitch
By Radhika Menon
Get Even More From Bustle — Sign Up For The Newsletter