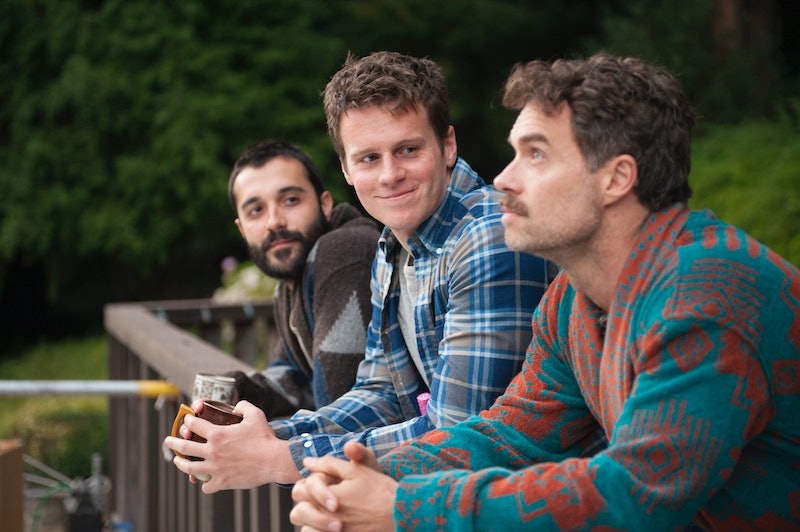 Even before Looking premiered its first season on HBO back in January of 2014, people had already started referring to the show about three gay friends living and loving in San Francisco as "the new Queer As Folk" or "the gay Girls ." (Or, alternately to the latter, "the gay Sex And The City.") While it certainly must be taken as a compliment to be compared to such well-regarded shows, it can also be stifling to have your identity so wrapped up in what came before. Fortunately, Looking quickly distinguished itself from the pack with its slow-burn pace, its focus on characters over plot, and its quietly dry sense of humor.

And yet the comparisons persist, even as Looking premieres Season 2. Is that flattering or frustrating? "I think it's both simultaneously," said star Frankie J. Álvarez (Agustín), when I spoke to him about the new season.

"It’s flattering to be compared to [Showtime's] Queer As Folk, which certainly was a game-changer within the community, and for cable television. We wouldn’t be here if it wasn’t for a show like that," he says. "And being compared to Girls and Sex And The City, marquee HBO shows that are well-loved and respected, with brilliant casts… Sure! But I think it’s a thing in the industry where we have to talk about something new in relation to something old. So it's just something we've gotten used to."

To hear Álvarez tell it, all the shows people tend to lump together aren't even all that similar. "When you group Sex And The City, Girls, Queer As Folk, and Looking all together, the Venn diagram where it all comes together is: a group of friends dealing with romance and careers. But the comparison stops there. They’re all so different and unique in their own special way."

One thing that certainly separates Looking from the female-driven HBO comedies viewers compare it to is the responsibility that's thrust upon it to speak for a wide group of underrepresented people. While Sex And The City and Girls are fairly specific in their demographics (working women in big cities in the late '90s-early '00s; middle class hipsters living in Brooklyn), audiences often look to Looking to represent "the gay community" — since it's pretty much the only scripted program on a major network that revolves exclusively around gay protagonists.

This is probably a futile task, since "the gay community" isn't a solid block of homogenous people; it's as full of diversity as the non-gay community. This is a frustration that Álvarez, who's of Cuban descent, is familiar with: "It’s the same when talking about 'the Spanish community.' Ecuadorians are very different from Puerto Ricans and different from Cubans, you know? It’s tough to get lumped in together," the actor says. "Unfortunately, it’s something we’ve done as humans: we like to categorize, and we always have, and we probably always will. But we can be conscious of it and get better," he hopes.

So how do the actors and writers of Looking reconcile that impossible responsibility with the demands of simply trying to craft an entertaining TV show? By focusing on the characters, according to Álvarez. "Andrew [Haigh], our showrunner, he’s very conscious about this show being about relationships. It’s not an issue-based show. Every time we’re dealing with an issue, it’s through the lens of these relationships and the circumstances that these characters are dealing with. I think that’s really where the heart of the show lies. We’re not getting on a soap box. That’s what separates our show from a show like Glee." With one caveat, at least: "Jonathan [Groff, who has guest starred on FOX's musical show as the pompous Jesse St. James,] is singing on set all the time, so sometimes it starts to feel like Glee."

But while Álvarez knows it's impossible for Looking to capture the entire gay community in one series, he's optimistic that the show can open doors for more depictions of LGBT life on the small screen: "Hopefully we’re paving the way for more diverse gay characters and more twists in storytelling so that the tone of gay television is as diverse and vast as it is for straight television. And hopefully we can defy categorization one day."

In Álvarez's experience, Looking has already started breaking down those boxes people put each other in. "I went to an all-boys Jesuit school from 6-12th grade in Miami," he tells me, "so now I have a lot of Republican lawyer friends in Miami who are buddies of mine. They watched the show, and they were pleasantly surprised to see, 'It’s not my point of view, it’s not how I live my life, but I can see myself in these guys. I can see myself in that relationship. I totally relate to that circumstance.' That’s the boundary that we’re breaking. Hopefully that categorization can go away and we can start to see ourselves in each other."