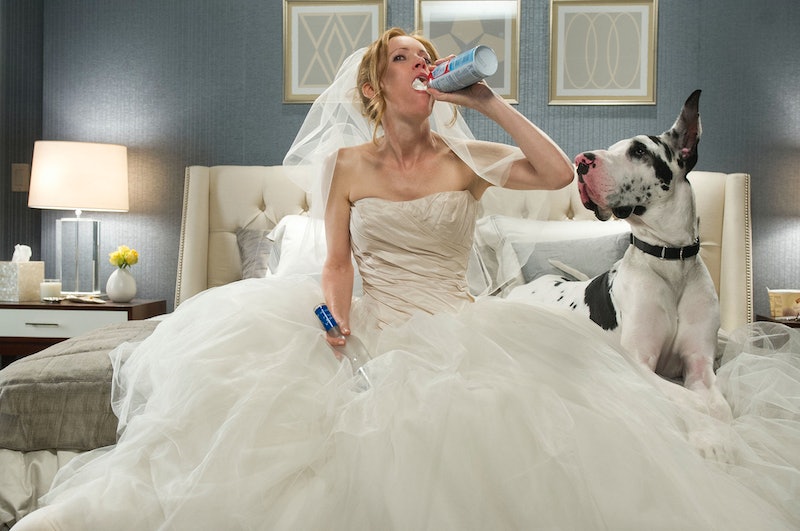 We’re always hearing that we could be having better sex, a better orgasm, or a better relationship . But how often do we actually hear the nitty-gritty details of how we might actually achieve those things? Bustle has enlisted Vanessa Marin, a licensed sex psychotherapist based in San Francisco, to help us out with the specifics. This week’s topic: how to stop obsessing about the other woman after he cheats.

Q: My boyfriend and I have been together for four years. Three months ago, I discovered that he had been cheating on me with one of his exes. I confronted him about it, and he was very apologetic. He says he’s still in love with me, and knows he made a huge mistake. He wants to make it work between us. I couldn’t bear the thought of losing him, so I stayed.

My problem is that I can’t stop myself from obsessively thinking about him and his ex having sex. It has gotten to the point where I can’t enjoy myself when we have sex. I get self-conscious wondering if she was better in bed than me. Did she look better naked than me? Did she turn him on more than I do? I actually asked him once if she was good in bed, but he refused to answer.

A: I’m so sorry that you’re having to deal with the lasting effects of infidelity in your relationship. There’s no easy way around it — being cheated on sucks. It takes a long time to bounce back from it.

Right now, it’s almost as if you’re being a little masochistic about the pain you’re in. You’ve been hurt so badly by his actions, but now you’re hurting yourself even further with this harmful train of thought. Let’s walk through some steps for getting yourself to stop making your situation worse.

Don’t Ask Questions You Don’t Want The Answers To

First things first — don’t ever ask him to tell you how good she was in bed again. I sympathize with the fact that your imagination is running to wild and painful places, but you’re only going to cause more pain by trying to wrangle an answer out of him.

He refused to answer the first time, and I’m sure he was upset to be put in that position. Asking again will only make it worse. You’re also asking him to think about her, specifically, to think about her performance in bed. Do you really want to encourage him to do that? And finally, there’s not going to be a satisfying answer to your question. If he says she was better, you’ll be devastated. If he says you’re better, you probably won’t believe him, and it will only further damage your trust in him.

Realize That This Is a Protective Mechanism

It’s likely that you’re so obsessed over the specific details of the two of them in bed because your brain is trying to regain control. It wants to understand why this happened to you. Your brain craves a rational explanation, because a rational explanation would help you avoid feeling this sort of pain in the future. Unfortunately, this is a complex situation, and there isn’t an easy, straight-forward answer.

I know this is SO much easier said than done, but it’s still important for me to tell you not to compare yourself to her. People cheat for very complex reasons, and it’s not always just about the sex. You’re never going to know the exact details of why he made the decision he made, so there’s no use driving yourself crazy with comparisons.

He made a very bad, very painful mistake, but in the end, he also chose to be with you. It doesn’t matter if she’s cooler than you, richer than you, prettier than you, skinnier than you, more fun than you, or smarter than you. He wants you.

Acknowledge Your Fears, But Don’t Let Them Control You

Even with your best intentions, you’re not going to be able to completely prevent yourself from thinking about her or the two of them together. First, give yourself some validation for having the feelings you’re having. Say to yourself, “I got cheated on, and it was devastating. It makes sense that I’m in so much pain.”

Next, develop strategies for how to manage your feelings as they come up. How have you handled difficult feelings or negative thoughts in the past? Some simple techniques to try include taking slow, deep breaths, counting to ten, or visualizing flicking her away like a bug.

This is especially important when it comes to sex. If you start thinking about the two of them while you’re being intimate with your boyfriend, try acknowledging your thoughts, then redirecting your attention. Say something like this to yourself, “I know I’m thinking about the two of them again, but I want to focus on staying connected to my man.” Look him in the eyes as you think this. It may take a few tries, but it will eventually help you feel more present.

Three months isn’t an awful lot of time, so it’s natural that you’re still having a lot of feelings about this betrayal. Try to keep reminding yourself that it will get better as time goes on. You can try breathing a little life into your relationship by doing new activities together or developing a special ritual just between the two of you.

It also might help to focus on yourself for a little while. Your self-esteem took a blow, so your confidence probably feels a little shaky right now. Try to make an active effort to take good care of yourself and improve your self-esteem. What are the times that you tend to feel the best about yourself? Do you feel grounded and powerful when you’re in your kickboxing class? Do you enjoy pampering yourself with long baths or at-home pedicures? Do whatever you can do to help you start feeling more like yourself again.

I know it’s painful, but you may want to consider whether you’re truly capable of staying in this relationship. Things will get better with time, but you’re never going to be able to go back in time and undo what happened. Some relationships can survive infidelity, but many can’t. It’s a hard choice to make, but I would try to think seriously and honestly about your future with him. Being afraid of losing someone is not the same as actively choosing to be with someone.

More like this
This Company Will Send STI Tests Right To Your Door
By Lexi Inks
14 Underrated Date Ideas To Try With Your Partner
By Lexi Inks
Bumble's "Compliments" Feature Lets You Message Before You Match
By Lexi Inks
Dyson Is Dropping Futuristic, Air-Purifying Headphones
By Rachel Lapidos
Get Even More From Bustle — Sign Up For The Newsletter