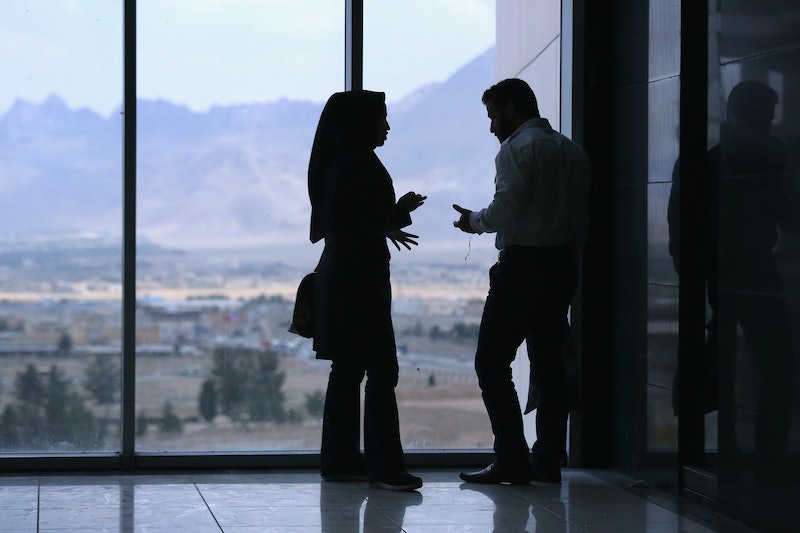 We’re always hearing that we could be having better sex, a better orgasm, or a better relationship. But how often do we hear the nitty-gritty of how we can actually better understand our deepest desires and most embarrassing questions? Bustle has enlisted Vanessa Marin, a licensed sex psychotherapist based in San Francisco, to help us out with the details. No gender, sexual orientation, or question is off limits, and all questions remain anonymous. Now, onto this week’s topic: What to do when someone cheats on you — and you don't want to break up?

Q: I've been with my boyfriend for 4 years. A few months ago, we got into a big fight and he went out with his some friends from college. He got drunk, and he made out with another girl. He told me right after, and said nothing else happened. I understand how people cheat — it's not like I've never been tempted myself — but I can't seem to trust him now. I don't want to break up. How do we rebuild the trust?

A: First of all, I’m so sorry to hear about the situation you find yourself in. Cheating is shockingly common — some studies say infidelity will occur in 40 percent of all relationships. Unfortunately, the frequency with which it happens doesn’t make the experience of being cheated on hurt any less. Here's how to start dealing.

Ask yourself: WHAT DO YOU WANT?

You say you want to stay together, but I think the first step is to really decide for yourself whether you want to put the effort into rebuilding your relationship with your boyfriend. You may be scared by the prospect of a break-up after such a long time together, but that shouldn’t be the motivating factor in your decision.

Ask yourself honestly — can you see yourself eventually fully forgiving him? Can you imagine trusting him again? You can't anticipate exactly what will happen in the future, but you should have the sense that you’re capable of moving forward.

Sometimes it can be useful to give yourself a short break from your partner to figure things out and process your feelings on your own. Being cheated on is a horribly painful experience, and it’s important to give yourself some time to breathe before jumping into “where do we go from here?” Even a couple of days without contact can be beneficial.

If you decide that you do want to work things out with your guy, you’re going to need to really talk about what happened and why. What was he feeling when he stormed away after your fight? Was he trying to get back at you by hooking up with someone else? How did he feel after it happened? I know this step might feel excruciatingly painful, but it’s important for you to hear him out.

Your boyfriend needs to hear what you have to say too. He has to understand how his actions hurt you, and has to be willing to give your emotions some time and space. There are probably going to be some painful moments in your future, and he can’t run away from conflict like he did when he cheated.

That being said, the fact that he cheated doesn’t give you the right to beat him up endlessly or bring his infidelity out as your trump card every time you get into another argument. You have to be willing to let it go if you want to move on.

You may want to consider couples therapy to help the two of you process what happened. Trying to be respectful and follow the rules of communication when you’ve been betrayed can be really tricky. Having a trained third party in the room can help you share your feelings more productively.

The most important thing to know after you make the decision to move forward is that that things are going to be shaky for awhile. You’re probably going to feel insecure and wary. He’s going to be wracked with guilt. There are going to be fights and tears.

Many of the couples who come in to see me after infidelity has occurred are looking for a quick way to get back to where they were before the cheating happened. Unfortunately, there is no magic eraser or fast-forward button. Rebuilding trust takes time, and there's not much you can do to speed up the process.

Try to rebuild trust in the same way that you built it originally. What sorts of activities made you feel close with each other? How did you allow yourself to be vulnerable with him? What were the ways he showed you his trustworthiness?

You may also find it useful to set some ground rules in place while you two are working on repairing your relationship. For example, asking him not to see that girl again or to go to couples therapy. Don’t make too many restrictions though — the fact that he cheated doesn’t give you a license to control his life. Trying to banish him from hanging out with friends or going out drinking will only lead to more tension.

don't try to make things 'how they used to be'

Sometimes, I like to frame rebuilding trust as creating a new kind of trust. Your relationship is not going to be the same as it was before the cheating happened. Think about this process as working towards something different together, rather than hoping things will return to exactly the way they were before he cheated.

When I work with my clients, I help them identify the triggers to their behaviors and come up with healthier responses. In your situation, it sounds like your boyfriend made out with another girl as a way to manage his feelings from your argument. He got upset and couldn’t contain his feelings, so he acted out.

There’s an opportunity here for the two of you to improve the way you handle conflict. You’re probably going to fight again in the future, so you want to figure out how to fight better. What made your boyfriend so upset about your fight? Were either of you fighting unfairly? Take the time to figure it out.

Open yourself up to the positive possibilities

Infidelity is very difficult to move past, but it’s not impossible. Think about the four years of history you and your boyfriend have together. I assume that there have been plenty of times where he has been a supportive and trustworthy partner. He made a big mistake, but it was one bad decision out of years of good ones.

Some couples even find that working through infidelity brings them closer together. The thought of losing each other over a few minutes of indiscretion can make you realize just how deeply you care about and love each other. It shouldn’t take an act of infidelity to remind you how much you want to be with your partner, but sometimes it does work out that way.

And remember: As you move through this process, what matters most is that you simply listen to your gut. If you remember to be kind, honest, and patient with yourself, you'll know when you're doing the right thing.