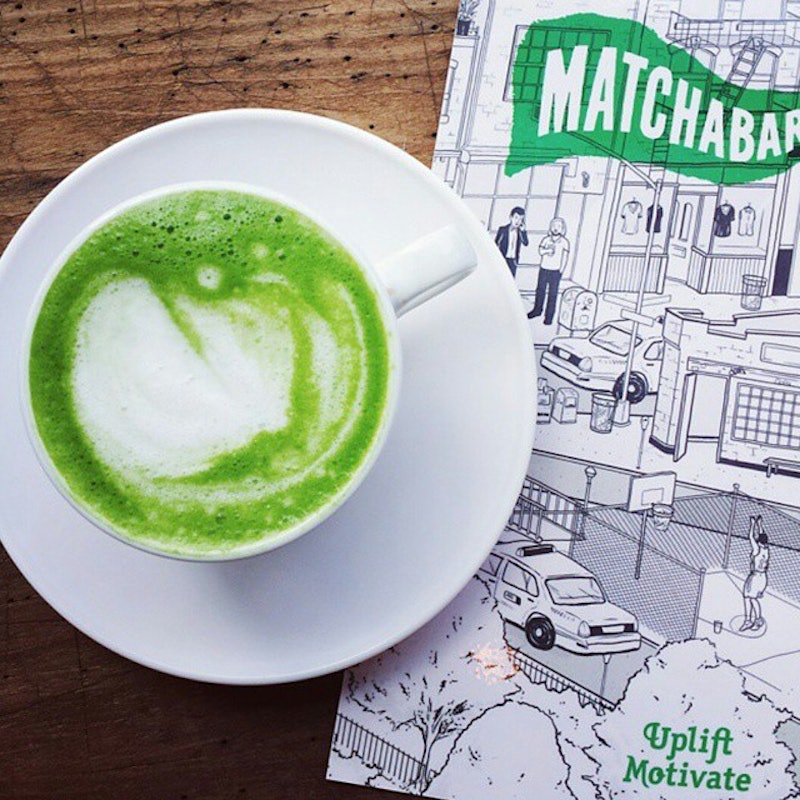 It's a new year, and you know what that means: Vogue has released its Foods Of 2015, a list of all the achingly on-trend things we'll be noshing on all the way to New Year's Eve (when, presumably, we'll toss them aside for the Foods Of 2016). If you, unlike me, don't treat this hallowed event with a mixture of amusement and confusion, let me explain why it's both awesome and weirdly enlightening as to the modern condition.

If the idea of nourishment in any form seems like the fashion industry's worst nightmare to you, you couldn't be more wrong: food has more trends, fads and (literal) flashes in the pan than a Forever 21. As we've developed the technology to ship in out-of-season crops from anywhere in the world, seasonality has been replaced by a year-round appetite. But the trends aren't just driven by availability: as you'll see, Vogue's picks — which have been scientifically determined by how many achingly cool Williamsburg joints have opened devoted to them — are a mix of the down-home nostalgic and the pretentiously exotic. Our food now needs to be everything, from charmingly reminiscent of Leave It To Beaver America to weirder and edgier than an FKA Twigs video.

Food trends aren't really about taste or "mouth feel." They're about the eater: proving that they're culturally sophisticated and worldly (matcha tea), outré and willing to push boundaries (bone broth), committed to health (rainbow chard), and really just a simple local kid at heart (fried chicken and grits).

However, it would be at least useful if they were also tasty, so I'm biting the bullet: I decided to taste every single one of them. And there was only one outbreak of nausea.

What Vogue says: "If the lines at Snowdays, the new hybrid ice cream–shaved ice spot in the East Village, are any indication, the shaved-ice takeover is well underway."

What I say: For one, it's January, so I don't know who's queuing up in the East Village except homesick Alaskans. But I have committed, so I went to my local ice cream place, a very tolerant joint that makes Dr. Who puns about their flavor types, and asked them if they'd heard of it.

They hadn't, and had no idea where I could get some. With a little research, however, I found Nice Ice in London, the first shaved ice place in the UK. And the results are completely freezing but pretty good, with sharp crisp flavors — and far less creamy and unguent than ice cream.

What Vogue says: "In case you hadn’t noticed, eggs are no longer relegated to the breakfast section of the menu. Our motto for 2015? Put an egg on it."

What I say: As usual, Vogue demonstrates that it lives on a far thinner, less tasty planet than the rest of us. I have been putting an egg on it for years (though not, in the style of one schoolfriend from Hong Kong, frying it and putting it on top of Spam, which I maintain is disgusting).

Eggs in everything will do me nicely — my parents have a hard-boiled egg slicer that can cut them in five ways , so devoted are we to this idea. In this case, I opted for free-range eggs from the local supermarket, fried them, and had them on toast for dinner. Delicious. Good work, Vogue.

What I say: Look, I am a woman who enjoys her decadence. Agent Provocateur and fillet steak would be my Tuesdays, if I had the budget. But at $38 for a measly 30 grams of this wonder tea, we've gone beyond Mariah Carey levels of Are-You-Kidding-Me. We are officially at level Really-Bitch.

Of course, it claims to be worth the fiscal pain. Matcha, a powdered gyokuro green tea prepared in a seriously labor-intensive way (hence the price tag), is a health bonanza: it has seven times the antioxidants of dark chocolate, and one study discovered that exercising after drinking it might burn 25 percent more fat. It's essentially Superman in tiny tea form.

Preparing it is also a pain in the ass: as befits a Highly Expensive Thing, only a tiny amount is necessary, but it needs to be added to water at precisely the right temperature and whisked to a precise consistency. It also tastes like a punch in the head. I had expected at least an orgasm from the experience. Nonplussed.

What Vogue says: "Kale is the Beyoncé of leafy greens: beloved by all. But with some food providers predicting shortages of the crop in the future, it’s rainbow Swiss chard’s opportunity to shine."

What I say: There's going to be a kale shortage? That's amazing. But Swiss chard is the focus here. And it's — well, it's leafy, and green, and Good For You, and only got me a small eye-roll from a supermarket attendant when I said I was looking for it. That is the mark of a niche vegetable that's gaining mainstream acceptance.

The rainbow version isn't actually all that different from the other varieties. I suspect Vogue was succumbing to aesthetic lust, here. But, faithfully, I found some, and did what I normally do with leafy vegetables: cover them in butter and steam till they wither. Possibly I negated the healthful effects, but it was crisp and vivid and delicious, with a lovely crunch. (Note: rainbow chard's also called "bright lights," which is adorable, and I hope Anna Wintour is drawling it at her assistant right now.)

What I say: My husband's been trying to make bone broth at least since we first met, not because we're hugely cool and ahead of the game, but because he learned to cook in Italy, and bone broth is basically the sine qua non of Italian food. We start out with great intentions, but the pot generally boils dry (doing it properly requires something like six hours), or something singes, or we're required to leave the house and the risk of fire seems too great, so it's only rarely gotten off the ground.

But when it does — and when you take a sip of it, rather than doing what one normally did before this craze hit, which was put it away for use as a base for something fancier — it's pretty damn good. It's particularly great, like us, you have approximately zero money whatsoever.

What I say: Nothing will convince me that this isn't Vogue's paltry attempt to convince us that their staffers do, indeed, eat fried food. But I can't fault their taste. My selection for this experiment is a local burger-and-fried-food hipster joint, complete with pool table, cartoons on the walls, and vintage menu fonts.

The results are, as we all know perfectly well without me telling you, delicious. Fried chicken is a Southern classic, but it's also, as Vogue does point out, massive in Korea, where they make it intensely spicy. I am perfectly happy with any food trend that leaves me greasy-lipped, cheerful, and stealing other peoples' napkins to wipe off the stickiness. 10/10.

What Vogue says: "Who is responsible for the budding crawfish craze? The critters are popping in everything from the mac and cheese at Heavy Woods to the dumplings at Mooncake Foods."

What I say: What we have here is one of those interesting cross-cultural culinary translation problems. I had no idea what a crawfish was, but I was fairly sure I'd eaten one, purely because Australia, England, and the U.S. all seem to call the same rough sort of crustacean wildly different things.

And I was right: in Australia, crawfish are called crayfish or yabbies, the latter of which I fished out of a dam in remote central New South Wales as a child. I'd maybe recommend something safer than hauling them out of a probably-polluted hole in the ground? Maybe.

Either way, they're tasty little suckers, but there's not much meat on them.

What Vogue says: "Seltzer makers are the new juicers."

What I say: I am part of the percentage of the population for whom carbonated drinks are the enemy. The carbon dioxide in carbonation triggers pain receptors, and I feel that pain, badly. I'm not alone in this — basically every animal aside from humans hates carbonated water, and it's theorized that we only adapted to like it because it helps us detect spoilt food — but seltzer and I? Not friends.

Seltzer, in the United Kingdom, is called soda water, and we had some in the cupboard, left over from a party. I poured a glass, for Science. Result? As expected: disgusting, painful fizz, immediate sour taste, and a feverish expulsion into the sink. Do not pass GO, do not collect $200.

What Vogue says: "New York City got its first ever mustard sommelier in 2014 at the Upper West Side home of French brand Maille, which has mustard on tap as though it were a craft beer."

What I say: One, that is the most hilariously pretentious thing I have ever read. Two, mustard is a genius invention and one I deeply love, particularly in its true element: spread on meat.

Making mustard is actually surprisingly easy; you can even concoct it using mustard seeds and beer, which may genuinely be my Christmas present to my family this year. However, for this section I went lo-fi: a roast beef sandwich with mustard and rocket. (I'm pleased by how much of Vogue's food can be consumed with carbs.) I may have had a small coughing fit, but we'll attribute that to my over-enthusiasm in slathering the mustard on everything, including my nose.

What Vogue says: "Quinoa got a big boost from the gluten-free bonanza of the past few years, but corn-based grits are just as safe for people with celiac disease — and much more flavorful. In other words: Kiss my grits!"

What I say: Full disclosure — I did not know what grits were. I knew it was a Southern delicacy, and got the impression it was some sort of super-powered hash brown. When I Googled, the first result was a Paula Deen recipe, which should have given me a hint as to what I was getting into.

I didn't realize that grits were actually a corn product. I also didn't realise that they look a bit like mashed potatoes, or that they're actually a breakfast food. Grits, perhaps surprisingly, are not actually easy to find in a country that likes porridge, rice pudding, and other celebrations of the gelatinous, so I had to improvise with Jamie Oliver's suggested replacement, polenta.

The Great British Grit Experiment, which was essentially polenta with some cheese and salt in it, was pretty OK, though it did make my arteries feel a bit odd. Is this how Deen feels all the time? Awkward.