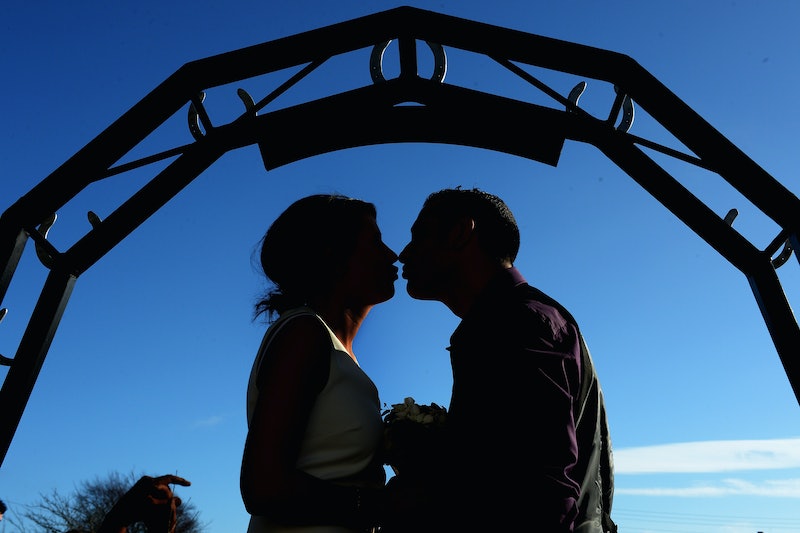 So recently, a study out of Emory University caught everyone's attention by announcing that the more expensive your wedding, the more likely you are to get divorced. Apart from the fact that this kind of thing is probably the stuff of nightmares for everyone who works at the Say Yes to the Dress store, it's also a little confusing, and not just because the wedding industry has long been trying to convince us that if we have the perfect wedding (with all the costly extras) we will have a perfect marriage. There are actually a surprising number of studies about weddings and their effect on the outcome of your marriage, and not all of them seem to support this finding.

So what's the truth? And most importantly, how do make sure your wedding isn't launching you down the road to divorce?

Well, before we get started, it's worth pointing out two things: First, these studies all only demonstrate correlation, not causation; in other words, there's no evidence that what sort of wedding you have causes your marriage to succeed or fail. And second, even if there were a clear causal link in any of these studies, they still can only speak to likelihoods; none of them can predict the future for individual cases.

But that doesn't change the fact that this stuff is bizarrely interesting. So let's see what it's all about.

Are Expensive Weddings Linked to Divorce?

The short answer here is "yes." Not only did the Emory University study mentioned above find that people who spent over $20,000 on their wedding were 3.5 times more likely to divorce than people who spent between $5,000 and $10,000, it turns out that study isn't alone. More expensive wedding rings have also been linked to higher divorce rates, as well.

So I Should Just Elope?

Not necessarily. While there are studies that suggest a link between an expensive marriage and divorce, another study finds that wealthy people — who you'd assume to be the ones who spend the most on weddings — are more likely to have their marriages work out. And there's also evidence that having a big wedding with lots of guests — which would presumably cost much more than a small wedding — makes a couple less likely to split up.

So What's the Deal?

Well, in a nutshell, that it's complicated. After all, we can't say for sure why any of these things happen. For instance, maybe the financial burden of an expensive wedding puts a strain on a couple's relationship and starts them off on shaky ground — or maybe couples who feel more insecure in their relationship are more likely to throw a lavish wedding to compensate. Or maybe both stem from the same root cause, like one spouse having poor impulse control that can lead to both excessive spending and to all kinds of potentially hurtful behavior down the road. Who knows?

Additionally, while it seems plausible that being wealthy helps a couple's relationship by causing less financial stress, or that having more guests at your wedding is good for your relationship because "commitment is strengthened when it is publicly declared," as the study's authors suggest, there is still no way to know any of this for sure.

If we are looking for a takeaway message, though, it seems to be that at the very least there is no reason to believe that having a lavish wedding is a good thing when it comes to your marriage. Instead, it seems that if anything about your ceremony is going to give your marriage a helpful, long-term boost, it's sharing the day with the people in your life.

But ultimately, as I said before, none of this is going to predict your future — though it is helpful to keep in mind if you're feeling pressured to spend extra. So really, it's probably best to just go for the wedding that feels right to you. Best wishes!