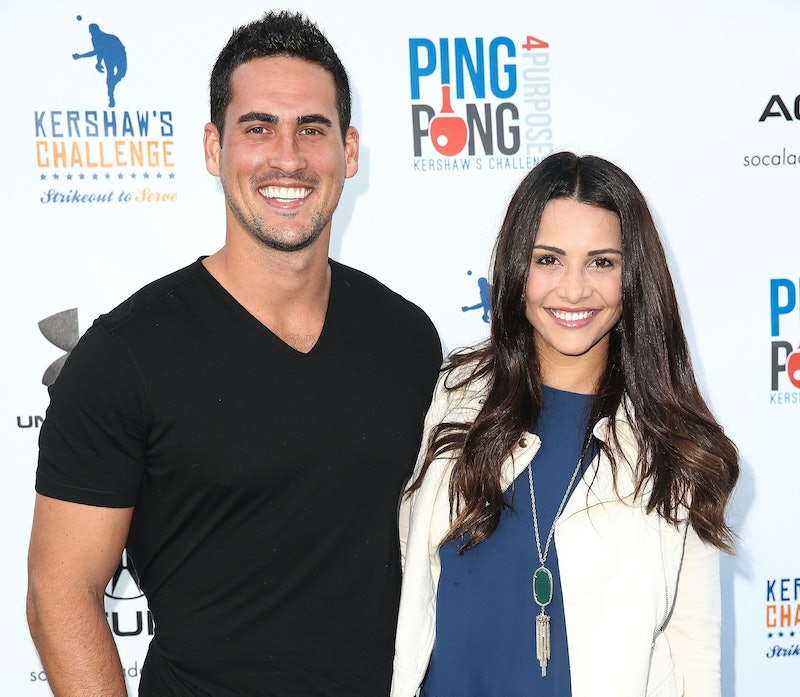 Brace yourselves, Bachelor fans, I have some upsetting news. As confirmed in a joint statement from the pair, Andi Dorfman and Josh Murray have split up. If you're not surprised, I'm right there with ya. And if you are, then, well, you are much less cynical than I am. The only reason the news is even sort of surprising is because of the love fest Andi and Josh put on at the Bachelor live season premiere on Monday, Jan. 8 — only three days before news of their split broke.

At the entirely unnecessary red carpet event — Seriously? Everyone just walks the red carpet then goes inside to watch a pre-filmed episode of The Bachelor? Lame. — Andi and Josh spoke with Chris Harrison as well as Access Hollywood about being in love and their upcoming wedding. And while they did admit that they didn't have any definitive wedding plans, it wasn't because they were about to break up, but rather because they were just relaxing and enjoying each other's company.

Who knows. Maybe they were really in love and everything was going perfectly up until Wednesday evening when they decided to come together, bang out a joint statement, and get going their separate ways.

Or! Maybe they were already planning the breakup when Monday's red carpet took place and decided to still attend because it gave Andi and chance to show the world she can make a gorgeous dress with $15 and a single piece of fabric and gave Josh the chance to... watch The Bachelor on a big screen? I don't know, alright?! All I know is that this would be a really fast turnaround on the "we're in love" front, and so I think they were spitting some half-truths on the red carpet that should've been dead giveaways that this relationship was dunzo.

Here are eight times in particular we should've noticed this relationship was over:

Andi: “I love when people are like ‘we knew you were gonna choose Josh! We would've chosen him too!’"

When they said of their wedding that they just want to "enjoy each other for a while."

Josh: "We're looking forward to just settling down and relaxing and just having fun with each other."

Andi: "I think we're open to whatever. Honestly we haven't even taken a breath in 2014...so once we take a breath we'll figure out what we want."

Aka what we need to figure out is whether we still want to be together.

Food and wine? That's what people talk about when they are totally, 100 percent still planning a wedding, right?

This happened when they were asked by Access Hollywood about the new season of The Bachelor and all I can say is yikes!

When they laughed way too hard at each other's awkward jokes:

That's just too much laughing, guys. We should've know. We. Should. Have. Known.