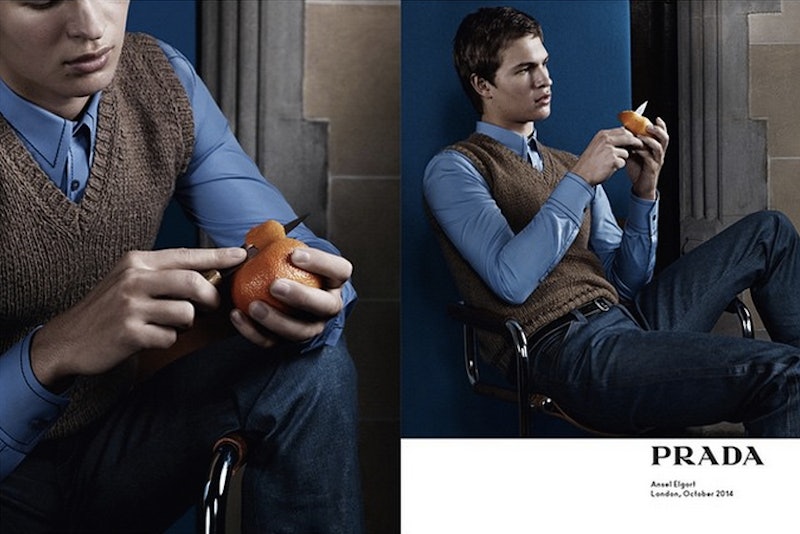 Even though most parts of the country are only now entering their second annual Polar Vortex, with people thinking of nothing besides fleece-lined apparel and down feather stuffed coats, the fashion world is debuting Spring ad campaigns faster than we can drool over them longingly. You know, fashion waits for no one. Lucky for us, pop culture’s leading lads are well on their way to taking over this season’s advertising, heating up the internet and making us forget all about the arctic temperatures outside our windows. Whose handsomeness is currently at the core of fashion’s very own global warming you ask? That’s easy. Prada's Spring 2015 campaign features Ansel Elgort and Miles Teller.

By this point, we all know that Justin Bieber is the new face of Calvin Klein, and his abs and apparently photoshopped bulge certainly caused a heatwave of their own own during last week’s debut. And those tattoos? I get it. Bieber and his Calvin's undeniably had many a temperatures rising. At the time, it may have even been hard to believe that anyone could out-hot the scantily clad pop star, but then again, who would have guessed that a creative genius over at Prada would pluck the year’s two biggest breakout young adult actors for their spring campaign? Not to mention make them more swoon-worthy than ever before.

One or both members of this dynamic duo became the celebrity crush of pretty much anyone paying attention over the last year. Elgort made us feel all the feels as Augustus Waters in The Fault in Our Stars and Teller made us both laugh and cry with various films including That Awkward Moment and Whiplash (and let's not forget about 2013’s The Spectacular Now because, ugh. So good). There is also this little trilogy called Divergent, in which they both give Theo James a run for his very sexy money — not an easy feat. So clearly, there is no question of why Prada chose to take these two young Hollywood hunks and turn them into the suave, debonair, Rat Pack-esque stars of their smokin’ hot spring campaign. Ah, but as they say, a picture is worth a thousand words, right? Allow me to step aside then, and let the art speak for itself.

Hello, Prada? The mercury is rising. Sure, these pictures say it all, but for fun, let’s obsess over this campaign perfection a little more and talk seven reasons why Ansel Elgort and Miles Teller for Prada is everything.

High fashion house Prada isn’t one to consistently dote on Hollywood's hottest, but clearly they figured out what the rest of the world also concluded this year: Ansel Elgort and Miles Teller define "breakout stardom." These two fresh faces give Prada a whole new level of cool, and it will be a good, long while before the women of the world ever tire of that type of swag.

Thanks to the phenomenons that are the Victoria's Secret Fashion Show, Cara Delevigne's on fleek eyebrows and Kendall Jenner's domination of everything from Chanel to LOVE Magazine, being a breakout male model is definitely the road less traveled. While I am a total proponent of girls running the world, our favorite man candy deserves some time to shine. We can only hope our beloved pop culture hotties continue to rack up as many ad campaigns as our favorite females.

James Dean? Is that you? No, wait — that’s just Miles Teller solidifying his position as our generation's very own living, breathing rebel without a cause. Are we sure Taylor Swift wasn't singing about Teller? That smolder. That jawline. That hair. DREAM. BOAT.

I beg you to name a time during which a sweater vest has ever looked that good. Layered over a dress shirt tailored to PER-FEC-TION and paired with daammnn-worthy denim, Elgort makes us swoon over sleeveless sweaters — a notion I thought impossible until now.

Excuse me, Miles Teller, is that a mustache we see? For Prada, Teller's usual baby face is out and a slightly mature, modernly rugged look is in. I wholeheartedly approve.

Apparently peeling a tangerine with a knife or penning an invisible note on your palm is super sexy. I wouldn't recommend trying this at home, but Teller and Elgort make random acts look good. [Majorly hot] mischief managed.

7. BIG SCREEN IN BETWEEN

It has been an eternity (OK, mere months, but it seems like an impossibly insurmountable amount of time) since we have seen these two on the big screen and the Insurgent premier is still two whole months away. Many thanks to Prada for giving us an outlet to swoon over our celebrity crushes whilst we wait for the movie theatre reunion.

On a separate yet completely related note, how lucky is Shailene Woodley? Homegirl, who the whole of America loves just as much as Elgort and Teller, has starred opposite Prada's new prodigy's in multiple major films. Some girls have all the luck. At least the rest of the world has the Prada Spring 2015 campaign.

More like this
Phoebe Dynevor Serves ‘Bridgerton’ Underboob In Stunning Floral Gown
By El Hunt
Jennifer Lopez Wore A Naked Dress To The Shotgun Wedding Premiere
By Dominique Norman
J.Lo's Micro-French Manicure Has A Fun, Sparkly Twist
By Olivia Rose Rushing
The Biggest Fashion Moments Of Paris Couture Week 2023
By Dominique Norman
Get Even More From Bustle — Sign Up For The Newsletter
From hair trends to relationship advice, our daily newsletter has everything you need to sound like a person who’s on TikTok, even if you aren’t.