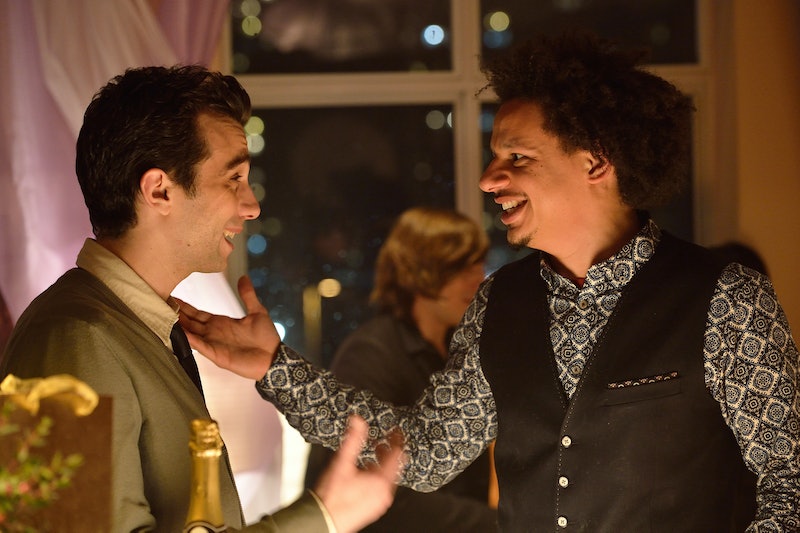 Jay Baruchel's new FXX series Man Seeking Woman (premiering Jan. 14 at 10:30 pm) is based off of the book The Last Girlfriend on Earth: And Other Short Stories by Simon Rich. And as with every page-to-screen adaptation, there are differences between the book and show for Man Seeking Woman . But for purists out there that always prefer the original work — don't fret. Author Rich (previously a staff writer for Saturday Night Live, which could have contributed to why Vanessa Bayer makes an appearance on the FXX show) not only created the show, but is also an executive producer. Baruchel, in a phone interview with reporters, said, "This is Simon's baby. My job on set is to help him tell his story and to do my best to breathe life into this character he wrote."

The book is broken up into three parts — "Boy Meets Girl," "Boy Gets Girl," and "Boy Loses Girl." An obvious difference between the book and the show is the title change, but the series is named after one of the short stories in the "Boy Loses Girl" part. As for how much the show will be like his stories (three of the story ideas were used in the first episode), Rich told HitFix in an interview, "We burned through [the book stories] pretty quickly. I would say that it's mostly original. I don't know the exact proportions but in the book I relied a lot on literary tropes and also just text-based formats that I thought would be fun to play with."

And of course, there are some things in his book that just cannot translate to screen, but that doesn't seem to bother Rich. "You can't have an archaeological excavation report as an episode, but ... we get to play with a lot of filmic tropes," Rich said to HitFix. "So we can employ tropes from horror movies or from Olympic sporting events or whatever it is. So we lost some weapons but we gained a lot more."

In the Baruchel interview, he said, "If we shot the entire show word-perfect, it would be every bit as funny as it is now ... that's part of Simon's genius is that, like anybody who has ever read anything he has written, is he slaves over his choice of words and his choice of punctuation." And Rich's talent shines through in his short stories. He was the youngest writer ever for SNL, so not only is his use of language strong, but his grasp of mixing the absurd with pop culture references is dead-on.

Considering that the show "burns" through the original stories, we'll probably see a little of this:

The One With The Personified Condom

The first story from The Last Girlfriend on Earth: And Other Short Stories, "Unprotected," is available online to read, and it's a clever personification of a condom who acts as a window to the life of a young man (named Jordan) as he gets his first girlfriend in college. But the book is not the story of only Jordan like the show is (currently) the story of Josh.

The One With Mr. Goat & The Phantom Friend Zone

The next story's ("Magical Mr. Goat") setup is that of a child's fairytale with nine-year-old Olivia having a Mr. Goat (who stands and wears a suit) come through her looking glass to play. But, of course, Mr. Goat wants to be more than just friends and the pair have to have the familiar conversation of whether or not young Olivia led Mr. Goat on by riding on his back (oh, how I'd love to see that one play out in Man Seeking Woman).

The One Where God Cuddles

The story "Center of the Universe" has God creating the world, and having his girlfriend Kate bug him about being distant (hmm, a typical jab at women, wrapped in an amusing package). But in the end, God quits his job of creating the universe because he really wanted to spend time with Kate (and on the seventh day, he cuddled).

The One With The Love-sick Caveman

"I Love Girl" is the tale of a lonely caveman dealing with unrequited love (the Girl is with the one artist caveman — typical) and includes lines I giggled at, such as, "If I owned Girl, I would only command her to mate with me in front of crowds if it seemed like she was in the mood to do that."

The One Where Relationships Are Like Peyton Manning, Or Something

Rich must have an issue with artists because the final story of the book is "Trade," comparing relationships to sports trades. The main character, Josh (oh hey! that's Baruchel's character's name on the show) is traded by his girlfriend for an artist. But whenever you think a story may just be a knock at women, Rich shows that it's not as simple as that.

Each story is a unique twist on common romantic struggles — and it doesn't take itself too seriously, which is what Man Seeking Woman really appears to be all about. So although you may not be able to relate to going on a blind date with a troll, having a priest come to your apartment to perform an exorcism because your ex's stuff is haunting your place, or entering a war room to draft the most perfect text, you will still be able to relate to the core messages. And a lot of these bizarre moments will be reflections of (if not pulled directly from) Rich's book.

"I like to think that when people see [the show], they will see at least one thing they went through," Baruchel said. "Ideally, a whole bunch of things they went through." Even if not all of the bits land or you can't personally identify with each trial Josh goes through, seeing the juxtaposition of the outrageous with the commonplace is what makes the show so amusing — and endearing.