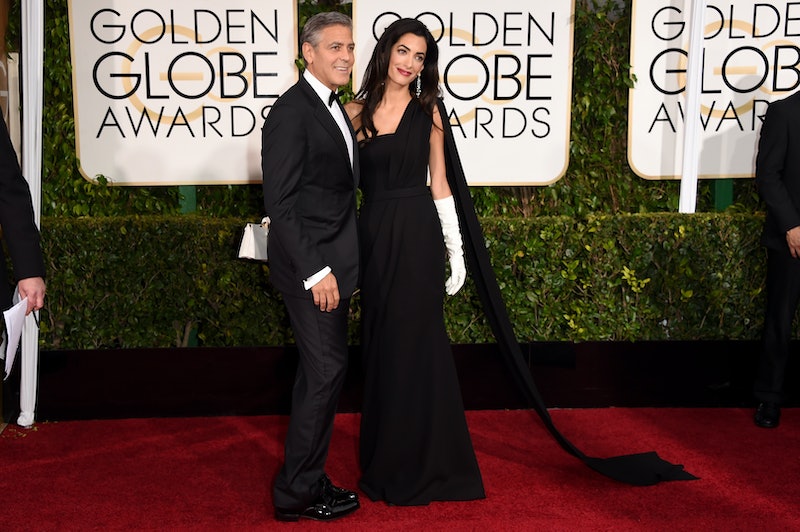 One of the best running jokes of the past year is the "fight" between Tina Fey and Amy Poehler, Golden Globes hosts, and George Clooney. It all started at last year's awards ceremony, when the comedians made an amazing joke about how the actor's role in Gravity paralleled his feelings about dating women his own age. Clooney, naturally, took the jab to start a war with the hosts, saying that “they have poked the bear with a stick.” He enlisted Matt Damon for a prank, to which Fey and Poehler responded in turn, and another, darker prank may or may not have occurred before Poehler surrendered on Late Night. But it turns out the war isn't totally over, as Fey and Poehler took their hosting gig at the 2015 Golden Globes to make fun of Clooney once again.

During their opening monologue, the hosts made fun of a number of stars in the audience, from Julia Louis-Dreyfus to Matthew McConaughey, but it was their joke at Clooney's expense that garnered the most laughs. Said Fey: "George Clooney married Amal Alamuddin this year. Amal is a human rights lawyer who worked on the Enron case, was an adviser to Kofi Annan regarding Syria and was selected for a three-person UN commission investigating rules of war violation in the Gaza strip, so tonight her husband is getting a lifetime achievement award."

And burn. Thankfully, Clooney seemed to find the joke as funny as everyone else did; audience members from Kate Mara to Jeffrey Tambor were shown cracking up following Fey's comments. Alamuddin laughed, too, albeit with slightly less enthusiasm, but that's probably due to her frustration over having had to deal with the E! red carpet team earlier in the night. The Golden Globes would undoubtedly be a trying experience for anyone, but if you're an internationally renowned lawyer and activist still best known for marrying a famous dude, you probably need more than a few shots of tequila to get through the night unscathed.

More like this
Amanda Seyfried Reflects On 'Mean Girls' & "Gross" Remarks That Men Made After It
By Jake Viswanath
Lydia Leonard Is Setting The Record Straight
By Olivia-Anne Cleary
Sandra Bullock, Girlboss Extraordinaire
By Matt Harkins & Viviana Olen
Spice Girls’ Net Worth: The Richest Member Is Wealthier Than The Rest Combined
By Hugh McIntyre
Get Even More From Bustle — Sign Up For The Newsletter