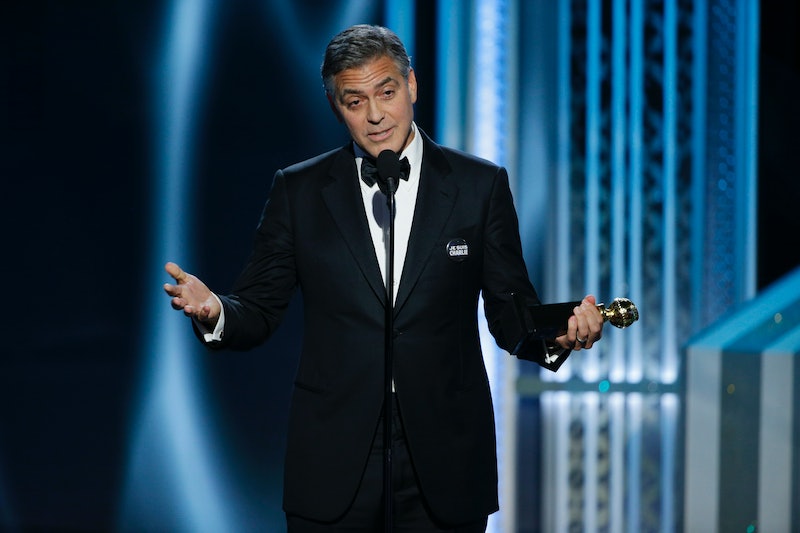 It doesn’t matter whether you love his acting, hate his direction, miss his small screen days, disapprove of his fast and loose lifestyle, or have any other discernible opinions about George Clooney. There is no denying that he all but exemplifies the idea of “movie star” in the contemporary Hollywood world. As such, even at only 53 years of age, it doesn’t seem all too outlandish for the HPFA to grant Clooney a Cecil B. DeMille Lifetime Achievement Award at this year’s Golden Globes.

Clooney was offered quite the introduction: first, a chiding but affectionate speech from two former costars — Julianna Margulies (with whom Clooney worked for many years on E.R.) and Don Cheadle (costar to George in all three of Steven Soderbergh’s Ocean’s flicks) — followed by a montage of some of his most important and influential performances and directorial features. Those highlighted include Gravity, Perfect Storm, Good Night, and Good Luck, Confessions of a Dangerous Mind, Syriana, Michael Clayton, E.R., South Park: Bigger, Longer, and Uncut (in case you didn’t know, he voices the doctor who inadvertently kills Kenny), Up in the Air, O Brother, Where Art Thou, Oceans Eleven and Twelve, Leatherheads, The Ides of March, Three Kings, The Descendants, and even Clooney’s yet-to-release film Tomorrowland. The reel included footage of his work with the Shoah Foundation as well.

When the tour de force that is Mr. Clooney finally took the stage to make his speech, he covered the full gamut of conversations worth having this year. He joked about the Sony hacks, saying that the Golden Globes is an opportunity for Hollywood folk to “meet face to face and apologize for all the snarky things we’ve said about each other.” He decried the notion of the award as the highest testament to an actor’s talent, stating, “I don’t remember what awards Lauren Bacall won, I just remember her saying, ‘You know how to whistle, don’t ya, Steve?’” followed by a similar admiration for Robin Williams (calling out in particular his famous Dead Poets Society “carpe diem” line).

In what was perhaps the most touching moment of his speech, Clooney turned focus to his wife, activist and writer Amal Clooney. Naturally, no one was surprised by his mention of his new spouse, but by the fact that the usually stoic and facetious Clooney broke down in tears professing his love for her. “It’s a humbling thing when you find someone to love,” Clooney said. “Especially when you’ve been waiting your whole life… and if your whole life is 53 years…” Though he trailed off a bit at this point, everyone got the message.

Clooney closed the speech with a reverent profession of support for Charlie Hebdo and all those working to forward his movement. An all around classy set of words from today's portrait of the movie star.