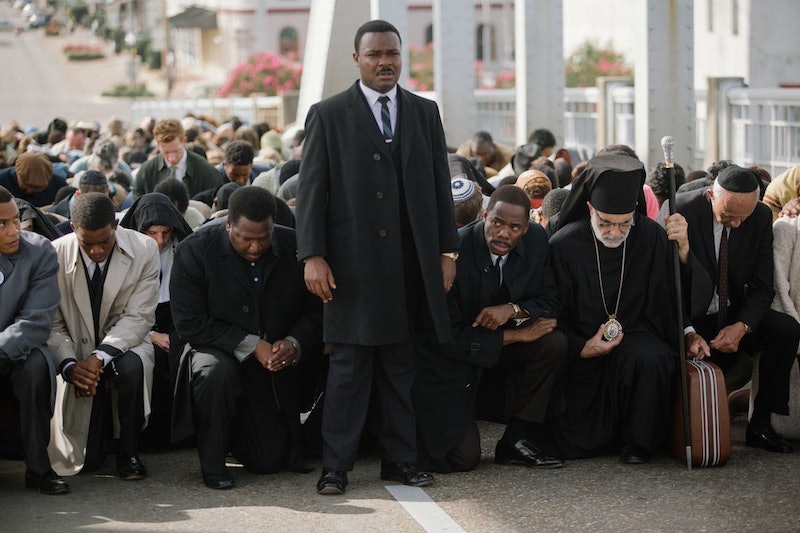 With many great feature films to recognize, too few categories with which to honor them, and an inconsistent loyalty to genuine quality, your average awards organization — the Golden Globes, for instance — is bound to overlook a few deserving parties. This year, the Hollywood Foreign Press Association got a lot right: victories for Boyhood, The Grand Budapest Hotel, and Still Alice star Julianne Moore are laudable decisions across the board. But it also made a few fatal errors, the most of which being its complete dismissal of the 2014 civil rights dynamo Selma in all major nominated categories: Best Motion Picture – Drama, Best Director, and Best Lead Actor in a Motion Picture – Drama. Selma’s only victory of the name came in the Best Original Song category, which isn’t quite the tribute that such a powerful and important films deserves.

The big concern is that the Globes’ oversight will be echoed by the Oscars, whose “seal of approval” is just what Selma needs to get its invaluable message out to the masses. But we shouldn’t be so quick to assume that the Academy will be just as negligent as the Hollywood Foreign Press Association. The past half a century has seen many examples of Oscar showering kindness upon movies all but forgotten by the Globes. Could Selma join the ranks of the following Golden Globe snub victims that wound up winning big at the Oscars?

Now held as a cult phenomenon and a tour de force of the New Hollywood vision, the 1969 Best Picture Oscar winner Midnight Cowboy did not fare too well at its Golden Globe ceremony. The movie began the night with six major nominations (Best Motion Picture – Drama, Best Director, Best Screenplay, two Best Actor in a Motion Picture – Drama nods, and one for Best Supporting Actress) losing out in all aforesaid categories. The only trophy that Midnight Cowboy did take home that evening was in the now defunct Most Promising Newcomer category for its young star Jon Voight.

The iconic war film did a smidge better at the Globes, but not much. Star George C. Scott got his due with a Best Actor in a Motion Picture — Drama award, but the film was not the victor in its nominated categories for Best Motion Picture – Drama or Best Director.

Three years later, another now regaled Best Picture Oscar winner got a raw deal at the Globes. However, this one didn’t have a chance to begin with. Robert Redford and Paul Newman’s classic The Sting was only nominated in one category: Best Screenplay, losing out to William Peter Blatty’s The Exorcist.

Here’s a shocking one. The very next year, The Godfather: Part II — a film widely considered one of the best ever made — suffered a winless Golden Globes despite six nominations in four major categories (Best Motion Picture – Drama, Best Director, Best Screenplay, and Best Actor in a Motion Picture – Drama), as well as two smaller categories (Best Original Score and Most Promising Newcomer).

The Oscars would eventually delight in the energy and charm of this now beloved sports film, but the Globes barely paid it any mind. Chariots of Fire was only nominated in one category: Best Foreign Film. It did win that one at least, though.

The Silence of the Lambs

This one actually makes sense: the utterly abysmal Crash was never even nominated for Best Motion Picture – Drama or Best Director. It did, however, manage Best Screenplay and Best Supporting Actor nominations, but that’s far better than its Best Picture victory at the Academy Awards. Man. How did we let that happen?

So at least Selma is in some good company! … and Crash.

More like this
Remember When Benedict Cumberbatch Announced His Engagement In A Newspaper Ad?
By Hugh McIntyre
Tom Cruise Gives His Honest Review Of Lady Gaga’s New Song For 'Top Gun: Maverick'
By Hugh McIntyre
Regina King Puts Her Career, Family, & Friends Before Romance
By Jake Viswanath
Cameron Diaz Just Recreated *That* Iconic 'There’s Something About Mary' Scene
By Rachel Mantock
Get Even More From Bustle — Sign Up For The Newsletter