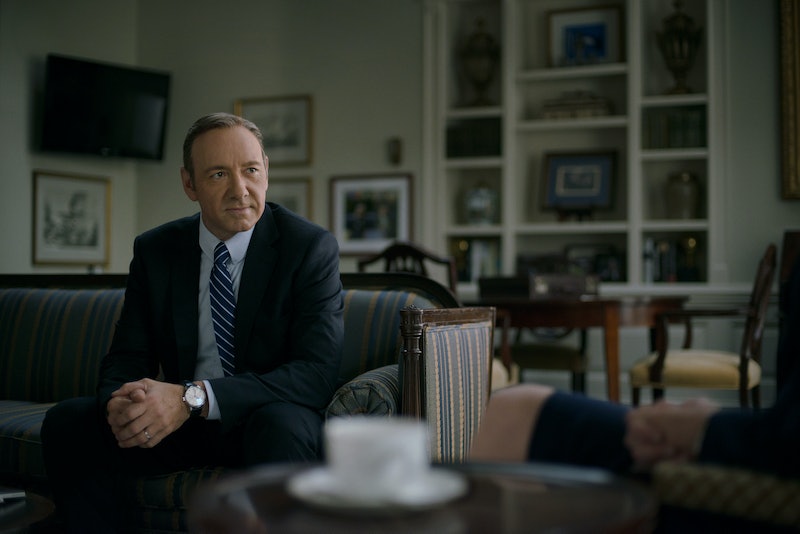 As someone whose intersection of politics and pop-culture was limited to the occasional episode of Veep, I was late to hop on the House of Cards bandwagon. The second season, which was released on Netflix on Valentine’s Day last year, just happened to coincide with the week before I was moving out of state, and I decided to binge-watch while I binge-packed (but really binge-procrastinated).

The series follows political power players and husband-and-wife team Frank and Claire Underwood (played by Kevin Spacey and Robin Wright) as they fight their way to the top by nothing short of any means necessary. It’s chock-full of betrayal, crime, and mental and physical abuse. I finally understood what everyone in my Twitter feed was raving out.

What really got me hooked on the series, though, was its expansive range of characters. House of Cards explores a very stigmatized world (Washington D.C.) and dives deep into the lives and ulterior motives of each supporting character — from journalists to former prostitutes to small business owners to FBI computer hackers. And even through the lies, schemes, and almost every other evil doing imaginable, I somehow still find myself rooting for many of them.

Season 3 returns on February 27, which still isn’t soon enough. To make do, I’ve compiled a list of 10 books that feature similar Machiavellian players, political and corporate corruption, and marital mishaps to re-read and re-analyze while you and I wait for the return of House of Cards.

Thank You For Smoking by Christopher Buckley

This satirical 1994 novel (which was adapted to film by Jason Reitman in 2005) will resonate with House of Cards fans that are particularly drawn to its over-the-top political irony. Thank You For Smoking profiles the life of Nick Naylor, a lobbyist and spokesperson for the Academy of Tobacco Studies (otherwise known as the number one enemy of the American Cancer Society) who uses high-profile events and manipulative rhetoric to promote the backlash against the cigarette industry.

The only character more power-hungry and willing to kill anyone that stands in the way of a secret aspiration for leadership than Richard III of York is Francis Underwood. Lovers of Frank’s deceit through intelligent, meticulous scheming will be fascinated by Richard III — a man so bitter and jealous of his brother, King Edward IV, that he manipulates Lady Anne into marrying him even though he murdered his first husband (and it only starts there). Not to mention the famous opening monologue (“Now is the winter of our discontent...”) is frighteningly reminiscent of Frank Underwood’s narrations.

Anyone who watches House of Cards knows that Claire Underwood is just as important of a player as her husband in his path to President. While Curtis Sittenfeld’s first novel Prep examined the world of a posh East Coast boarding school, American Wife dives into a similarly elite environment: the White House. The difference between this marriage and the Underwoods’ is first lady Alice Lingdren’s (based on Laura Bush) public opposition of one of her husband’s largest Presidential decisions — to declare war on Iraq.

The Last Thing He Wanted by Joan Didion

A sometimes forgotten work in Didion’s expansive collection, The Last Thing He Wanted (1996) is what I would recommend for those interested in Zoe Barnes and the other D.C. journalists fighting briberies and conspiracies. This story follows a Washington Post journalist who quits her assignment covering the 1984 Presidential primaries to look after her father, a former arms dealer for the U.S. Government in Central America.

The Years of Lyndon Johnson by Robert Caro

While hardcore fans will recognize one part of this massive biography (The Passage of Power) on Frank Underwood’s desk in the last episode of Season 1, history buffs will recognize the haunting political similarities between Frank and LBJ. Four of the five planned volumes are completed, and if you have to pick one, I’d suggest reading Master of the Senate — LBJ’s moves to pass the Civil Rights Act of 1957 are frighteningly similar to Frank Underwood’s efforts as the House majority whip.

A Brief History of Seven Killings by Marlon James

On the surface, Marlon James’ 2014 release is a crime novel that centers on the 1976 assassination attempt on Bob Marley. What it really is, though, is as an entry into culture, poverty, race, class, and domestic and international Jamaican politics. What HOC fans will love about this story is the range and depth of its characters. Brief History isn’t narrated by “The Singer,” but by the people around him — everyone from a Rolling Stone journalist to CIA operators to former members of the Cuban Bay of Pigs. The short but expansive chapters take us into different members of this world — making the pages as easy to turn as it is to hit “play next episode.”

I know it might seem strange to include fiction writer and pop-culture essayist Roxane Gay on a list dominated by political novels, but some of the essays in Bad Feminist had me thinking quite a bit about Claire Underwood. In one essay, “Not Here to Make Friends,” Gay writes on the subject of unlikable characters, and the dramatic difference in our analysis of unlikable male vs. female characters:

When women are unlikable, it comes a point of obsession in critical conversation ... Why are these women daring to flaunt convention? Why aren’t they making themselves likable (and therefore acceptable) to polite society?

I’m not sure, but it’s a brilliant thought to keep in mind when comparing Frank and Claire’s comparable evilness.

All the King’s Men by Robert Penn Warren

The 1947 Pulitzer winner and one of the most revered American novels of the 20th century, All the King’s Men follows the ruthless rise of Southern populist governor Willie Stark as told by reporter Jack Burden, the governor’s right-hand man. A staple in political fiction, it’s hard to read this novel without thinking that it inspired the core of House of Cards.

More like this
16 Novels That Paint A Realistic Portrait Of Abortion
By K.W. Colyard
Yes, Joseph Quinn Is Actually Playing The Guitar In This Epic 'Stranger Things' Scene
By Alyssa Lapid
Florence Pugh & Zoe Kazan Have Teamed Up For A Major New Netflix Series
By Rachel Mantock
Everything To Know About 'The Undeclared War' Season 2
By Rachel Mantock
Get Even More From Bustle — Sign Up For The Newsletter