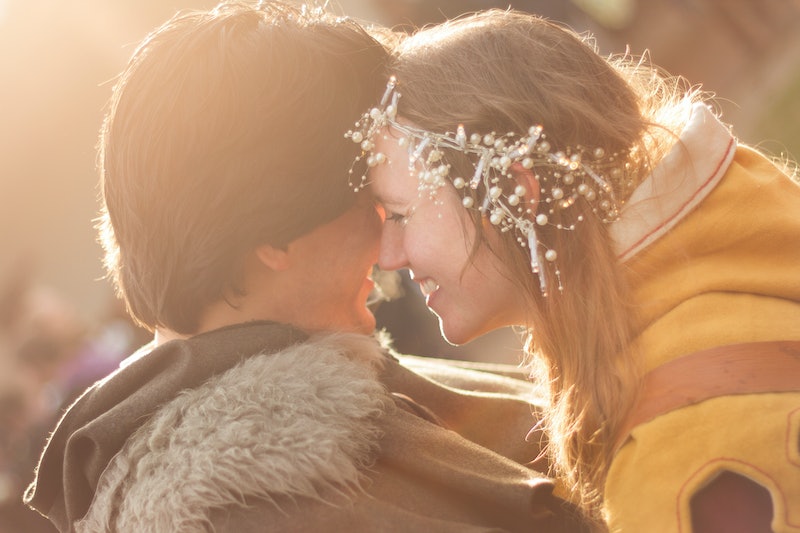 I’m of the thinking that Valentine’s Day is the worst. Even when it’s great, it’s still sort of bad, because we put all these expectations into the big day, and expectations and real life never mix. Because I know this now, and have for some time, I’ve more or less given up on the day. It’s not as though I was its biggest supporter or anything, but I have found that even though I'm married now, spending the day with friends — or even alone — suits me better. I’m just over the inevitable Valentine’s Day drama.

Once you’ve been doing the V-Day thing long enough, you find you have a pile of experiences that fall into either the good category or the bad category. From those two categories, you can probably easily choose the best and the worst of your Valentine’s Day experiences. And you’re not alone — we all have them. (It's no coincidence that Facebook sees a surge in breakups right after the holiday.)

Bustle asked a few readers to, as much as it pained them, recollect their absolute worst Valentine’s Day stories and share them with us. What they had to tell us was pretty depressing, and will probably make you want to throw in the towel on the whole thing, too. And if not? Well then, more power to you.

“I think [my worst Valentine’s Day] would be buying non-refundable tickets to go see my boyfriend in Georgia. We'd been doing the long-distance thing for a while and I had plans to go visit him. And then, about a week after I bought the tickets, he just stopped talking to me. Forever. No response to my texts, never answered my calls or emails. Nothing. So I spent my Valentine's Day alone and broke because I had these tickets I couldn't use.”

“Boston Market. I ate. He didn't. He counted toothpicks instead. Forty-two. He grabbed 42 toothpicks and this meant something to him, because A Hitchhiker's Guide to the Galaxy. I was 14. It was our last date.”

“My boyfriend took another girl to a fancy dinner and didn’t even bother lying about it to me. He thought I’d understand, because he was in love.”

“I spent most of Valentine’s Day afternoon preparing a dinner for my girlfriend. I set the dining table with the good China, the cloth napkins, all of it. I sat and waited and waited… and waited. She finally came home late that night and being suspicious, because she had been acting weird for the past few weeks, I checked her phone... and saw the texts. She was cheating on me and had spent the day with him.”

“My dog got into my Valentine's Day chocolate that my girlfriend gave me, and later died from chocolate poisoning. I was 16, and had stupidly left the candy out.”

“It was my first official Valentine’s Day where I had an SO... He came by my dorm room with three gifts: white wine, an oil candle, and a hard teddy bear, the kind with arms and legs that move. I hate white wine, I was living in a dorm so all candles were off limits; especially ones that required oil to get started. The bear was so expressionless that I was forced to see it as a metaphor for how much he didn’t know me and how lifeless he was. I waited until after his birthday (a couple weeks later) to end it.”

“I thought someone cared and who had plans to see me, but he canceled the flight to spend the weekend with someone else.”

“It was the Valentine’s Day that I got to spend with both my long term partners — [my] husband and girlfriend. She had just moved in with us in a more permanent fashion… we had a lovely dinner at home… the husband cooked, the girlfriend and I put on lingerie for dinner. After dinner the sexy time was divided between people in different rooms. I was stupidly happy and had no idea that very soon after I would start developing problems with the girlfriend… she just wanted to be friends and moved back to her former hometown to be with — get this — my ex-boyfriend."

“I'd been dating a girl for awhile and wanted to surprise her with a balloon and flowers. I spent all day making the elaborate plans and getting everything I needed. I kept trying to call her all day, and she didn't pick up. I didn't think much about it, maybe I should have...

Anyway, I get everything loaded and I head over to her apartment. I saw her car and the light was on. So I got the stuff, and knocked on her door. When the door opened, it was some guy, and she in the back saying, 'Who is it?' Shocked, I quickly made up some lie that I had a delivery for some fictitious name and must have gotten the wrong address … I drove away. I spent the rest of the night at a park, sitting in my car and listening to a ball game on the radio, not really reacting or anything. The balloons and flowers remained in the back seat of my car until the flowers died and the balloons deflated. I never talked to the girl again.”

“I was driving through campus to meet some girlfriends, because we were doing the single girl thing. As I drove past [the coffee shop] on Main Street I saw my ex-boyfriend and went into a rage ... I went up over the curb and on to the sidewalk in front of him. He accused me of trying to kill him. I think I was just so focused on him that I accidentally drove in that direction."

11. "We Both Ended Up With Salmonella Poisoning..."

“I had already made sangria and was planning to make a chicken dish for dinner. In the fridge, the sangria was under the thawing chicken and, as I would find out later, was dripping into the sangria — the sangria that we finished off, because my sangria is that good. Long story short: We both ended up with salmonella poisoning later that night and had to take turns using the bathroom. I like to think it brought us closer together.”