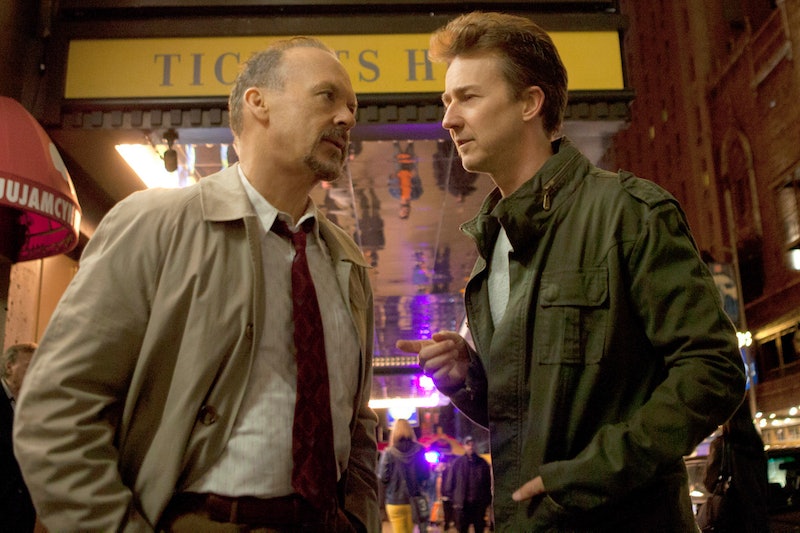 Once you get past the lack of female representation and all those awful snubs, the eight movies nominated for this year's Best Picture Oscar are actually a pretty interesting bunch. There's Birdman, a technical feat of a story that masterfully mixes fantasy and reality; Boyhood, an epic look at the life of one child over 12 years; The Grand Budapest Hotel, a visually stunning comedy told in a style unlike any of its fellow contenders... Each of the eight nominees offers something different to audiences, whether it's heart-pounding action sequences or uncomfortable truths about our American history.

Yet this late in awards season, critics and viewers alike have analyzed practically every aspect of them to death. Just in the past few months, there's been the discussion over Selma 's inaccuracies, debate over American Sniper 's merit, and thinkpieces from every outlet there is dissecting the details of Boyhood 's production. Still, while it might seem to many that there's nothing that hasn't been discussed from the nominated films, there's actually still a lot left to learn. Below, what you might not have known about each Oscar nominee — until now.

On-set drama: J.K. Simmons really did slap Miles Teller during that scene. Whether he enjoyed it as much as his character, however, is unknown, but Teller certainly got his revenge when he accidentally cracked two of Simmons' ribs during in a different scene.

Staying in character: Just like Fletcher accuses Andrew of, Miles Teller actually couldn't tell whether he was rushing or dragging during the exhausting test.

Going too hard: According to a real Juilliard professor, Andrew's blood wasn't a result of intense practice, but wrong practice. For example, he said, the character played the single strokes at a speed and for a length unrealistic for most musicians, and while that may have helped show his tenacity, it wasn't what a skilled drummer would likely choose to do.

Missed opportunity: Chris Pratt almost starred in this movie. Just take a moment and imagine what could've been.

No pressure: Also most members of Chris Kyle's family have shared their approval of the film, the late sniper's father had a different feeling — he apparently told Clint Eastwood and Bradley Cooper that he would "unleash hell" if they tainted his son's memory.

Reality check: That was Stephen Hawking's real voice at the end of the film; the filmmakers hadn't been able to create one that sounded realistic enough, so Hawking volunteered his own. As if that wasn't enough, the scientist also lent the film his real Freedom medallion and thesis to use as props.

A lasting bond: Theory is actually the second time Emily Watson and Felicity Jones have played mother and daughter on-screen; the women starred together in 2010's Cemetery Junction.

Making (movie) history: Surprisingly, Selma is the first theatrically released biopic of Martin Luther King, Jr., ever. There've been TV movies and documentaries, but until 2014, no major feature film.

Making (Oscar) history: Thanks to Ava DuVernay and David Oyelowo's snubs, Selma is the only Best Picture nominee, and the only contender since 2011, to have received just one other nomination — and the first film in over 30 years to not have that other nomination be in one of the big categories such as acting or directing.

Keeping the voice: Do King's speeches sound a bit unfamiliar? They should — DuVernay couldn't buy the rights to the leader's real speeches, so instead she wrote new versions of them to use in the film. Talk about commitment.

Predicting the future? During one scene in the film, Mason and his dad talk about the possibility of a new Star Wars movie ever getting made. Four years later, Disney announced that a new part of the saga was in the works.

In case of emergency: Throughout the 12 years, the plan was that if Richard Linklater died during the shoot, star Ethan Hawke would take over as director.

Name change: Although the title Boyhood might seem perfect now, it wasn't Linklater's original choice. He had planned to name the film 12 Years or some variation thereof, but due to a little movie called 12 Years a Slave, he decided to go with a different title to avoid confusion.

Staying power: Budapest is the highest-grossing nominee of the eight, having made nearly $60 million. If that number seems a bit unimpressive, it is; none of this year's crop of films could exactly be considered box office gold, with the seven besides Budapest grossing just $30 million or less.

A key role: With a cast that big, Budapest's A-list ensemble might seem overwhelming, but one actor should stand out: Edward Norton, who, thanks to both this and Birdman, achieved the impressive feat of starring in two of this year's Best Picture nominees (not to mention getting nominated for his performance in one).

Method acting? Despite the story of Riggan/Birdman being quite similar to star Michael Keaton's own career trajectory — fame through superhero movies, refusal to do another, slow fade from the spotlight, attempt to make a comeback — Keaton's repeatedly said that the character is the most unlike himself of any he's ever played.

Shakespearian influence: Some critics believe that Birdman is a retelling of Macbeth , with Riggan as the title character, Birdman as Lady Macbeth, a vendetta against "witches" (aka critics), and extraordinary amounts of time and effort put into stopping a prediction from coming true (i.e. that his show is going to fail). Add in the fact that a character actually recites Macbeth lines, as well as the dancing trees in the play, and it's actually not the worst theory.

Total immersion: To look and speak more like Turing, Cumberbatch wore dentures just like the codebreaker's, despite it not being required by the filmmakers.

Big-screen changes: All biopics have their inaccuracies, but The Imitation Game's been accused of having more than most; from the "sole" Enigma code (there were several) to the name of the machine (the Bombe, not Christopher) to Alan's sexuality (it was less hidden than in the film), several of the film's major elements are said to be wrong.

Side passions: Those short scenes of Alan Turing running weren't as random as they seemed. The codebreaker was a skilled athlete, with a personal marathon time of 2:46:03. The real mystery, however, is where he found the time.