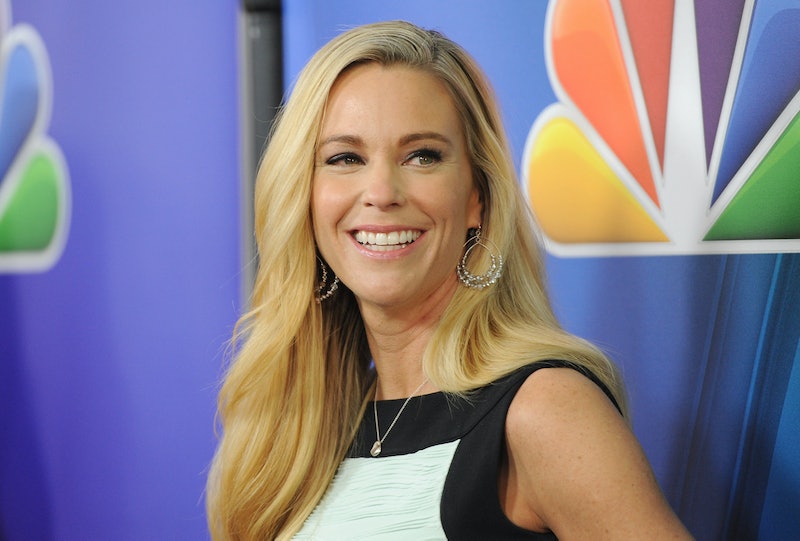 TLC has been airing promos for new episodes of Kate Plus 8 and the new season premiered on Tuesday, Jan. 13— wait, what?? The show was cancelled back in Aug. 2011, so why is Kate Plus 8 back? It was announced in Aug. 2014 that Kate and her troop of children that rivals the Von Trapp clan would return to TLC. For the love of Jon, how did this happen?!

This is far from the first time Kate Gosselin has returned to our TVs. Not only was she on Dancing with the Stars (of which we will not speak of), but she's also currently on Celebrity Apprentice. (She narrowly missed elimination in the Jan. 19 episode.) As for her reality show featuring her children, the Gosselins recently had a special to check in on the kids back in June 2014 called Kate Plus 8: Sextuplets Turn 10 . People magazine reported that the special drew in more than 2.1 million viewers, so I'm going to assume that's how (and why) Kate and her children are back with their series on TLC. (Although 2.1 million viewers may sound impressive, it's nowhere near the 10.6 million people who watched when Kate and Jon announced their separation back in 2009).

Now, I adored (adored!) Kate and Jon's children during the original show Jon & Kate Plus 8 (specifically the sextuplets — sorry, twins Cara and Mady. The toddlers were just too damn cute). Although Kate was/is a complete control freak, I honestly don't understand how you could have eight children without that organization. (For the record, this is not me defending Kate in general.) But once Jon and Kate's marriage deteriorated, I needed a serious break from the Gosselin family. And I guess TLC did too.

The premiere episode of Season 3 of Kate Plus 8, "New England Adventures," literally took no time in explaining what happened while the show was off the air or why it was back after four years. It just jumped back into the everyday lives of Kate and her children. They went on a summer vacation to Massachusetts and Maine and highlighted things like the kids getting their cell phone privileges revoked and breakdowns over choosing beds during their vacation — pretty standard family fare.

Although I honestly can't handle Kate's long hair (among many other things), her children are awe (Mady and Cara proved that a year ago). Of course, I have issues with the fact that Kate somehow keeps pushing her family into the reality TV limelight, but at least according to Season 3 of Kate Plus 8 so far, the kids seem pretty damn normal.