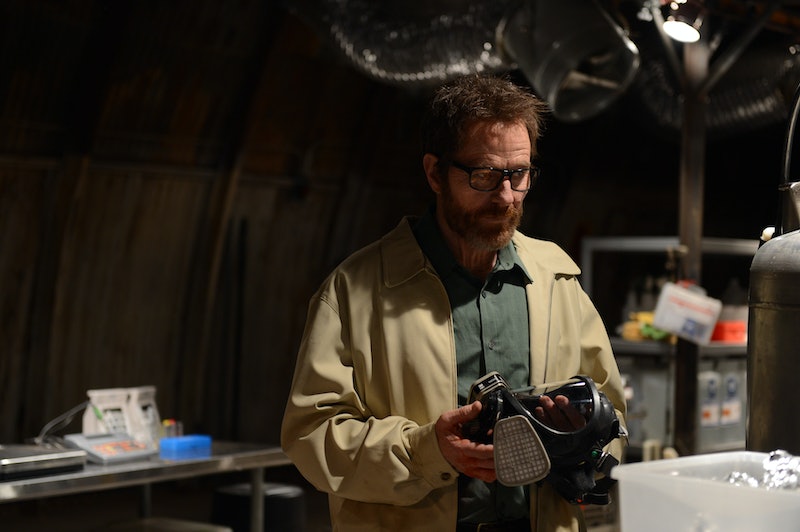 So (SPOILER ALERT, for the precious few who watched Sunday night's Homeland premiere instead of the Breaking Bad finale) Walter White is dead. After five-and-a-half seasons of watching the chemistry teacher make like the study of matter and grow (into an enterprising businessman), decay (into a murdering kingpin), and transform (into a vigilante), the man portrayed brilliantly by shocking Emmy loser Bryan Cranston met his inevitable end, satisfying the majority of Breaking Bad fans with his quiet descent into death. But after watching Walt ruin his loved ones' lives by lying, killing, and even poisoning young children, Walt's death — which occurred in the episode's final moments while he pet meth lab equipment with as much affection as he pet his own daughter, Holly — did seem more dignified than anticipated. In fact, as the screen faded to black and Vince Gilligan's name appeared on the screen, it was easy to wonder: Did Walt get off too easy?

Don't get me wrong: Breaking Bad's final episode was as satisfying as a plate of eggs and bacon. The neo-Nazis were killed, Lydia was poisoned by the ricin, Jesse actually lived, and Walt actually died. It might have seemed a conventional, predictable end to an incredibly unpredictable Season 5, but, after Breaking Bad's soul-destroying penultimate episode, the series needed to end not on a happy note, but at least a note that didn't lead us all to the medicine cabinet for a Prozac. And Walt's end seemed enough to placate both Walt lovers and haters — the former chemistry teacher met his maker, but he also met his maker heroically. But there is a bit of a problem with re-imagining Walt as a hero who would sacrifice himself for the former student he had previously sentenced to death — Walt's not a hero. He's a selfish, murdering, lying, prideful monster.

It was easy to be satisfied with Walt's new status during Breaking Bad's finale, though. Stacked up against the sociopathic Todd and the trigger-happy Jack, Walt seemed the lesser of the evils. (He really only killed bad guys, right? For the most part? Except for Jane? And everyone in those planes? Well, whatever. Details.) In fact, Jack and his gang of neo-Nazis were so good at being bad that you forgot how much, in previous seasons, you wished that Walt would end up coughing himself to a lonely death, or burning inside a barrel of acid. It wasn't long ago that we were hoping for the absolute worst for Walt, whether that meant he would die a painful death, or he would live a painful life with his loved ones dead. But, during the season finale, Walt died on his own terms.

He exacted revenge for Hank's death. He saw Skyler and Holly one last time. He saved Jesse. And he intimidated Gretchen and Elliott into delivering $9 million to Walt Jr., when he turned 18. While young Flynn certainly deserved the money to make up for the pain he's lived through, Walt didn't necessarily deserve to actually succeed in his efforts. And he didn't deserve to determine his expiration date, which he clearly had while planning his assault on the Jack's band of killers.

Still, this is admittedly a very thin reading of Breaking Bad's final episode. Because while Walt managed to be successful in his series-long goal (to provide for his family) and in determining how and when he would die (even if some might claim he would have walked away living had he not decided to shield Jesse from his own bullets), he walked away a detestable creature in the eyes of those who he claimed mattered to him most: his family. It was clear in two scenes: the first, his final encounter with Skyler, in which he finally admitted that his meth enterprise was not for Walt Jr., or for Holly, but for himself. ("I did it for me. I liked it. I was good at it. And I was really — I was alive.") And in Walt's final scene in Jack's meth lab, a moment which proved Walt actually cared not for his family, not for his children, and not for Jesse, but for his success in the empire business. Walt might have done a few good deeds prior to his death, but a man who, in his final moments, lovingly looks at equipment that led to the deaths of many innocent people is anything but a hero. Watching him hover pridefully and happily over the tools that tore apart his family made it clear: Walter White is, and always will be, a monster.