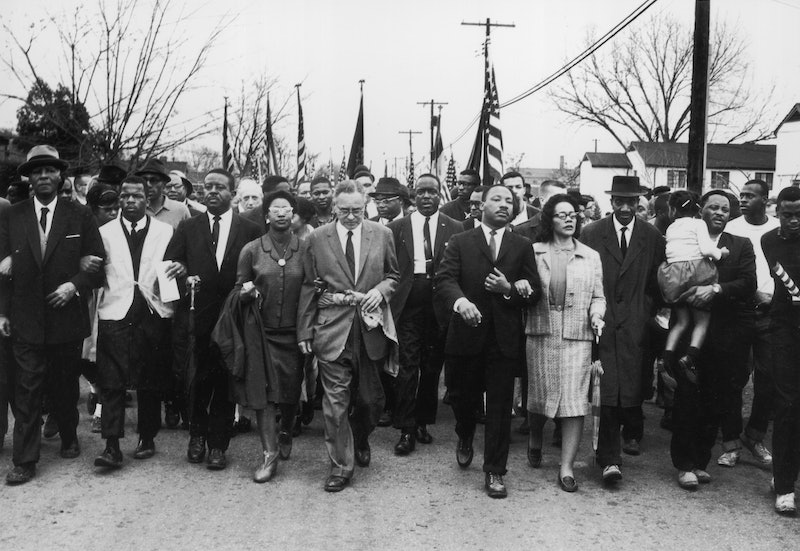 The White House is officially more inclusive than Hollywood. Well, not exactly. At the 2015 State of the Union, President Obama mentioned Selma. Okay, so he didn't mention Ava DuVernay film specifically. It is, after all, the 50th anniversary of the Civil Rights marches that lead to the Voting Rights Act in America. Here's the excerpt from his speech:

We may go at it in campaign season, but surely we can agree that the right to vote is sacred; that it’s being denied to too many; and that, on this 50th anniversary of the great march from Selma to Montgomery and the passage of the Voting Rights Act, we can come together, Democrats and Republicans, to make voting easier for every single American.

I'm sure that the team of speechwriters working on the State of the Union wrote this section before the Oscar nominations were revealed and almost completely shut the first Martin Luther King Jr. biopic on this important anniversary. However, the wording had to be intentional. They aren't unaware that this movie exists. Maybe I am still a little bitter about the Sony hack. Maybe I want to throw another win from Los Angeles to Washington, DC.

At the very least, can this work for publicity? Selma is not doing very well at the box office right now. Can a Presidential shoutout get more people in the theaters, please? One can only hope.

It's also important to mention, and both the speech and film bring this to light, that not that much has changed. The reason Obama brought up the Selma marches in his speech is that Americans are still struggling to get voting rights, something which should be simple. They have to be simple, if we want to call ourselves a free democracy. This is what makes Anthony Mackie's comments on Selma and race in America so hurtful — we were rooting for you, Falcon!

More like this
Every Single Big & Small Way You Can Fight For Abortion Rights
By Tess Garcia
5 Ways To Stand In Solidarity With Women In America From The UK
By Sophie McEvoy
How To Fight For Reproductive Rights, Based On How Much Time You Have
By Courtney Young
Police Shove 'Full House' Star Jodie Sweetin At An Abortion Rights Protest
By Radhika Menon
Get Even More From Bustle — Sign Up For The Newsletter