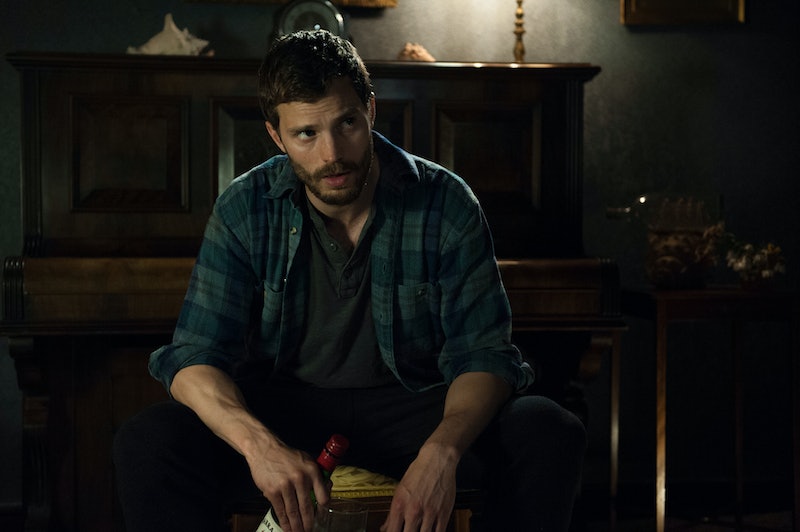 Season 2 of the BBC thriller just premiered on Netflix, so you can go ahead an binge all six episodes in one sitting. In case you're unfamiliar with The Fall, here's a quick crash course: Dornan plays serial killer Paul Spector, who has a thing for raven-haired businesswomen. Hot on his tail is Detective Superintendent Stella Gibson, played by Gillian Anderson (The X-Files, Hannibal). As Spector, Dornan is fabulously compelling: when he's not murdering young women, he's a devoted husband, father, and bereavement counselor. What drives such a man to kill? What does it take to catch a killer like him? When will Stella and Paul finally come face-to-face?

So forget all about Christian Grey. Here are six reasons why The Fall should be the first series you associate with Dornan, you know, before you go see 50 Shades. (And yes, I feel confident saying that without even having seen 50 Shades yet. That's how good The Fall is.)

1. He Doesn't Feel The Need To Incessantly Call Women "Baby"

Seriously, if I had a dollar for every time Christian called Ana "baby," I would be a rich, rich man.

Now, I'm not always a huge beard fan, but Dornan's facial hair in The Fall is just enough to make him look like an actual human being. Why you would take that gorgeous man and then wax him into the generic walking Ken doll up there is beyond me.

3. He Doesn't Have To Worry About Getting Murdered

Dornan told Details, "I fear I'll get murdered, like John Lennon, by one of those mad fans at the premiere, because a lot of people are very angry that I'm playing this character. And I'm a father now, and a husband. I don't want to die yet." Something tells me that's something he doesn't have to worry about while filming The Fall — nobody would dare mess with Paul Spector.

4. His Work Stands On Its Own Merits

Dornan doesn't have to talk anyone into watching The Fall. The series did well enough to be renewed for a second season, and has garnered glowing critical reviews both years it's been on the air.

Hey, I haven't seen the film, so maybe he's right. But I do have my doubts.

5. He Won't Be Pulling Any Feminine Products Out Of His Scene Partners

6. He Has Serious Chemistry With His Leading Lady

When co-stars Dornan and Johnson came onstage at the Golden Globes to present the award for Best Supporting Actress in a TV Series, Mini-Series, or TV Movie, BDSM fans the world over likely felt their stomachs drop at the conspicuous lack of chemistry on display. The future Christian and Ana didn't look at each other once and neither broke a smile, probably making people wonder if Anne Hathaway and James Franco wouldn't make for more compelling 50 Shades leads. Then again, they were standing in front of a room of some of the most accomplished actors in Hollywood, so maybe they were just nervous?

In contrast, Dornan barely shared any screen time with his co-headliner Gillian Anderson in Season 1 of The Fall, and yet their few scenes together (one when they pass in the hall of a police station and one when they're on the phone together) practically sizzled with the kind of tension that one would expect between Dornan and Johnson. Here's hoping that Globes display was just a fluke.