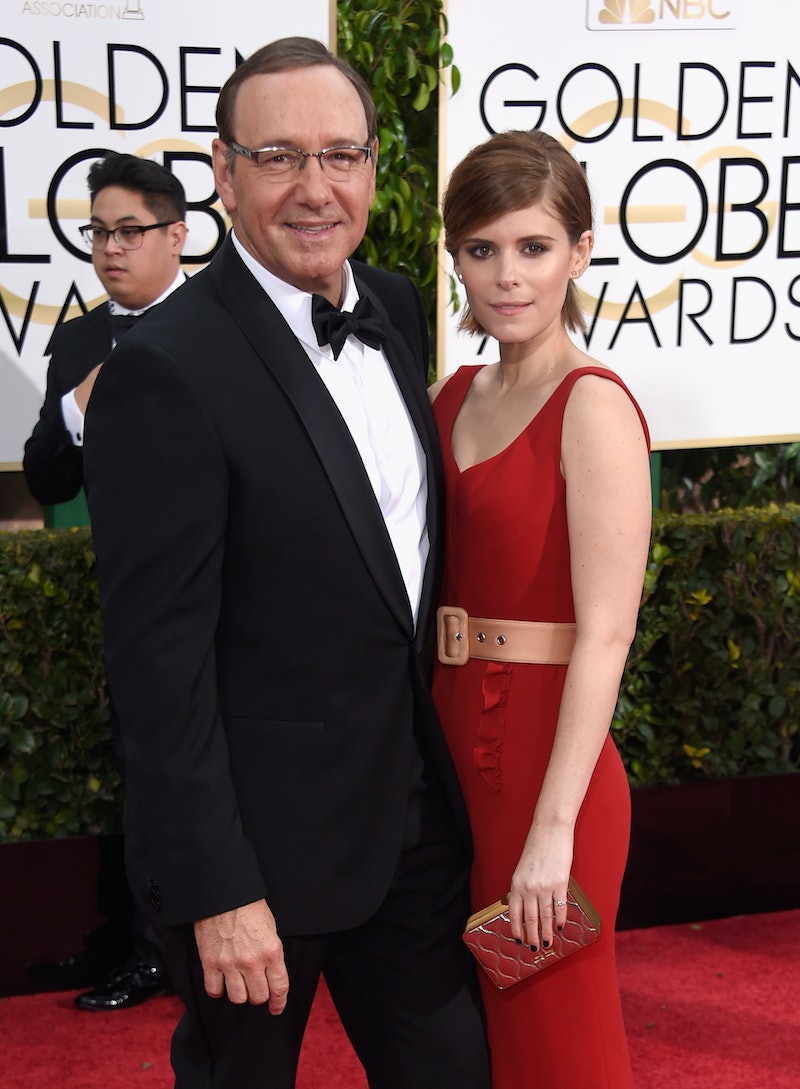 If you watched the Golden Globes two weeks ago, you probably noticed that Kevin Spacey and Kate Mara attended the ceremony together — as each other's dates. Yup, they sat together, walked the red carpet together and they sure looked the part of a bona fide couple, what with him in his tuxedo and sophisticated spectacles, and her in a classic red gown. No, they're not actually dating — they just came together as friends. Spacey brought another co-star as a date to the Emmys back in August, Ashleigh Banfield. Still, since they were quite a pair at the Globes, we've got to wonder — if they did that awards show, does that mean Spacey and Mara will attend the 2015 SAG Awards together?

Mum's the word so far, but it would make sense — they made great dates for each other at the Golden Globes, so why mess with perfection? Besides, it's nice to see the happy, real-life döppelgangers of Zoë Barnes and Frank Underwood chum around at one of the biggest award shows of the year. When you think about it, there are actually a lot of reasons they should pair up again for the SAG Awards — so here are a few to get the ball rolling.

They Have A Good Rapport

Did you see this video of them getting breathalyzed together? They joke about drinking tequila and their hours-in-advance pre-gaming — at one point Spacey even jokingly blocks Mara from view of the camera so she can blow into the breathalyzer in privacy. Basically, they seem like they're having fun and that they are fun — so, if they paired up for the SAGs, it would equal... well, more fun!

I don't know about you, but I don't care SPOILER ALERT who tries to throw who in front of a subway train; I love nothing better than a good co-star pairing, even a platonic one. Even though Frank x Zoe is about as dysfunctional as they come, why not stir the pot a little, and leave the door open for some House of Cards publicity?

Come On, They're Adorable

I mean look how flawless these two are on that carpet. They sure paint a pretty picture. Give the people what they want!

More like this
Anya Taylor-Joy Might Be Engaged To Her Musician Beau
By Jack Irvin and Sophie McEvoy
Eva Mendes Just Claimed Ryan Gosling’s “Ken” Underwear
By Rachel Mantock
At 28, Emma Thompson Was Already A Star — But Unhappy In Love, Actually
By Olivia-Anne Cleary
The 'Spiderhead' Movie Ending Is Nothing Like The Short Story It’s Based On
By Morgan Leigh Davies
Get Even More From Bustle — Sign Up For The Newsletter