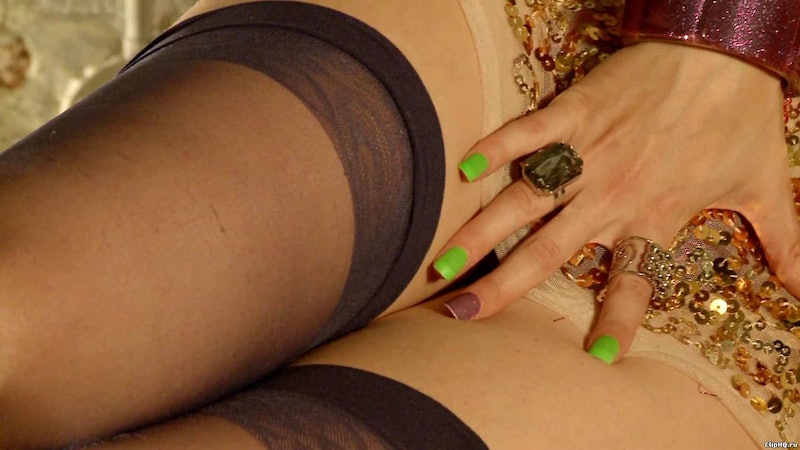 Female pubic hair is totally trending — but not in the most body-positive way. Even in 2015, showing a little bush will get you kicked off Instagram, as one Australian magazine found out after they posted a picture of two models sporting some bikini line flyaways. While below-the-belt grooming trends have changed shape (and length) over the years, female genital hair is still viewed as something that should never be, well, viewed. Fortunately, there have been times when bush ran wild and free, and we celebrated pubes as the natural, unremarkable form of body hair that they are.

In the 70's, they knew how to have a good time with bush. This is probably why one of my most inspirational pubic hair moments occurred while watching John Waters' 1972 film Pink Flamingos back in high school. When the filthy married "villains" of the film (Raymond and Connie Marble) get busy on screen, they sport pubic hair dyed to match their electric manes in bright blue and reddish orange. At the time, I had been shaving and waxing down to a hairless sheen to stay in line with the fetish scene cool kids. Seeing such an exciting technicolor twist on hirsute styling opened my eyes to what could be done with pubes. With any luck, we'll learn from this glorious, sexually open era, and the next time women's hair down there is trending, it will be a lot more celebratory and a little less punitive. In anticipation of that day, here are six great moments in pubic hair history:

In 1994, The Black Crowes released their third album with a cover lifted from a 1976 Penthouse issue. Walmart banned it (shocker) and the record company eventually had to create a "clean" version, which featured neatly shaved edges and no pubic hair in sight. The original image stands as one of the most patriotic examples of pubic hair pride. Who says you can't have love for your country and not your razor?

One chapter in Cameron Diaz's newly released book encourages women to keep it natural down there. While some thought she was against shaving, she clarified that of course women should feel free to groom as they see fit. Still, any Hollywood sex symbol not advocating for a full Brazilian wax is a welcome addition to balance the scales.

In the movie Pink Flamingos, Connie and Raymond Marble (played by Mink Stole and David Lochary) are vying for the title of "the filthiest people alive," and dye their pubes to match their hairdos. John Waters' groundbreaking black comedy made headlines for many other reasons, but the couple's artfully-styled public hair is definitely a bonus touch.

This is the first (and hopefully not last) song to champion luxurious labia fur. In it, Amanda Palmer sings about growing it "like a jungle" and "showing off her map of Tasmania" (just think about that land mass for a second, you'll get it). The accompanying pro-pube video is a romp through all kinds of vagina reveals in which flowers, Legos, a deck of cards, or glittery Easter egg grass take the place of actual hair.

American Apparel has been known for its boundary-pushing imagery for a while, but nobody expected them to come out with full bush mannequins and vagina t-shirts. Walking past their normally hairless window displays, shoppers and pedestrians were doing major double takes. It may look a little fake, but hey, at least the company is promoting an attainable body image for once.

When Sharon Stone flashes her crotch to a room of salivating detectives in Basic Instinct, she cemented her place as a sexual icon. It remains the most paused moment in the age of home video for good reason. While you can't see much, there is a hint of blonde fuzz, so it stands as a proud moment in pubic hair history.