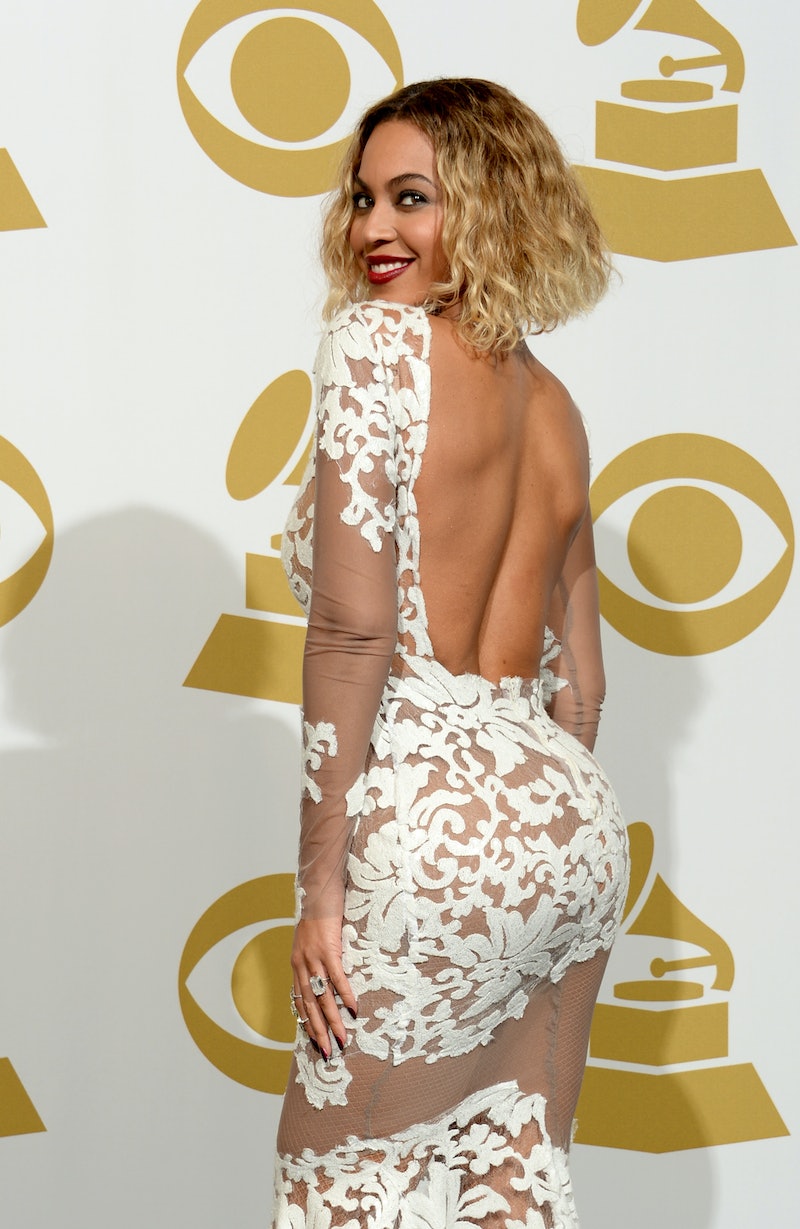 Since I've only been in Beyoncé's presence for planned events like concerts and fan meet-and-greets, I'm not exactly sure what happens when she enters a room unexpectedly. Is her arrival preceded by a ripple in the air, or a subtle shift in wind direction? Perhaps a mysterious tune starts playing out of nowhere like in those horror movies, but instead of a spine-chilling sensation, it gives off more of a creepy-sexy vibe — kind of like her Fifty Shades of Grey "Crazy in Love" rendition, maybe.

Either way, Beyoncé definitely needs some sort of Bey Bat Signal to alert others of her presence (or maybe she could actually use her Twitter, but I suppose that would be too ordinary for her). Anyway, you just never know when Queen Bey will appear out of thin air. That said, she absolutely has to get better about surprising people, though — particularly if she plans on interrupting anymore Parliament meetings. Which, yes, is exactly what happened recently: According to MTV, British Conservative Party’s chief whip Michael Gove's smartwatch began playing a Beyoncé song during a recent meeting of Parliament, and, even worse, he reportedly couldn't figure out how to turn the smartwatch off once it started playing.

Apparently, Gove got chewed up out by his boss for the incident, but I'm pretty sure some of the other members else did a little chair dance or subtly bobbed their heads to the beat while he fumbled around for the silence button. I mean, Beyoncé's the queen and all, so one of her songs just coming out of nowhere in the midst of such a formal setting had to make for a rather strange but delightful moment. Even British politicians have to love "Flawless"!

Believe it or not, though, surprising Beyoncé appearances like this aren't all that rare. Here are five other strange places Queen Bey surprised her fans, actually in person:

The Time She Surprised Fans at Walmart

The announcement probably went something like, "Attention Walmart shoppers. Beyoncé is in the building. No, seriously, she's on aisle 4 — and she's giving away gift cards."

The Time Bey Showed Up At a Karaoke Spot

Imagine being the poor soul who was on stage screeching through a ballad when Beyonce, Jay Z and Destiny's Child casually strolled in. That had to be the most embarrassing moment ever. But, of course, Bey performed one of her songs and made it all better.

Because this is the queen we're talking about, obviously this was no ordinary surprise. After one of her fans saw the singer out and about and approached her earlier that day, Bey had her assistant deliver concert tickets to his house.

Seeing Bey and Solange joyfully grooving onstage made for such an awesome sister moment.

The Time She Appeared on iTunes With An Entire Album

Um, who could forget what they were doing when Queen Bey dropped her surprise visual album weeks before Christmas 2013?

The lesson we should all take away, here? We must always keep an eye out for Beyoncé. There's no telling where she'll turn up next.