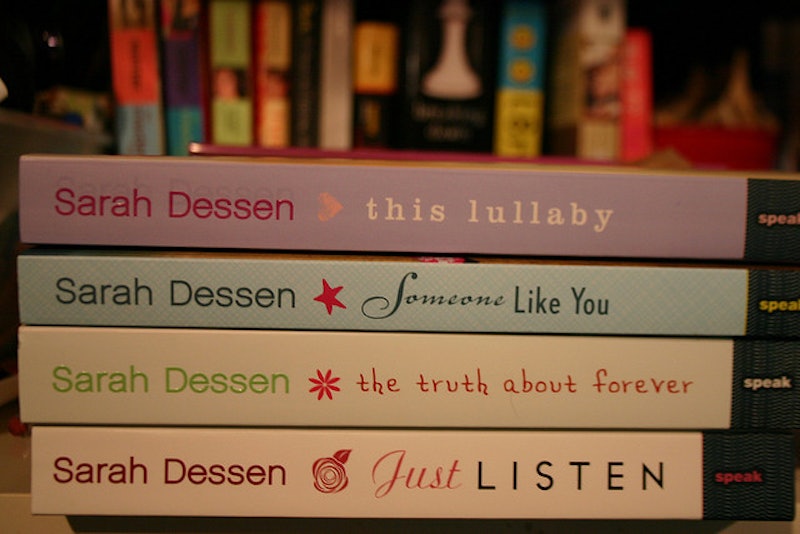 Of all the things that bug me about the "adults shouldn't read YA" argument, the biggest has to be the idea that you have to actually be in high school to feel like you're there. Author after author has proved this notion wrong, from J.K. Rowling to John Green, but perhaps none have done so more successfully — or as often — as Sarah Dessen. The novelist, responsible for This Lullaby, The Truth About Forever, and nine other beloved books, has been making the highs and lows of adolescence feel all too real to teens and adults alike since the mid-'90s, and she's not planning on stopping anytime soon; her 12th book, Saint Anything , is set for release in May.

And thank God for that, because as all Dessen fans know, it isn't truly the start of summer if you don't have a book by the author in your hand. Nearly all of her novels take place in beach towns or during the summer months, and even the ones that don't still have enough drama, romance, and satisfying conclusions to make for perfect vacation reads. Below, 11 more things hardcore Sarah Dessen fans know to be true:

Her Characters Always Have the Coolest Names

Dessen's books are known for their relatable familiarity, but her characters' names? That's another story. The author's protagonists tend to have pretty unusual monikers, from McLean Sweet to Remy Starr to a girl named Haven McPhail. Maybe it's because Dessen's own name is so common, or maybe it's just because she likes how the names sound, but whatever the reason, it's a fact that when you read a Sarah Dessen book, you're going to wish your own name was half as cool as the one of its narrator.

And The Love Interests Are Perfect

It doesn't matter if you like your guys dark and brooding, skinny and athletic, loud and vivacious — somewhere along the line, Dessen's had you covered. The author's a master at creating charming, sweet and generally perfect love interests that are bound to win over even the most cynical narrator — and, all too frequently, it also works on us readers.

You Want to Move to North Carolina

Specifically, the fictional town of Colby, home to plenty of beaches, boys, and protagonists of Sarah Dessen novels. Three of the author's books have been set in the little town (which is based on Emerald Isle, N.C.), and the familiarity hasn't made it seem any less magical.

Everything Important Happens in the Summer

A major breakup? Discovery of a new passion? A parent's remarriage? It all happens in the summertime, at least in the world of Sarah Dessen. The author's books tend to follow along the lines of Harry Potter (school year's ending, must be time for Voldemort!) and Buffy ("apocalypse in May? Right on schedule!"), not that that's a bad thing; the summer background realistically allows for the romances, jobs, and vacations Dessen loves and writes about so well.

You Know The Importance of Female Friendship

Not to ignore the great coed friendships that are often included in Dessen's books, but it's her novels' female bonds that resonate the most. Whether it's Hailey and Scarlett coping with grief in Someone Like You, or Emaline and Daisy figuring out their lives in The Moon and More, Dessen has always kept the friendships between girls front and center.

And That Her Books are Definitely Feminist

Just because many of the books are based around love stories doesn't mean they're not feminist. All of Dessen's protagonists are complex, contradictory heroines who care about way more than just if they get the guy. Birth control, abortion, and more are all fair game, and more often than not, the biggest theme of one of her books ends up being female independence.

But There's No Denying: Those Love Stories Are Great

You'd be hard-pressed to find an author who can capture the ecstasy and agony of falling in love as a teenager better than Dessen. Whether it's introducing a boy to your friends and hoping they'll get along, or determining if a fling is really just a fling, Dessen knows exactly what it's like and can write about it to cringeworthy, all-too-real perfection. Everyone has a different favorite Dessen romance (Remy + Dex forever!), because each one is just so good.

All Her Books Are Meant to Be Movies

For awhile, it was understandable that no one was adapting Dessen's books, because the words "teen movie" tended to elicit nothing but eye rolls. Now, though, that's totally changed, thanks to a little movie called The Fault in Our Stars, and there's no longer an excuse for why studios aren't flocking to bring Dessen's novels to the screen. And speaking of adaptations...

The one Dessen adaptation that did happen made the mistake of smushing two of her books together, so that the movie felt rushed, crowded, and lacking much-needed depth. Mandy Moore gave it her best, but neither her mid-'00s charm or Peter Gallagher's eyebrows was enough to save the movie from becoming a flop.

Dessen's Non-Novel Writing is Just as Great to Read

Even if you're only a casual reader of Dessen's Twitter feed and blog posts, you can't deny their greatness. The author uses social media to cheerily talk about everything from carpool issues to early-morning TV (don't get her started on Good Morning America...), and it's always a pleasure to read.

Yet while most of the topics Dessen discusses on social media are relatively light, she's shown that she's not afraid to delve into deeper issues on occasion. Through blog posts and Twitter, the writer's discussed the pain of her fertility issues, revealed a serious drug problem in high school, and has opened up the harsh truths of the writing process, such as when she displayed the 13 books she'd written and abandoned over the years. Dessen is always totally, hilariously honest about her life — just one more reason we love the author so.