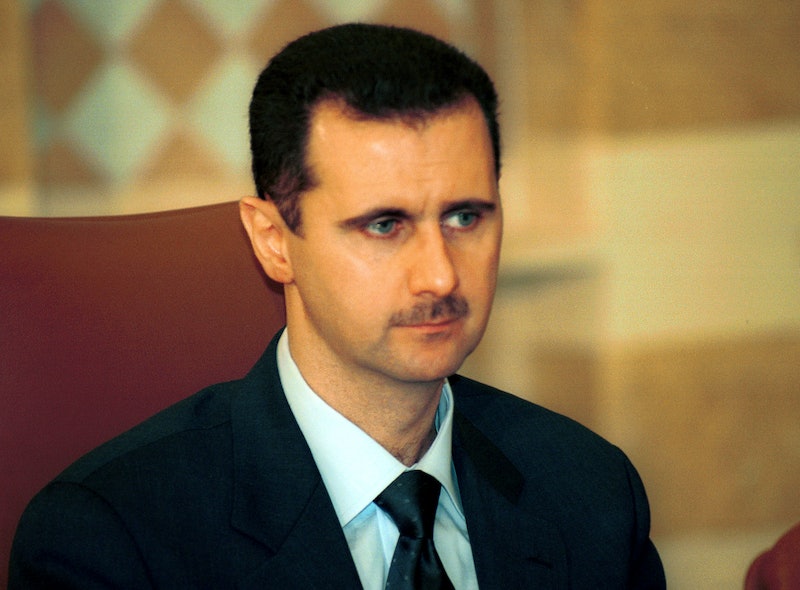 The first batch of chemical weapons inspectors tasked with rooting out Bashar al-Assad's stockpile arrived in Syria Tuesday. The group of 20 inspectors from the Organization for the Prohibition of Chemical Weapons crossed from Lebanon at the Masnaa crossing, en route to Damascus. They're set to replace an outgoing United Nations team that had been examining seven potential chemical attacks.

Armed with white UN vehicles, the team is slated to meet with Syrian officials and create plans to "impound, dismantle, remove or destroy" the country's chemical weapons, as outlined in a UN Security Council resolution passed last week. "In the first week they will be setting up operations and getting things primed for the hands-on, formal verification work next week," OPCW spokesman Michael Luhan told the LA Times Monday. Bashar al-Assad's government, he said, has been "businesslike and cooperative and efficient."

The Assad regime denies charges that it used chemical weapons against its citizens in a brutal civil war that has lasted more than two years, yet the government agreed to surrender its chemical arsenal under threat of a US military strike after an alleged Aug. 21 attack near Damascus. Videos of the alleged attack sparked widespread outrage: Secretary of State John Kerry cited the pain in the videos as the "clear reason that the world had banned entirely the use of chemical weapons." "As a father, I can't get the image out of my head, of a father who held up his dead child, wailing," he said.

The OPCW is trying hard to maintain an unbiased stance ahead of its investigation. "At this point, we have absolutely no reason to doubt the information provided by the Syrian regime," an official said.

It's not completely outside the realm of possibility that rebel groups are responsible for some or all of the chemical attacks. As we reported earlier, many of the groups are backed by or have fighters from powerful sources outside Syria. Just last week, many of the groups declared a symbolic allegiance to al-Qaeda.

On board with the new team from the OPCW are medics, along with scientists and technical specialists. The medical personnel is there just in case the team is accidentally exposed to chemical weapons while performing their task. (It's unlikely that Assad will bomb the experts just as rebels are giving him a chance to gain some international sympathy.)

First on the group's list is an operation to destroy equipment used to make sarin or VX nerve gases, and machines used to "pour the lethal material into bombs, shells and rockets." The way to do that is surprisingly low-tech: the crew will either remove some parts or pour concrete into machines to render them unusable.

The crew had to take a land route instead of flying into the Syrian capital because sources say the road from the Damascus airport to the city is overrun with fighting. The outgoing crew of UN investigators faced sniper fire while investigating the Aug. 21 attack.

Assad, meanwhile, has reiterated his pledge to cooperate with international inspectors. After all, it's part of Syria's history, he said, "to comply with every treaty we sign."

More like this
Read Dan Levy's Heartbreaking Message After The Club Q Shooting
By Stephanie Topacio Long
Iran Has Issued A Death Sentence Over Mahsa Amini Protests
By Catharina Cheung, Darshita Goyal and Maxine Harrison
The Best Chemical-Free Shampoos & Conditioners
By Marissa DeSantis
Kate Middleton Shares The Key To Building A "Happier Society" In A New Op-Ed
By Stephanie Topacio Long
Get Even More From Bustle — Sign Up For The Newsletter