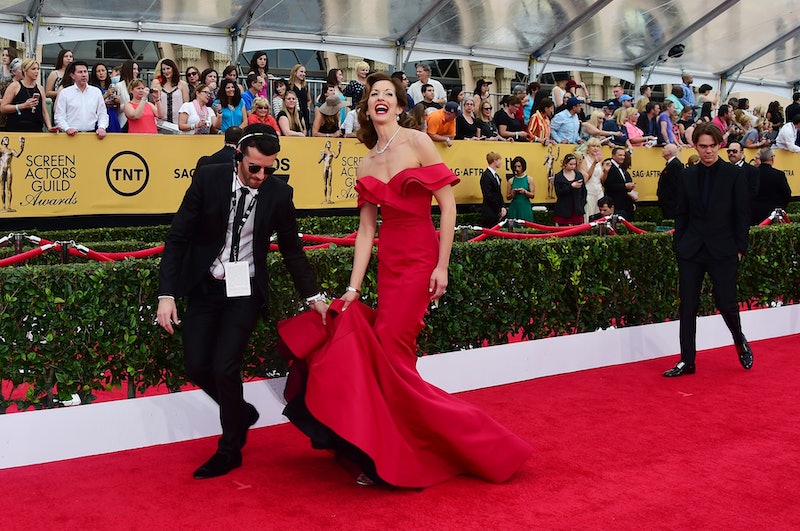 Award season is moving right along with Sunday's Screen Actors Guild Awards. But let's forget the actual awards for a moment, because what we really need to reward are the most awkward moments on the SAGs Red Carpet this year. Why else would one watch the red carpet if not for its biggest cringe-worthy moments? From mani-cams to selfie sticks, the red carpet is always rife ground for celebrity blunders. The reporters can ask intrusive questions that throw our usually prepared stars for a loop. The stars forget who they're wearing or trip on their way out of the limo. Someone's outfit could become a meme before the star is even allowed to explain their choices. Red carpet coverage proves that it's more about what celebrities do in formal dress than the dresses themselves. So, sorry Giuliana Rancic fans, but considering the E! coverage was hosted by Maria Menounos, Ross Mathews, and Kelly Osbourne this year, we knew that we could at least be thankful for one awkward evening.

So what were the most awkward moments leading up to Sunday's ceremony? Here are some that made us cringe.

1. Tatiana Maslany Shies Away From The Mani-Cam

Look, not all of us have time to get our hands did, and since she plays so many characters on Orphan Black, you can understand how she got a little busy.

2. Menounos Is Standing On A Fan To Keep Cool?

TMI! Also, she's fanning the actors. There's a lot of fanning going on at the SAG Awards. We get it, it's warm in California. Plus, with these plants, we're not sure if it feels like a greenhouse of if they're in an actual greenhouse.

He introduced the Downton Abbey nominee by saying she "still has that fresh award winner smell" — Ummmm, what?!

...and then admitting her faux pas on air. Isn't that the worst, when you do something so awkward that your awkward brain thinks over-explaining it will make it less awkward? (It will not.)

Then she flat-out refused to do the mani-cam and it was kind of the best.

6. Amanda Peet Is Only Asked About Her Husband

So much for the IRL Bechdel test...

7. Michael Keaton Is Put On The Spot About His Child's Attractiveness

That's every Dad's dream, right? Not only did Maria Menounos talk about how hot Keaton's son is, she pulled up Mindy Kaling's tweet about him and forced Michael Keaton to analyze it.

8. Sofia Vergara and Wreath Witherspoon Gush & Grab Each Other

Thus making half of the audience drool and Menounos uncomfortable. I guess we have to wait for the pair's Hot Pursuit for more of this apparently amazing "womance."

9. Jennifer Aniston Watching Herself On A Loop