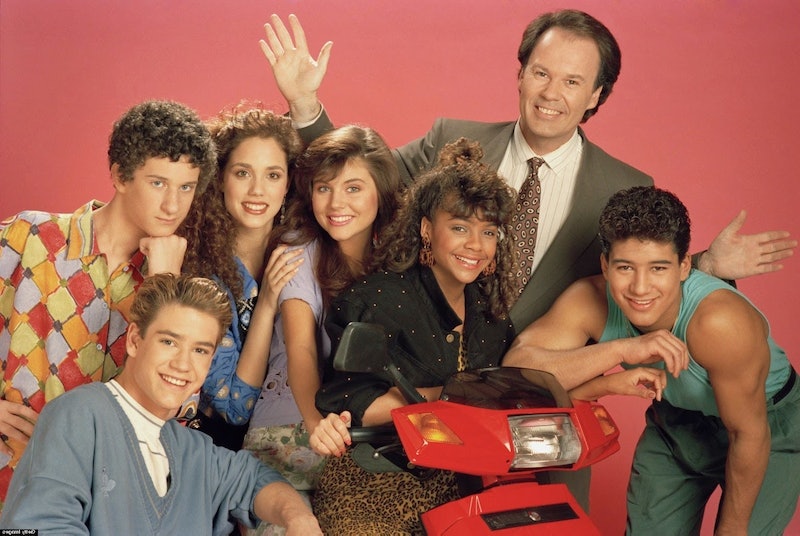 Saved by the Bell nostalgia is in full force thanks to Jimmy Fallon reuniting the Saved by the Bell cast on The Tonight Show on Feb. 4. After Lifetime's super unimpressive The Unauthorized Saved by the Bell Story and Dustin Diamond's arrest, Saved by the Bell fans were in desperate need of this reunion — and as expected, Fallon treated the source material with the reverence that the show deserved. But I wanted to go back to the basics and remember what Bayside High was really like back in the day.

In the late 1980s, the show Good Morning, Miss Bliss starred Hayley Mills as a teacher in Ind. who taught youngsters Zack, Lisa, Screech — and Mikey, Nikki, and Karen (uh, who?). Only after one season, the show drastically changed by moving the school location to Calif. and becoming the hipper Saved by the Bell with the suave blondie Zack as the lead. As Entertainment Weekly noted, Good Morning, Miss Bliss is considered Season 1 of Saved by the Bell on Netflix, but so much changed in concept (no Kelly, Slater, or Jessie?? No thanks) that I went to the first true episode of Saved by the Bell — "Dancing to the Max," which aired on Aug. 20, 1989. I own the first two seasons of Saved by the Bell on DVD and it starts with that correct incarnation, so I'm going back to (Bayside in) Cali.

Get your dancing shoes on and let's relive the first episode of Saved by the Bell.

The Intro Song Is Just As You Remember

Mark-Paul Gosselaar quoted the theme song at the beginning of Fallon's sketch and the amazing Saved by the Bell theme song was completely intact for "Dancing to the Max." Flying ice cream cone, sneaker, flamingo, headphones, fish, swirling spirals, and unrecognizable pink object all fly through the neon-colored air.

Max Was A Main Cast Member

After all of the kids were introduced in the opening credits — and before Dennis Haskins as Mr. Belding — Ed Alonzo was listed in the credits. Alonzo played Max, the magician owner of the popular restaurant hangout The Max. The Max lasted longer than Alonzo though since Max was only in two seasons. Oddly, he is actually the first person to speak during the first episode (he had just gotten a ... telegram?! Those were a thing in the '80s?) — and performs magic almost immediately.

Within Two Minutes, Mario Lopez Is Dancing — In Sweatpants

A.C. Slater does a double pirouette and a straddle jump with little to no effort. His racerback tank top and religious cross really accentuate his muscles and dance moves. Don't worry, Jessie's dance solo quickly follows seven minutes in and Mr. Belding shows his dance moves within nine minutes of the show.

She grew an inch taller since lunch! Maybe it was the gift bow in her hair that added the inch. Her height is the reason why she denies rando dude Danny's date request to compete in "Dance Party" with host Casey Kasem at The Max. She used the classic excuse, "Actually, no. I don't believe in dance contests."

The students are mega-talented musicians when they play "Minuet in G major." Slater plays the drums, Screech the piano, Jessie the flute, Lisa the violin, Kelly the cello — and Zack the trombone. They really start jamming out whenever the teacher leaves the room and only minutes after Jessie said she didn't believe in dance competitions, she is tearing up the music room floor. At this point in the episode, visions of Showgirls danced in my head.

Jessie Has The Sweetest Bedroom Decor

Posters ranging from The Cure, radiation kills, peace, and dance; ethnic masks; and framed jeans (?) all decorate her room. The showrunners wanted us to know that Jessie Spano was socially conscious right off the bat.

Casey Kasem makes two appearances in "Dancing to the Max" since he was the host of "Dance Party" that was going down at The Max. And he wore some colorful-ass sweaters in both scenes he was in. Is this Calif.? He looks like he'd be hot.

Mr. Belding went after his 15 minutes of fame with the appearance of Kasem — and Kasem wasn't having any of it. In his office, Mr. Belding showed off his twist dance moves (he had won the 1963 Chubby Checker Dance Off after all) and came to The Max ready to shake it. Kasem put a stop to that and although Mr. Belding may have resented it, he took a page out of Kasem's fashion book. Ohhhh the sweaters!

Screech Was As Ridiculous As You Recall

Now I don't like to think of Dustin Diamond getting bullied on set of Saved by the Bell (even if he is a hot mess now), but we don't know how true his claims about his treatment during the show have been. Of course, it would make sense that Diamond did not have the easiest time as Screech since he was the show's punching bag and was a complete "doofus." But he was still managed to be a baby bit endearing while being creepy.

Although all of the characters are quick to tell Screech to shut up, you can tell all of the kids still liked Screech — when no one was around. Slater comforted Screech about pining over Lisa in the locker room and I was blown away yet again by Lopez's arms. By my calculations, he was 15 in the first episode of Saved by the Bell (he was born in Oct. 1973) and he is more ripped than most adults I know! And you gotta check out his leg hair! Diamond didn't stand a chance.

Lisa Sprained Her Ankle In The Name Of Fashion

Yeah, we all knew Lisa had to use crutches to create the dance move "The Sprain," but I completely forgot how she had injured herself. Evidently, she kicked her TV when she was watching a Revlon commercial and discovered her nail polish had been discontinued. The nerve! Lisa's fashion sense was spot-on from the get-go with her rage over nail polish and her epic Flower Power sweater in the first scene.

And Kelly Thinks It's Appropriate To Wear Water Shoes to School

Kelly was the most coveted girl at Bayside (even though Lisa and Jessie were actually in pretty high demand too in the episode) with both Slater and Zack fighting over her. Although she was as wide-eyed and cute as I remembered, I did not recall those terrible water shoe-looking things (which appeared in not just one, but two! scenes). Lisa — you need to help your friend out. Wait — what am I talking about? All of them look insane.

Zack Isn't A Jerk — Well, Not a Complete One

I always was a Zack fan, even if he could be too sneaky and mean at times. His first major lie of the series was telling Kelly that he spent summers at dance camp in order to prove he could dance. But his bonding with Jessie (I was feeling some sparks fly) and asking her to be his partner (which showed that not all guys care about her height) seemed so genuinely sweet. Mark-Paul Gosselaar was also actually funny on some rare occasions (the jokes are rough, my friends). His best line of episode one? When Jessie said she won't go to the dance and Zack says, "You're not into some strange religion are you?"

And Jessie Is Kind Of The Best

I always wanted to be Kelly when I watched Saved by the Bell as a kid, but Jessie is clearly the best female character (if not just the best character) on the show. She mocks Kelly for being so completely helpless about making a decision between the two boys with her hair flip, she actually has some sweet dance moves, and her vulnerability was relatable. Plus, she's the smart one!

Can you believe it!? The three finalists in "Dance Party" were the six main characters — Slater, Kelly, Zack, Jessie, Screech, and Lisa. Lisa and Screech took home first place with the aforementioned "The Sprain" dance and their friends all cheered them on. As absurd as it all was, the stars were all so young and super cute. No wonder us children of the '70s and '80s loved this damn show.