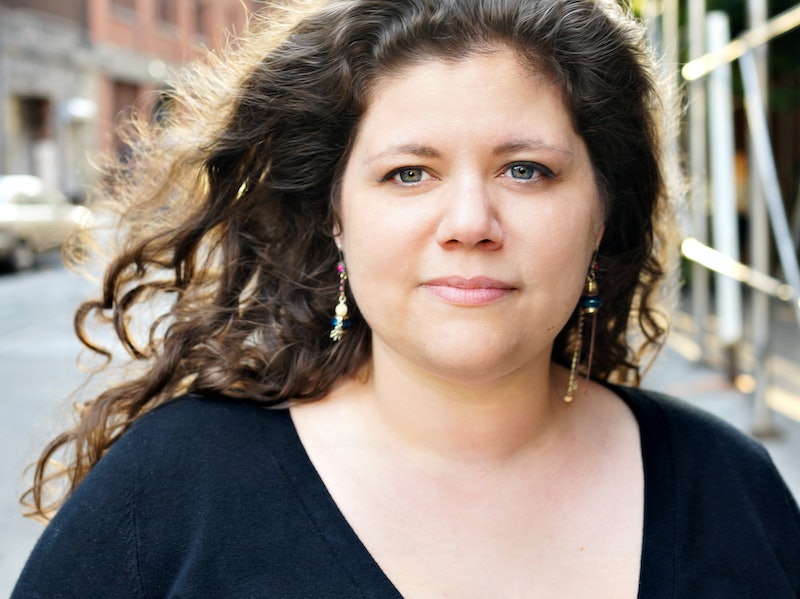 Do you remember the first time you fell in love? The first time you looked at someone — really looked at him — and realized how complex and mysterious and miraculous that face was? (The slightly crooked nose; the eyes set just a bit too far apart; that one crooked tooth...) How complex and mysterious and miraculous the person behind that face was? (The talent; the ambition; the brain; the kindness…)

I remember that moment: it came to me as I read Rainbow Rowell’s novel Fangirl. I’m only half-kidding right now. I’ve never fallen in love on that scale in real life, but I have fallen in love — like, majorly, dramatically — when reading: through characters, for characters; through prose, and for prose. Call it vicarious, but feelings can’t be justified or quantified or even qualified. And no one knows this better than Rainbow Rowell, whose four (soon to be five!) profoundly beautiful, heartbreaking, smart, and hilarious books all explore what it means to fall in love.

As it turns out, falling in love is tough, but it's also pretty magical. Rowell’s two accomplished YA books, Eleanor and Park and Fangirl , plus her two adult books, Landline and Attachments , are all humbly brilliant, and they all honestly relate the individual experience of love and relationships — not only for and with someone else, but for and with yourself.

Having a crush is seriously painful

Having a crush on someone is exciting. But it can also make you want to throw up. R.R. feels you on this, and she manages to make those violent waves of emotion worth turning into the kind of endearing, modern poetry she crafts in her simple and honest writing.

Take this pivotal moment in Eleanor and Park, in which the two titular teenagers — after silently reading comics together on the bus to school whilst silently imploding — hold hands for the very first time (after some innocent scarf manipulation).

Then he slid the silk and his fingers into her open palm. And Eleanor disintegrated … Like something had gone wrong beaming her onto the Starship Enterprise. If you’ve ever wondered what that feels like, it’s a lot like melting — but more violent. Even in a million different pieces, Eleanor could still feel Park holding her hand. Could still feel his thumb exploring her palm. She sat completely still because she didn’t have any other option … Maybe Park had paralyzed her with his ninja magic, his Vulcan handhold, and now he was going to eat her. That would be awesome.

Who but Rainbow Rowell could make teenaged masochism sound so lovable?

The eyebrows are the window treatments of the face

When reading R.R.’s books, you’ll begin to notice a curious phenomenon: eyebrows are mentioned frequently. They are mentioned lovingly; carefully; and compassionately.

Eyebrows, it turns out, are powerful creatures. Whether they’re furrowed, cocked, arched, or knit, eyebrows don’t merely emote: they can speak when the eyebrows’ owner is at a loss for words; when he’s absorbed in sketching out a comic; when he’s concentrating on Morrissey’s crooning baritone; when he’s awed by a particularly beautiful face.

For Georgie in Landline, her stoic husband Neal's eyebrows cue her into the emotions he rarely shares. "You could tell he was shocked because he raised his left eyebrow two millimeters. (Neal's face was like a flower blooming — you'd need time-lapse photography to really see it in action. But Georgie'd become such a student of his face, she could read most of the twitches.")

Actually, faces in general are amazing.

I mean, obviously. But R.R.’s potent, dynamic depictions of faces make my dumb statement ring true. Because R.R. knows that, sometimes, words can fail to express what you need to express. Sometimes, the only thing to do when you’re overcome by fear and love and awe is to look at what’s in front of you. Because what’s in front of you is really damn beautiful, and it's worth your affectionate gaze.

I think R.R.'s best descriptions of an especially lovable face are those of Nebraskan farm boy Levi, heroine Cath's ludicrously charming love interest in Fangirl. Cath is taken with Levi's chin in particular, because we all have our own unique turn-ons and they shall never be judged. Rather, they shall be indulged:

"His chin went soft sometimes when he smiled or when he was feigning surprise," Cath admires, "but it never quite mushed away. She was going to kiss him there someday, right at the edge of his jaw where his chin was most vulnerable."

It's enough to make you look at chins in a whole new amatory light.

Even if you’re not technically still a teenager, you’ll always be a teenager

In Attachments, the (adult) leading man and lady fall in love with each other before ever meeting or speaking. It's a charming throwback to childish schoolyard crushes, those blind attachments we formed before we learned how to speak to people we found attractive using the English language rather than stalker-y stares.

But when you're an adult, crushes — while not necessarily any less powerful than they were when you were fourteen — feel a little more special. A little rarer. A little more precious, even, like a hint of pure magic in an otherwise routinized world. That's how Lincoln feels about Beth, the object of his grownup affection:

Wanna fall in love? Read together!

A less intimidating/eye-contact-y way of discovering your OTP than those 36 infamous questions. Eleanor and Park’s epic love story begins when Eleanor peeks over Park’s shoulder on the bus to school to “eavesread” his comics. Without ever speaking, they make this co-reading thing a habit: they sit in silent tandem, absorbing Watchmen or Swamp Thing, no longer totally apart, but actually totally together. Soon, Park lends Eleanor books, which “come back smelling like perfume … like roses. A whole field of them.”

And then there’s that other epic co-reading scene in Fangirl, in which Cath spends the entire night reading The Outsiders aloud to Levi, after which those two crazy kids basically fall madly, if carefully, in love. See? Books are sexy!! I promise!!

Reading together is cute and fun, but there's nothing quite like that first kiss...

…which, for Cath and Levi, occurs after that fated night of reading together. “Nobody had ever kissed Cath like this before,” she realizes after being shook from her Outsiders stupor, only to be drawn back into another kind of stupor. “Levi’s kisses were all taking. Like he was drawing something out of her with soft little jabs of his chin.”

Kissing, R.R. teaches us, is not only fun, but it can also teach you a lot about the person on the other end of your mouth. Levi, for example, wants to draw the introspective Cath out of her interior world: he wants her to share, to be open, to not be so serious all the time.

R.R.'s heroines are the best heroines, because they're all sort of anti-heroines, by which I just mean that they're real people (okay, they're not really real, but they could be real!) You'll find chunks of yourself and people you know in each of these characters: in Cath, I see my own unwillingness to join the real world in favor of the world of books and art, and I also feel her homebody's pain when she leaves home for her first year of college. I feel protective over the bullied Eleanor, whose broken home has left her without the compassionate family she needs to feel secure in her body. I admire Beth's self-deprecating wit. And, through Georgie, I understand what it means to be a working mother, to love your husband and your children fiercely, but to miss the freedom of only needing to look after yourself.

I cried for these girls-becoming-women, and these women-who-still-feel-like-girls. I cheered when they discovered, or re-discovered, the beauty of being in love with another person, with themselves, and with their worlds. I fell in love with them all, and you will, too.