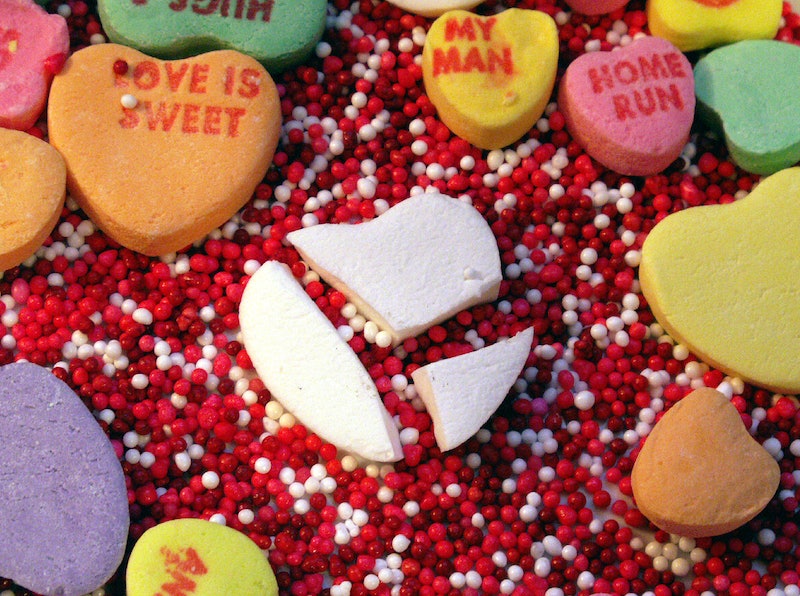 Valentine's Day may be a mere ten days away, but that doesn't mean couples everywhere are getting extra lovey-dovey with each other; in fact, a lot of them are probably getting ready to end it (V Day is one of the most breakupiest times of year, after all). But exactly how are we breaking up these days? Smartphone music and ringback tone app LISTEN teamed up with YouGov to find out — and while the results aren't exactly surprising, they might at least help you out if you're about to go through a breakup yourself.

LISTEN and YouGov surveyed 1,094 adults in the U.S. over the age of 18 online between December 23 and 29, 2014. I think perhaps the most interesting — and, in some ways, heartening — takeaway from the poll is the fact that the digital world, as pervasive as it is now, doesn't play as huge a part in how we break up with each other as you might think it does. Face-to-face contact and phone conversations still rule — so at least we haven't totally lost our human touch yet, right?

According to LISTEN and YouGov's poll, here's a snapshot of how Americans are breaking up in 2015:

1. We think breaking up face-to-face is best, but will go with a phone call if we have to.

Three out of four Americans said they'd deliver the news to their soon-to-be ex in person, although 28 percent also said they'd do it in a phone call. To be fair, there are circumstances in which a phone call is definitely better than face-to-face (when long-distance relationships end, for example — no matter which way you spin it, either traveling a great distance to see someone, or having them travel a great distance to see you, only for you to break up with them… is a little difficult to stomach). But hey, the good news is that fewer than one in five people would break up via text (don't do that. Seriously, don't), and only six percent would do it via social media.

2. We rehearse what we're going to say before we say it.

One in three Americans script their “We need to break up” speech in advance. This makes sense; it's always important to communicate clearly, but it's especially important to do so in heavy conversations. Women are more likely to script than men, by the way — the numbers come out to 44 percent vs. 31 percent.

About a quarter of Americans change their relationship status on Facebook after a breakup, and only 19 said they unfollow their exes on other forms of social media (Twitter, Instagram, and so on). This is somewhat interesting in light of a different YouGov survey from 2013: At the time, 43 percent of adults reported that changing their Facebook status was an important part of the breakup process.

4. We use music to help us cope with a breakup.

A third of Americans turn up their jams in an effort to get over a breakup. Women do so a little more frequently than men (38 percent, as opposed to 28); furthermore, age makes a difference, too: Although only 22 percent of adults 55 and over said they listen to music as a coping mechanism, a whopping 48 percent of Millennials stressed the importance of music.

5. We throw ourselves into our work while our hearts are healing.

I would imagine this coping method is sort of a way to distract ourselves from feeling awful in as productive a way as possible. About a third of adults between the ages of 34 and 55 bury themselves in their work after a breakup, while 42 percent of Millennials do the same thing.

6. When we call people to talk about it, we like to call women.

If you're the kind of person who needs to talk to someone immediately after a breakup, odds are you'll call a woman: 27 percent of those who call someone right after the breakup has happened ring a female friend, while only 10 percent said they would ring a male friend. Other popular options include calling your mom (27 percent) or a sibling (10 percent).