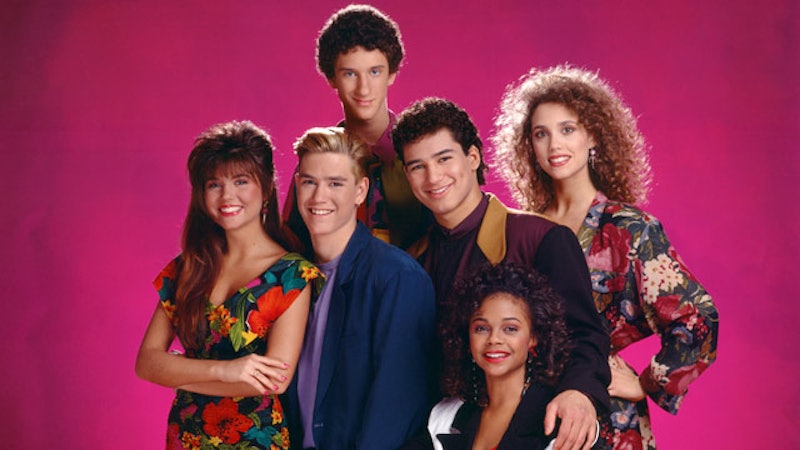 On Wednesday night, the Internet more or less exploded in bunches of neon delight when about 4/6th of the Saved by the Bell teens (and Mr. Belding) reunited on The Tonight Show Starring Jimmy Fallon. That's right: After what has long been a Fallon fantasy, the unthinkable has been pulled off.

But, wait, time out: although it seems that the Baysiders aged well, I seriously doubt that Zack, Kelly, Slater and the gang would really be so well off in 2015.

You know me. As both a realist and someone who requested a Saved By The Bell t-shirt for my 21st birthday (it's amazing, by the way), I have a feeling things would be less-than-great for Bayside High's alumni these days. In fact, "Zack Morris" (read: Mark-Paul Gosselaar) previously went on Jimmy Fallon's talk show to update us on Zack's life, including the little tidbit that him and Kelly headed to splitsville. (That's right, children of the '90s, love is dead. Deal with it.)

Anyway, based on that and, you know, the crushing reality we all deal with outside of a Saturday morning tween sitcom, here's my predictions of what the kids of Saved by the Bell would REALLY be like today. Watch the reunion below, and prepare to have your childhood ruined.

Zack went into acting, which ultimately contributed to the disintegration of his marriage with Kelly. Also, two words: Stacey Carosi. Things were mostly okay for a while, though, with long stints on NYPD Blue, Zack was a recognizable face in television.

His acting career has since melted, though. Despite his remarkably high SAT scores, Zack was a slacker at heart, and now is assistant manager at a Staples in Reseda.

He DID have a bit part in a Rogaine commercial, though; turns out all those years of intense bleaching and hairspray-intensive styling did some permanent damage, still evident by his receding hairline. But with enough treatment, he thinks he'll have it in control for the next Bayside reunion.

After Kelly's short-lived marriage to Zack she moved to Beverly Hills with Jeff, but due to Jeff's obvious issues with fidelity, that marriage also ended in divorce. She's made the most of her settlements, though, gone are the days where she couldn't afford to go to prom and had to slow dance with Zack in a sweater. No, for what's it's worth her unfailing good looks and cheerful persona has somehow earned her a cushy LA lifestyle.

It's not all sunshine and daisies for Kelly, though, you can clearly hear a cry for help Thursdays on E!, with her reality show Taking a Time Out With The Morris-Hunter Clan. There are far to many scenes where Kelly negotiates her teenage daughters (Tiffani and Amber, from her first and second marriages respectively) modeling contracts, drunk on Chardonnay at noon. "I used to be a model," she slurred in the most recent episode. "Shut UP, mom, nobody cares you that you were the most popular girl at Bayside High!" Tiffani shrills, cloaked in a fur vest, cigarette in hand.

Later down the line there's a Very Special Episode on narcotics.

Once Slater abandoned his veil of machismo, he was a lot better off for it. After earning a role as The Rat King in the New York City Ballet's 1996 production of The Nutcracker Suite (which inspired endless teasing from Zack, make no mistake) Slater became an unofficial Lord of the Dance. Although as he ages the roles become scarcer and scarcer, his career breathed in some new life after he posted the video "Wrestler Gets Outed as a Ballerina at the Max...and You Won't Believe What Happens Next," which clearly got reposted by Upworthy. He's grateful for the residuals from that video: every month he gets like, $200, because it's YouTube, and let's face it, that how much 30 million views are worth.

Jessie had some struggles in after graduation. Inspired by Gloria Steinem's undercover infiltration of Playboy Mansion, Jessie tried her hand at investigative journalism, deciding to explore Vegas's seedy underbelly. She got a bit caught up in her story — caffiene pills now looking like a baby's challenge — but ultimately came out on top with the best-selling 1995 book Showgirls: My Foray in Bedazzled Trash.

Jessie has less of a one-dimension caricature perspective on feminism since then. She's written articles about the dehumanization that sex workers face, had a TED talk about how finding out her ancestors owned slaves has made her better with interesectionality (in spite of some embarrassing attempts at retribution with Lisa) and her last personal essay on xoJane, It Happened to Me: I Had Sex With Kyle MacLachlan was a hit.

They haven't talked to him since Lisa had to file that restraining order.

Lisa actually did pretty well for herself, becoming a fairly successful fashion designer for tweens and teens. For a long time you could see her designs at Delia's which has ... since filed bankruptcy. But hey, you could also catch her clothes at Wet Seal which ... likewise just went the ways of Delia's. Well, at least she had a small stock in Bonne Bell, which ... actually, never mind, things are pretty dark right now.

She's no quitter, though. Lisa's set up a small Etsy shop where she takes characters from '90s TV shows, puts them in heart-shaped, glitter filled cases of cabochon, and sells them as necklaces for $11.99. Last time Zack accidentally Facetimed her he seemed skeptical, but Lisa assured him that the '90s are so on trend right now.