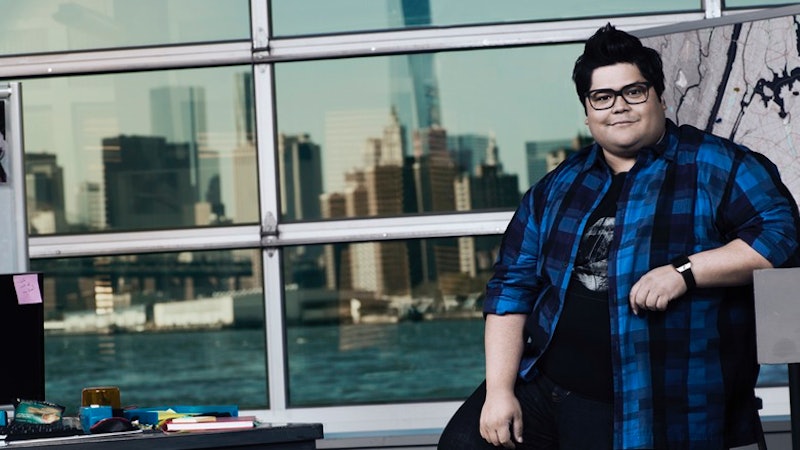 With each new episode I watch, I become less and less confident in being able to guess who the Eye Candy killer is. Each new piece of evidence tucked into an episode seems to steer me away from my current suspicions, which is why I think I should just stick with my initial thought of who the killer is and suspect Lindy's coworker and tech genius friend George. I know, random choice, but I've got a highly convincing argument behind why I think George is the Eye Candy killer, so bear with me as we go on this journey together.

When you think of George's character, you might think funny, sweet, innocent, smart, and Lindy's go-to tech guy. You probably don't think killer, stalker, psychopath, did I mention KILLER? But it's always the nicest ones who turn out to be the crazy killers that stalk you via dating apps on your phone (at least on TV), right? When I spoke with Harvey Guillen, who plays George, he told me that any one of the characters could be the killer... Could he BE anymore obvious? Fine, I'm reading into that a little too much, but I do have some solid evidence that George is the killer on the show.

"They're gonna catch you one day," he said to Lindy in Episode 1. ARE THEY, GEORGE? Or are they going to catch you? Look, I know Lindy is really good with a computer, but George might be better. And if anyone is going to hack up Lindy's life (literally and figuratively) it's going to be George... or are we supposed to believe this show has three computer geniuses?

George was at the party when Lindy was drugged, he is aware of all the screwed up stuff going on in her life, and he was even there when Peter was killed (the guy with the cell phone in his mouth). Although, that last one would make it slightly difficult for George to pick Lindy up in front of the club — maybe he is working with someone to pull off the crimes?

Guillen told me in our interview that the cast didn't know who the killer was throughout the filming process either, which could be why George seems so nice right now. "We should never be led to believe someone could be the killer, because when they’re not in killer mode, they’re just a regular person," he said. Right now, George is the guy you like, the guy that you'd never expect to be a brutal murderer. Unless Eye Candy is going to shock us with an unknown character, George is probably the most unlikely killer now, which really makes him the most probably killer. After all, what's a good thriller without a twist?