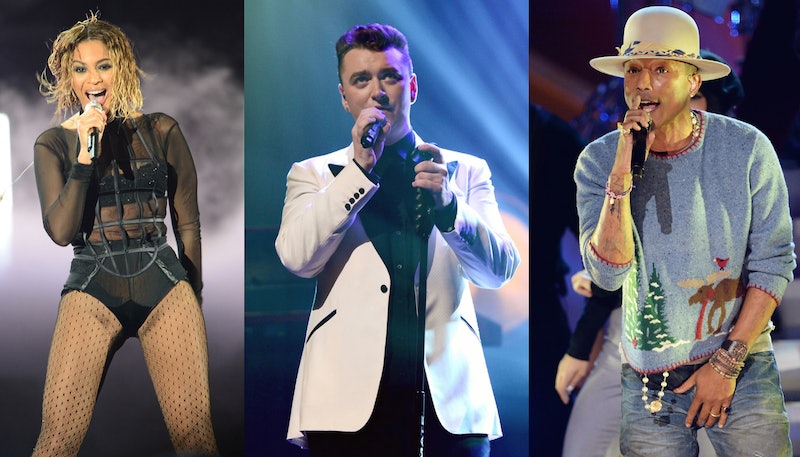 You'd think that opening the Grammys is the best it gets, right? Well, if you're Beyoncé, the bar repeatedly rises. Last year, she set the stage when she performed with Jay Z, yet she continues to be flawless and surpass her own greatness. Recently Beyoncé made music history by earning more Grammy nominations than any other woman. With more than 50 noms, she surpassed Dolly Parton's record. And the news gets better—not only is she up for six awards, but Beyoncé performing again at this year's show.

While being nominated for so many awards is AMAZING, she's not the only one to achieve this feat. Sam Smith and Pharrell Williams scored a half-dozen nominations each in 2015. So who will come out on top? Will it be the soulful newcomer (aka Smith) or the veteran who makes everybody "happy"? Oh, and what about Bey? Ugh, it's a headache just thinking about it. It's the battle of Beyoncé vs. Sam Smith vs. Pharrell Williams.

To try and sort things out, I've decided to predict who will win the most awards out of this trio. Even though we have to wait until Sunday night to know who the real winner is, it's a perfect way to pass the time 'til then.

I'm extremely excited that Smith is up for so many awards! With such an epic voice, he definitely deserves it. As a refresher, here are his categories:

Why? Here's what I think will happen. I think he could take the award for either Record of the Year or Song of the Year, but not both! He's up against "All About That Bass" and T. Swift in both categories, so who knows how that will go. I also think he deserves Best New Artist, especially compared to his competition. "Stay With Me" was unlike any other ballad this year and definitely deserves the recognition.

Oh, Pharrell! You never age, and neither does your talent. Literally everyone — from Oprah to my dad to school children— was obsessed with "Happy," so the nominations are unsurprising. Here are his categories:

From my understanding, the other two nominations that Pharrell scored are as a producer for two other nominees for Album of the Year (Beyoncé's Beyoncé and Ed Sheeran's X).

Why? Well, technically he has a 50/50 chance of winning the Album of the Year category. Either he takes the title himself, or an artist that he produced for could earn the title. So his odds look pretty great! As for his other wins, I think "Happy" has potential to earn at least one award.

Last, but certainly not least —Queen Bey. Let's recap all of her nominations:

Why? Because she deserves all of them, but who knows, maybe they made a mistake when deciding. She may not take home all six, but what other album would be worthy of Album of the Year besides the one that broke the Internet? In the words of Bey herself: "Bow down, bitches."

So there you have it! I'm betting on Beyoncé to take home the most trophies. But the good news is that all three are performing at the Grammys! So in the end, they're all winners, right?