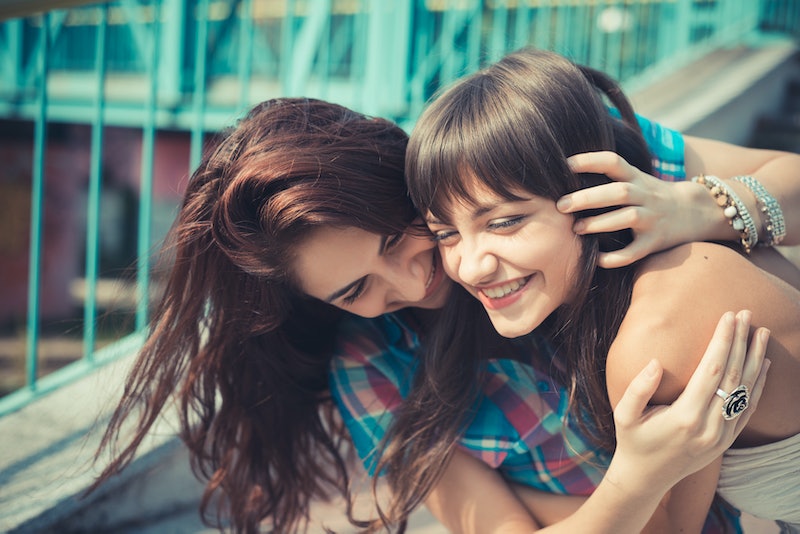 It can be especially difficult to see your best friend feel down on herself. After all, to you, she's the most beautiful woman in the world. How could she think she's fat, ugly, or unloveable? Well, let's turn that question around: how could you ever think that about yourself?

Sometimes, it's easier for us to see our friends more clearly than we see ourselves: We know they're gorgeous and inherently lovable (and don't you dare try to tell us otherwise), but when it comes to our own bodies, we're not always so sure. We know our best friends love us, but because physical attraction is not important in platonic friendships, any kind words they say about our appearance can feel less valid than, say, a romantic partner's compliments. Our best friends have to love us and think we're gorgeous, right?

But, in fact, a best friend can see you more clearly than almost anyone in the world. She thinks you're beautiful because YOU REALLY ARE, inside and out, and it's why she wants to be your best friend. That's why, as friends, we're better positioned to help each other have a more positive body image than pretty much anyone else. Best friendships are built on trust and mutual admiration — so who better to help you feel more at ease with yourself than her?

Here are seven ways my best friend and I have learned to help each other cultivate more positive body image. Like anything that involves overcoming oppressive societal structures deeply entrenched in history, media, and all that other bullshit, there's no one panacea. But it's worth trying to overcome the bullshit anyway: it is every human's right to feel at ease in their own body.

1. Compliment Each Other On Things Besides Clothes

Don't get me wrong, compliments about clothing are awesome too — but your clothes aren't an innate trait.

We all have moments when we see the inner and outer beauty of our friends shine through. Recently, for me, this happened when I was out to dinner with my best friend. Her hair was braided to the side, and she was wearing a black, off-the-shoulder top; a different look than usual for her. Sure, her outfit was great, but it was something else — she was glowing with an adult kind of beauty that was just radiating. She looked less like a "girl" and more like a woman coming into her own than I'd ever seen before. As I was complimenting her in my head, I realized, duh, maybe I should TELL her.

When I did, she almost started crying. "That means so much to me," she said. "I've been feeling terrible about myself and my weight lately. We should tell each other we're beautiful more often. We're always depending on hearing it from guys — but we should make a point of hearing it from each other."

She couldn't have been more right.

2. Help Each Other Overcome A Wardrobe Fear

Everyone has their mental shopping-blocks. For my friend, it is buying new bras. Because she has an ample bust, she often feels self-concious when she goes bra shopping. When she confided in me that she'd been putting off bra shopping for a couple of years, I offered to go with her.

I helped her shop, gave her advice on each option in the dressing room, complimented her, and made sure she treated herself to both some practical and sexy options. It felt great to help her out, and the next time I need help pushing myself to buy something nice (that's my block, I have trouble treating myself to clothes) I'm going to give her a call and ask for help.

3. Talk To Her About Your Body Image Ups And Downs

So much of what's destructive about body negativity is that it becomes an inner monologue. As you probably know, depression is sometimes said to be anger turned inwards, and negative body image is not so different — it is hatred we direct at ourselves.

I believe this is why many women Fat Talk (aka complain to friends about how they're feeling fat that day). Yes, perhaps we Fat Talk in hopes of reassurance that we aren't indeed overweight, but mostly, I think it's reflective of a real need women have to turn a painful inner monologue into a healing dialogue with friends.

How to do it: Next time you're feeling down about your body and find yourself with a friend, try telling her exactly how you're feeling. That doesn't just mean saying "I'm feeling so fat, I look terrible." It means really being honest about how you're feeling AND talking with her about where you think those feelings might be coming from.

For example, I might say, "I've been feeling really bad about how I look lately, and it's hard, because I'm wondering if it's just because I'm going through this breakup, and nobody is telling me I'm pretty anymore. I don't want to depend on someone else for that, but it's hard not to start criticizing myself more now. Does that ever happen to you when you're single?"

By opening up a conversation with your friend — rather than merely trading insults about yourselves in solidarity — you verbalize your fears, and take a little power away from the Body Police.

4. Have An Art Night

Remember how we used to make collages in middle school? Well, it's still really fun. I suggest a night of cutting up women's magazines, and making some of those potentially self-esteem busting images into works of feminist protest art. You can also paint, or, if you're shy about your artistic skills, try an adult coloring book.

The point is, art is therapeutic, and is often used with eating disorder patients to help them express how they feel about their bodies, and the representations of it. Try having an art night with your friend and bringing up how you've been feeling about your overall self-image lately. You'll be amazed how much easier it is to be honest and open when your hands are occupied.

5. Learn About Your Cycle — Together

This might seem like a weird one, but I discovered it with my friend the other day and it worked wonders. She was feeling emotional, overwhelemed — and, you guessed it — fat. She was also about to get her period.

We ended up reading Bustle's awesome article (sorry, but it is) about exactly how your cycle affects you week to week. I was amazed, but not surprised, to see how learning more about her body made my friend feel so much better about it.

All too often, women have to mostly push aside how their cycle and hormones might be affecting their emotional and physical state. But like it or not, these things can affect the way we feel in our own bodies, and we should understand what to expect, especially if we're not on hormonal birth control. By helping your friend learn about her cycle, (or at least emailing her an article or two), you'll be empowering her to regain a sense of control over what she might expect week to week.

So much of body image insecurity is about feeling disconnected from your body and viewing it as the enemy — so do your part to help each other reconnect to it. Which brings me too...

7. Help Each Other Get To The Root Of Insecurities

Sometimes, it is so painfully obvious to us that our friend is beautiful that we have a hard time listening to her express her insecurities. We might be tempted to respond to Fat Talk with comments like "You're crazy!" or "Shut up! You're so skinny!"

While that's a nice impulse, try to refrain from shutting down or disqualifying your friend's emotions. While her negative feelings are certainly not the reality you see before you, she isn't "crazy" for having bad feelings, and she most certainly should not shut up about it.

How to do it: Let your friend vent, and then try saying something about how listening to her talk smack about herself makes you feel.

You might say something like "I hear you, but it's hard for me to listen to you talk about yourself like that, because you're so beautiful. Like, I want you to feel healthy, but to me, you just don't need to lose any weight. I do get how you're feeling, though. I was just feeling really crappy the other day, and I felt like every girl I saw was so much prettier than me. But I was also having a horrible day in general. Why do you think you're feeling like this right now? I know you were saying stuff's been really stressful at work, do you think that could have anything to do with it?"

By using her comments as a jumping off point for a real conversation about her life — rather than trying to simply shut down her insecurities — you'll be giving her the permission she needs to talk about her feelings in a deeper way with you.

And that, among so many other things, is what best friends are for, after all. But you knew that already.