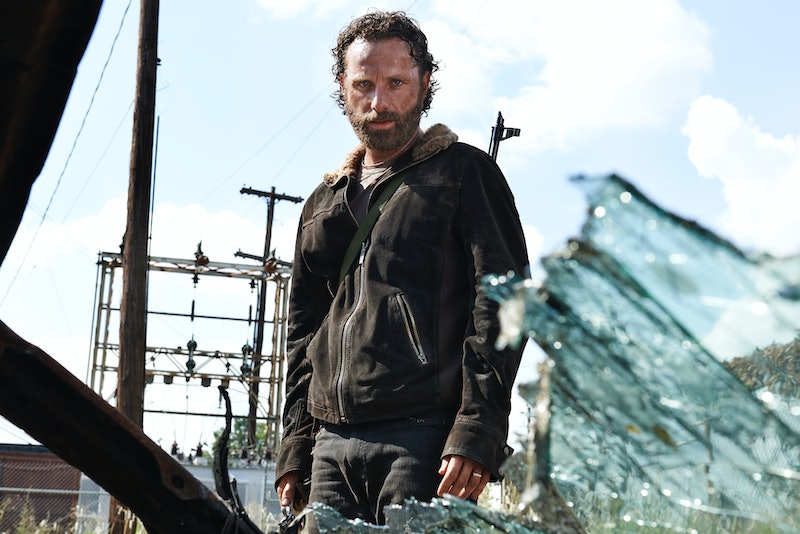 The Walking Dead is returning from its mid-season break and it's time to start introducing some new characters. The biggest name getting tossed around by fans is Aaron, who is a recruiter for the Alexandria Safe-Zone so it would make sense that we'd see him first. However, what if we meet Peter Anderson on The Walking Dead before Aaron? He is the head doctor at the Alexandria Safe-Zone, which the AMC series is speeding towards at record pace. A few new actors have been cast for the second half of The Walking Dead's fifth season. Ross Marquand is rumored to be playing Aaron. However, Michael Traynor was cast last fall, so it's likely that we'll see his equally mysterious character first. Could it be Pete?

This Pete is not to be confused with Pete Dolgen, played by Enver Gjokaj who is currently mixing it up as Agent Daniel Sousa on Marvel's Agent Carter. That Pete was killed by The Governor, so we definitely won't be seeing him again.

It seems likely that Alexandria Safe-Zone is one of the ways that the Aaron could be introduced. He would be the first gay male character on the series, and the producers have hinted that a character like him would be introduced this season. Basically, his job at the Safe-Zone is to find good people. Obviously Rick, Michonne, Daryl and the others are the best people and hopefully Aaron will be able to see this! However, Pete is in Alexandria too.

First of all, the group isn't headed straight to Alexandria. In the two-minute preview of this Sunday's mid-season premiere, we learned that Rick Grimes is leading the group to Richmond, Virginia. There is a settlement there that sounds an awfully lot like the Alexandria Safe-Zone, and it's where Noah's family has taken refuge. The group decides to travel with him to honor Beth and hope for a more permanent future arrangement. However, this isn't the Safe-Zone just yet. Richmond is a little over a hundred miles from Alexandria. Unless Aaron has a car, I doubt he's doing recruiting from that far out of town.

Could Pete be the doctor at this Richmond facility, and that's how we meet him? The need for medical attention would speed up the group's application process to any type of settlement, and I doubt that Carol has fully recovered just yet. I tend to stress logistics a lot with my Walking Dead theories, and it usually works in my favor. Beth was not all that far away, and Aaron cannot be too close. If you're looking for the next big comic character to join the show, I would cast my vote for Pete.

Here's a leap: What if in this version of the story, Peter follows the group from Grady Memorial Hospital? We saw that Dr. Edwards was willing to off other doctors to keep his comfortable "job" at the hospital. What if Pete was a ward or a cop, biding his time and hiding his skills, and later decided that Rick Grimes and Company were the way to go? I'm still shocked, to be honest, that nobody from Grady decided to leave Dawn's tyranny with Rick and the others. In the comics, Pete is somewhat of an antagonist, and I would expect his entrance to be every bit as mysterious as he is.