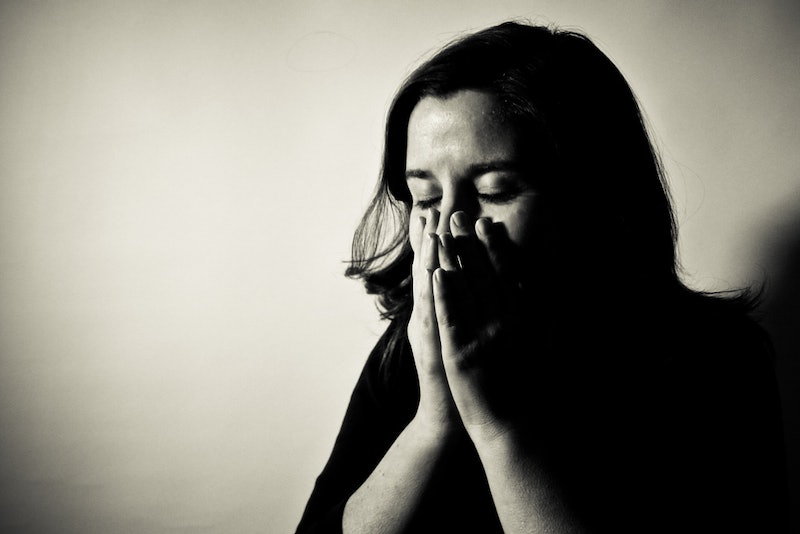 Bad news if you're in your 20s or 30s, earning under $50,000 a year, a woman, a parent, or some or all of the above: You're in the ranks of the most stressed out people in America. The American Psychological Association just released the results of their annual Stress in America survey, and folks who fall under one or more of those four categories have been statistically shown to have the highest stress levels in the country. I think I speak for all of us when I say: Ouch.

The good news is that stress levels as a whole are down: In the years since the APA started conducted the survey, they've dropped to 4.9 on average, from 6.2 in 2007. But as is often the case, the general trend doesn't hold true for all demographics. Why is that? A lot of reasons, but it'll probably surprise no one that money is a big factor. For the curious, the survey was conducted online by Harris Poll on behalf of the APA; 3,068 adults age 18 and older participated, with their answers being recorded between August 4 and 29 of 2014.

Before we dive into this whole thing, I think it's important to note that stress is not a contest. Just because people who fit these specific categories were recorded as feeling the highest levels of stress doesn't mean that no one else in any of the other demographics aren't dealing with stress either; it doesn't mean that anyone is trying to tell you your stress doesn't matter if you're not in one of these four categories; and it doesn't mean that everyone who does fall into one or more of these four categories is sitting there chanting, “I'm more stressed than yooooooooooou!” in an obnoxious, sing-song-y voice. We all feel stressed at times, and it always sucks for whoever is dealing with it. This is not a pity party.

No, Dawson. None of that, thank you.

Anyhoo, with all that in mind, let's take a closer look what's causing Millennials, low income households, women, and parents to feel so stressed out:

On a scale of one to 10, Millennials described their overall stress level as being at a 5.5; furthermore, at 36 percent, they were also the most likely generation to say that their stress level rose over the past year. And what are the sources of those stress levels? There are a lot of them, but one of the biggies is money: Fully three-quarters of Millennials described their financial situation as being one of the things that weight down on them the most. On a 10-point scale indicating how financially secure they felt, with one being not at all secure and 10 being completely secure, Millennials averaged out at 4.8 — below the score for all average adults, which came in at 5.5.

Interestingly, another recent study linked student loan debt to poor mental health. According to this one, which was conducted by the University of South Carolina, there's a direct link between stress, anxiety, hopelessness, and occasionally depression and the amount of student loan debt a person has; generally, the higher the debt, the more likely the student or former student is to suffer from poor mental health. Obviously this is not at all surprising — but it's likely an important element of why so many Millennials feel so stressed out in general, and about money in particular.

Speaking of money, let's chat about the wealth gap, shall we? It's true that money may not buy happiness — but it will usually buy peace of mind. Accordingly, there's a growing division between the stress level of lower income households and higher income ones: Those making less than $50,000 a year pegged their stress level at 5.2, while those making $50,000 or more rated themselves a 4.7. This is especially notable in light of the fact that in 2007, both lower income and higher income households ranked their stress level at 6.2. I suppose the good news, at least, is that 5.2 is a full point lower than the 6.2 figure from 2007 — even if it's not as low as 4.7.

In what is perhaps the least surprising, yet most awful piece of information to come out of the survey, we have this: Women feel significantly more stressed than men do. Their stress levels are both higher in general 5.0, compared with 4.3 for men — and with regards to money (surprise!). 30 percent of women reported feeling stressed about money all the time; for men, the figure was only 21 percent. I'm 99 percent positive one of the primary reasons for this difference is the gender wage gap, but maybe that's just me. I also suspect that things like how frequently women are harassed both online and in real life and the efforts being made to limit reproductive rights probably have something to do with women's high stress level overall.

Parents with kids under the age of 18, too, suffer from high levels of stress: They're at a 5.7 on a scale of 1 to 10, the highest of the bunch. Additionally, 34 percent of parents said their stress level has mounted over the past year, with — of course — money being a huge reason why. The cost of living has skyrocketed in recent years, but wages haven't followed suit; and when you've got not only yourselves, but also a wee one to clothe, feed, educated, play with, care for, and look to the future about? Let's just say that parents are definitely feeling the pinch. They rate themselves at a 5 on the one-to-10 scale of how financially secure they feel, which is about a half point lower than the average for all adults; furthermore, 58 percent say that paying for essentials is a very significant source of stress.

So there you have it. If you're curious, you can read the full report over at the APA's website; it might, however, be slightly more useful to look into some stress management strategies instead. And while you're at it, watch a funny cat video or two? Here's one to start you off: