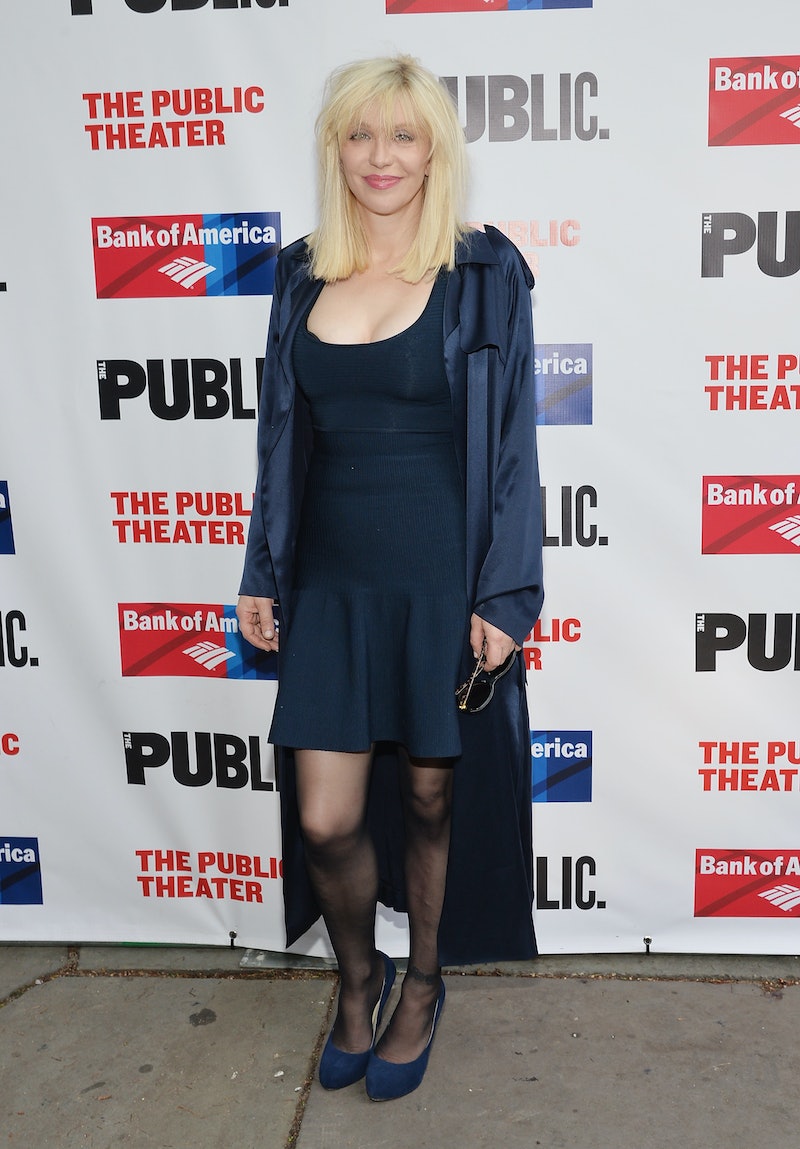 It's finally happening! After a month and a half of teases and promos, Courtney Love is finally coming to Empire on Feb. 11. The Hole singer and full time headline-maker is probably known to many as Kurt Cobain's widow, but the musician/actress is a powerful performer in her own right. Love plays Elle Dallas, a rock singer (how appropriate) who is one of Empire Entertainment's leading acts. It looks like Cookie will be taking over as her manager in the episode. The former Mrs. Lyon has done well by her first two clients, Tiana and Jamal, but can she work her magic on a hard-partying rock star? It will also be interesting to see Love work alongside Empire's uber-talented cast, though it's certainly not the first time she's shared the spotlight with great actors. Let's check out some of Courtney Love's greatest roles in TV and film.

Of course, you can't talk about Love without mentioning her music career, which came way before the acting. Love's band Hole is of the most successful female-fronted rock groups ever. Their 1999 album Celebrity Skin was nominated for three Grammys (and they earned one more the following year for their song "Malibu"). And, as the band's main songwriter, Love made sure that Hole's lyrics continuously reflected her feminist beliefs and her experiences as a woman.

Though acting has always been secondary to Love's music career, she's still made plenty of time to appear in movies and television. Here's the promo for her first Empire episode, "Out, Damned Spot."

Besides Empire, where else can you see Love onscreen? Here are a few of her most notable projects.

The People vs. Larry Flynt

This 1996 biopic told the true story of Hustler magazine founder Larry Flynt's life, including the Supreme Court case televangelist Jerry Falwell filed (and lost) against the publication. Love played Althea, Flynt's longtime girlfriend and co-founder of the magazine. As the film covered 35 years in Flynt's life, viewers got to see the actress's character evolve from a small-town girl to a savvy, powerful businesswoman, until she ultimately succumbed to AIDS. Love and Woody Harrelson, who played Flynt, both earned Golden Globe nominations for their performances.

200 Cigarettes is as close as we'll ever get to the defining '90s ensemble comedy. This movie's cast is basically a who's who of the entire decade: Kate Hudson, both Ben and Casey Affleck, Paul Rudd, Christina Ricci, Dave Chapelle, Scandal's Guillermo Diaz, Gaby Hoffman, and Janeane Garafolo are all featured in the movie, which takes place over a single New Year's Eve in New York City. Love and Rudd play best friends Lucy and Kevin, who spend most of the film trying to figure out if they're in love with each other, or if their relationship is better as platonic. Bonus: the movie was written and directed by women — still an unfortunately rare occurrence in Hollywood.

For Love's first time on TV, she picked a rather unexpected role: Ms. Harrison, a preschool teacher, on Sons of Anarchy . Ms. Harrison was Jax's son Abel's teacher, which means she got plenty of opportunities to deal with protective grandma Gemma. In real life, Love is every bit as bad as the SAMCRO matriarch, but I doubt even she wanted to tangle with Mrs. Teller-Morrow.