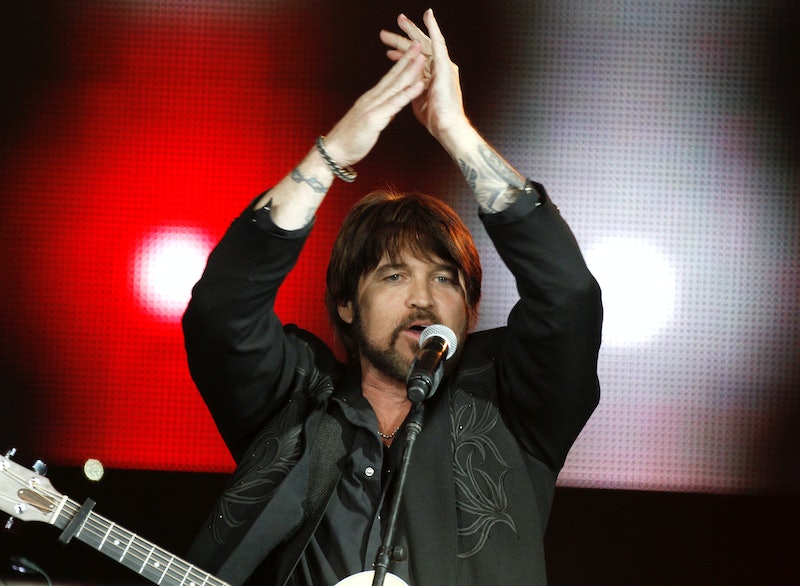 While Miley Cyrus is busy feuding with a '90s pop star, her dad is busy collaborating with an early 2000s pop star... on an '80s late-night program. On Thursday's Arsenio Hall Show, Billy Ray Cyrus performed "Lately" with Fred Durst. Nope, I know what you're thinking and no, this isn't a spoof. It actually happened. Cyrus, in a wool hat and leather jacket, did his best Scott Stapp impersonation and crooned about how oh so unhappy he is, and then, THEN, behind a plume of dry ice, former Limp Bizkit frontman Durst emerges and starts to rap.

I'm honestly dumbfounded. Like, did Billy Ray sit around wondering who could rap on his country-rock ballad and was all, Hmmmm. I know, Durst is probably free. His lack of relevancy will mix nicely with mine... Honey? See if you can use that Tweeter thang and get Durst on the horn!

Although the performance raises more questions than it could ever possibly answer, there is, however, one silver lining. Miley's documentary The Movement showed us where her mother has been throughout Miley's recent cries for attention and now, thanks to Arsenio, we know what her dad's been up to, as well. He's rocking out with Fred fucking Durst.